Yet despite this, the “premature obituary” narrative continues. In today’s essay, world-renowned cryptocurrency expert Teeka Tiwari explains why you should ignore the bearish headlines… and how bitcoin will continue to move higher from here…

Do you hear that?

It’s the deafening cries of all the bitcoin haters out there.

I want to show you why it’s critical that you ignore all the bitcoin naysayers… and start getting on board with bitcoin.

Believe me when I say it: Bitcoin is here to stay.

Not only that, it’s on the cusp of a massive move higher… along with the entire crypto market coming behind it. It’s a trend you’ll desperately want to be a part of.

So today, I want to tackle the biggest objection to bitcoin I hear… that it’s “worthless.”

Newsletter writers, journalists, and academics have called it a “Ponzi scheme.” Even JPMorgan Chase’s CEO Jamie Dimon—whose company has been fined billions for financial abuse—has called bitcoin a “fraud” whose value is “probably zero.”

Others like the idea in theory, but still have doubts. They are convinced the government will shut down bitcoin and render it worthless. If it were 2013, I would have agreed with them.

It looked like a classic “pump and dump” to me. That’s why I ignored it.

But then, something interesting happened.

Instead of collapsing back to pennies, bitcoin found support in the $200 range. Even after the bubble popped, bitcoin was still worth billions.

This intrigued me because true Ponzi schemes have zero value when they crash.

The fact that bitcoin was still attracting buyers even after the onslaught of negative news… an 85% price crash… and universal scorn… said something to me.

It said that maybe this asset had real value. At the very least, it told me that further investigation was needed.

Lessons From the Dot-Com Bubble

But again, something interesting happened…

In the depths of the dot-com hatred, Amazon started quietly climbing in price. Back then, I made the mistake of dismissing this action.

My error was buying into the prevailing belief that dot-com stocks were dumb and worthless.

I listened to the narrative instead of digging deeper into the Amazon story.

That was a mistake of lazy thinking. So when I saw the same thing happen with bitcoin, I decided to do something different.

Instead of listening to the skeptics, I asked myself: “Why are people still buying this supposedly worthless asset?”

That’s when I did a deep dive into bitcoin.

For the last 2 1/2 years, I’ve traveled the world interviewing experts, development teams, and venture capitalists. I wanted to understand why bitcoin has value.

Even Governments Are Embracing Bitcoin

Just as important, I wanted to know what would stop the U.S. government from banning it.

How would the currency outgrow its widespread reputation as a form of “black money” used by criminals?

What I found was this: At its core, bitcoin is just a way to send and receive value without the need for a “trusted” middleman. Bitcoin has no central location. That means no government (including the U.S. government) can ever shut it down.

In fact, several countries have already tried to ban bitcoin. Many have found (and will find) that it’s impossible. Others, such as Japan, have decided to recognize bitcoin as money.

Governments will continue to realize that it’s better to have a hand in how bitcoin is shaped and regulated than try to destroy it (which they can’t).

Think back to when the U.S. government finally realized that Prohibition was unenforceable. It was better to regulate alcohol and tax it.

The real strength of bitcoin is the underlying network of highly secure computers that support it. These computers run a new form of database called the “blockchain.”

Blockchain technology enables you to move money and data without having to rely on a trusted middleman. It’s truly revolutionary.

More than $4 billion per day is transacted across the bitcoin network… without the need for a central clearing authority. That has never happened before, and it makes bitcoin a unique asset.

As I write, software developers across the world are building applications designed to piggyback off this network.

Over the next three years, we’ll begin to see a slew of new applications emerge for bitcoin and the network that supports it. They will support everything from tracking assets to recording land registries… and much more that we can’t even think of yet.

That’s why bitcoin will continue to grow in value.

The next time you find yourself being scared out of owning bitcoin by a negative article, do yourself a favor… read about the last 300 times bitcoin was declared dead.

P.S. The bear market in cryptos is over. And this could be your last chance to get in before bitcoin goes to $65,000.

According to a recent Thomson Reuters survey, about 20% of financial firms indicate they will begin trading cryptocurrencies over the course of this year. A major national exchange has also announced it’s backing a bitcoin ETF.

There are several other tailwinds that will help push the crypto market up another 10 times from here, too. I’m so confident that cryptos will continue their epic rise this year, I’m giving away $2 million worth of bitcoin to new subscribers, just so they can see for themselves.

To learn how to claim your share of this giveaway, plus receive my full list of 32 cryptocurrencies to buy right now, watch my free presentation here…

Chart of the Day: Bitcoin’s Resurgence

That’s the story of today’s chart, which tracks bitcoin’s price from July 2017 through today. 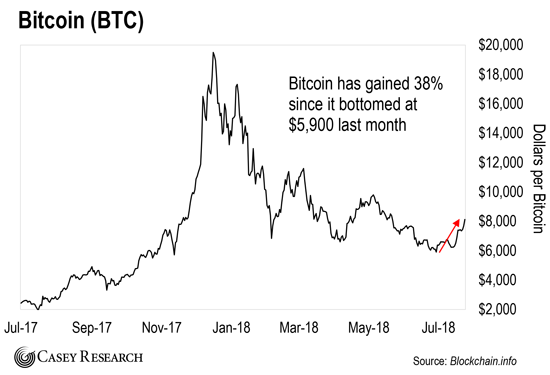 This month’s big move came after the Chicago Board Options Exchange (CBOE) filed an application with the Securities and Exchange Commission (SEC) for a bitcoin ETF.

What’s more, the CBOE will maintain insurance coverage on the ETF to protect against the loss of bitcoin through theft, fraud, destruction, or transfer problems. That would allow for large institutional funds to take sizable positions in bitcoin on behalf of their clients.

This is big news.

A bitcoin ETF would make buying bitcoin as easy as logging into your brokerage account and pressing the “buy” button. This could open the digital asset up to a wave of capital from investors who otherwise would not invest in bitcoin due to its complexity.

Justin’s note: If you listen to the mainstream press, you might think that bitcoin is a passing fad. But Teeka has uncovered something that the financial press isn’t reporting. And it could cause investors to miss out on the biggest gains in the crypto space yet. He calls it “The Great Crypto Conspiracy of 2018.” To make sure you don’t miss out, get all the details from Teeka right here.

Today, readers respond to Monday’s Dispatch: “The Trouble With a $5 Coke”…

Is it any wonder that millennials favor socialism? Remember, the basis of this free market system is that workers earn good salaries, sufficient to allow them to purchase goods, which in turn drives industry to produce those goods, which in turn should allow them to pay good salaries—a virtuous cycle. But this virtuous cycle has broken down, leaving millennials earning subsistence McWages, unable to accumulate wealth and possessions and afraid to complain, lest they be replaced by other workers or machines. Minimum wage laws are not the cause of this problem, but an attempt to fix the problem, as is universal income.

Here is a very straightforward example of the minimum wage discussion. It is amazing that most folks don’t understand the simple concept of supply and demand. You could use this to explain the concept to people who are misguided!