Rachel’s note: Regular readers know we believe we’re in the middle of a massive tech boom. It’s bringing the biggest advancements of our lifetime…

And the way to profit as this trend ramps up is by finding the best stocks… that Main Street’s never heard of.

That’s why today, we had to share this opportunity from our friend and tech expert, Jeff Brown. He’s known by many as Silicon Valley’s top angel investor.

And on Wednesday, September 23, at 8 p.m. ET, he’ll reveal a special subsector of the tech market… with some of the biggest profits on offer. In fact, his first recommendation of one of these stocks gave his readers the chance at 432% gains.

You don’t want to miss it. Just go right here to reserve your free spot.

Here’s Jeff with more below…

Investing in recent years has been a rigged game.

How do I know? One simple illustration will show what I mean…

Amazon went public on May 15, 1997, just under three years after its founding. At the time, it was still a relatively small company. Its enterprise valuation was a mere $438 million. It generated $147.8 million in revenue that year and just $2.7 million in free cash flow in 1998. 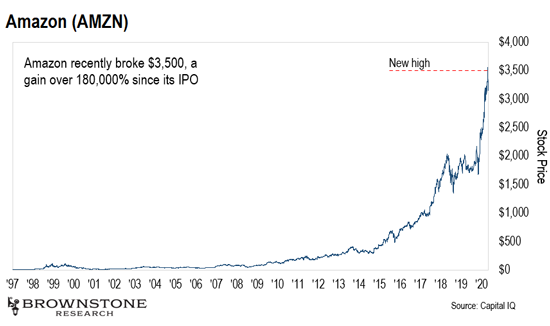 Investors who got in early made a fortune.

The best part… Every retail investor had an opportunity to get in on those investment returns. Anyone who had a brokerage account could have enjoyed those gains.

But sadly, the opportunity to invest early has almost disappeared.

Uber is a perfect example. It went public last year on May 9 at $45 a share.

But what many retail investors didn’t realize was that Uber was nearly nine years old when it went public. It was valued at over $74 billion already. Compare that to Amazon…

And where is UBER today?

It trades around $36 and change, still down over 20% since its initial public offering (IPO). Not only that, but the company will lose almost $4 billion in negative free cash flow this year, $1.3 billion next year, and $600 million in 2022. It sits on $8.4 billion in debt and isn’t forecast to turn a profit until 2024.

Investors at the IPO got their faces ripped off by Wall Street, which had told them this stock would be the next big thing. But this wasn’t the explosive winner that they were promised…

And we’ve seen a similar pattern in many of the “hot” IPOs that have emerged in recent years. It’s become nearly impossible to find opportunities with the same potential as Amazon 20 years ago.

For example, at writing, Uber competitor Lyft is still down 59% from its IPO… and The We Company, of WeWork infamy, ended up indefinitely delaying its IPO (and dropped down over 90% from its peak valuation)…

So where have all the good investments gone? Where is the chance to invest in the next Amazon?

They’re still out there. But 99% of retail investors are “locked out.”

That allows them to capture the majority of the investment upside while selling overvalued shares to the public.

This is done intentionally, because the largest investment gains come from investing at the earliest stages and selling when a company becomes a multibillion-dollar corporation.

Sometimes they will keep a company private for a decade or more. And then, when the company has become overvalued in the private markets, they push it to go public so they can dump their shares on retail investors – often at an even higher valuation.

The reality is that normal investors are left with the equivalent of table scraps. And in some cases, they are buying into companies that are overhyped and way overvalued, just like the examples mentioned above.

Buying in at those levels is a surefire way to lose money on an investment.

That’s why, for the last five-plus years, my goal has been to change that. I’ve been on a mission to find a way to bring the best early stage investments to my readers… companies with the potential to bring investors life-changing gains.

And I think I’ve found the answer…

It’s all in a small subsector of the tech market, a class of stocks I call “Penny IPOs.” Why?

Because these stocks are still tiny when they go public… especially compared to huge billion-dollar companies like Uber. And these stocks have the same potential for earnings as Amazon did back in 1997.

I’ve seen these stocks jump hundreds – and on occasion, thousands – of percent in a single day. But hardly any investors know they exist.

And what’s even more exciting… This tiny subsector is coming up on a very special time that I call the “4X Window.” That’s when we’ll see these explosive stocks go into hyperdrive.

It’s a chance I don’t want any of my readers to miss out on.

That’s why I’m hosting a very special presentation – Penny IPOs: The 4X Window – on September 23 at 8 p.m. ET. While we’re there, I’ll show you why these stocks can be so powerful… share what exactly the 4X Window is… and tell investors how you can add these trades to your portfolio right away.

Go right here to reserve your spot. I hope to see you there.