This past Friday, I spent the day in Toronto on the 18th Hole of the Canadian Open.

The event is a major stop on the PGA Tour. The weather was perfect, and it was a great spot to watch some of the world’s top golfers. 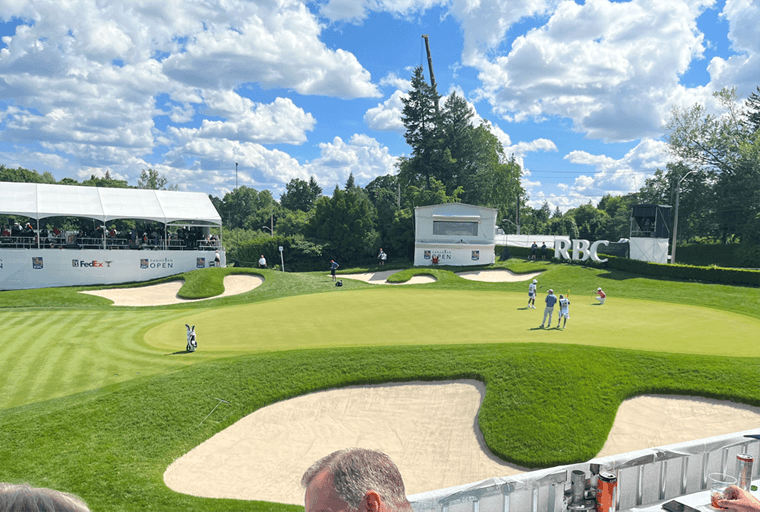 But golf wasn’t the main reason I came.

The event was part of a mining gathering. This week, one of the world’s biggest mining conferences hits Toronto: The Prospectors and Developers Association of Canada (PDAC).

The PDAC attracts the biggest names in mining. Companies, investors, and geologists visit Toronto for a week of important meetings, schmoozing, and dealmaking.

At the golf event, I ran into an old associate. I hadn’t him seen in years.

His business is connections. He has a rolodex of huge firms in Asia – companies leading in major industries like materials, chemicals, and manufacturing.

Many of his Asian clients are into mining. They want captive metals supply to feed their business empires.

I saw this in action several years ago. This same colleague of mine brought one of the biggest conglomerates in Asia to one of my projects…

Whispers of Copper Turned Into Riches

At the time, I was pursuing copper in eastern Colombia. It was a wild idea, totally untested.

I’d been working on gold in central Colombia for several years. During my time in the country, I kept coming across mentions of rich copper mines east of the capital city, Bogotá.

These were just whispers. Little notes in old scientific papers, some going back to the 1940s.

But they intrigued me. It sounded like there was potential for a completely new copper mining district.

Eventually, a friend and I rented a car one weekend. We drove from Bogotá out to the supposed copper area.

It turned out to be a beautiful spot. Majestic waterfalls spilled over spectacular valleys. The terrain was so striking, they’d built one of Colombia’s biggest hydroelectric dams there.

There also turned out to be a lot of copper.

We checked into a hotel in a local village. Casually, we asked the girl behind the counter about mining.

Her father turned out to be an old miner. He’d settled down, opened the hotel, and eventually become mayor of the little town.

But he knew the mining history of the area. Each day, he’d jot down points on a map. Visiting them, we found high-grade copper all across the region.

Putting it all together, we realized the project needed big funding. It was a huge area, with almost no work done in modern times.

I called my associate and asked about his Asian connections. He had the perfect fit: one of his conglomerates was looking for copper feed to send to Mexico. They’d just bought a copper facility there and needed more supply.

We arranged a visit, and the management of this huge firm came to Colombia. We spent three days touring them around the hills to the copper mines.

On the last night, it culminated in a massive party on a farm just outside of town. People came from all across the land. At peak, I think there might have been several hundred partygoers.

All that is to say, my friend has some big connections…

At the golf event last week, my friend told me that those massive investors are up to big things…

Most interesting: they’re looking for these strategic metals in North America.

According to my associate, these Asian conglomerates all have plans for huge battery factories in America, Canada, and Mexico. They’re looking for metals supply to feed these plants.

He’d just made a deal with one major group on a cobalt project in Idaho. He said there are several more deals on U.S. mining projects percolating.

That’s a very different view than we’re getting in the mainstream press. Goldman Sachs made headlines the last few weeks saying the battery metals bull market is “over.”

But the news on the ground is far different. Big investors are still putting up money for battery metals projects. According to my friend, they’re even looking at exploration projects.

Stocks corrected after Goldman’s big call. With the fundamentals still going strong, this could be a buying opportunity – if you get into the right companies.

As always, I’m digging in to find the best stocks. I’ll be at the major PDAC conference all week.

Watch for more updates on everything I find at the booths, the conference floor, and the all-important nighttime events, where most of the real business gets done.