Editor’s note: Here at Casey Research, we don’t want you to just survive this crisis. We want you to turn panic into opportunity. That’s why today, we’re sharing a piece from our colleague Jeff Clark.

Jeff’s a former money manager who’s been following the market for decades. And he’s made millions for his clients, in both bear and bull markets, by following a few key indicators that keep him one step ahead of mainstream investors.

For Jeff’s take on the recent crash… and to learn how you can profit during this bear market… click here. Then, read below on how Jeff saw this market crisis coming…

That’s just some of what folks said about my prediction last year that the stock market would crash.

But, what if I’m not one of those people?

What if I’m just a guy who has been following the financial markets for nearly four decades?

What if I’ve made plenty of bold calls – many of which have been dead-on accurate?

And what if, when I made that call, I noticed that many conditions in the stock market were eerily similar to conditions that preceded bear markets before?

Folks… that’s not fearmongering. That’s just suggesting, as the storm clouds build in the distance, that you might want to carry an umbrella.

And I hope my readers listened. Because the market, of course, did crash. And it was even uglier than I anticipated…

Let me show you the main thing that tipped me off back then.

Take a look at the S&P 500 plotted along with its 20-month exponential moving average (EMA), shown in the top half of the chart below… 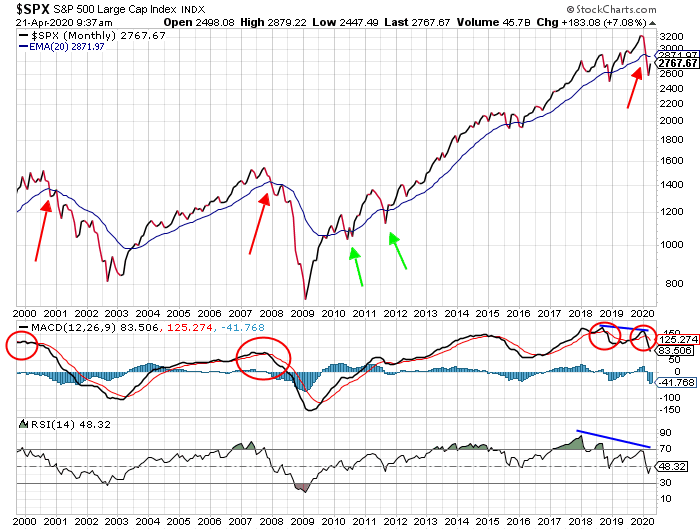 I use this chart to define bull and bear markets. It may look intimidating, but it’s actually rather simple: If the S&P 500 is trading above its 20-month EMA (the blue line), stocks are in a bull market. If the index is trading below the line, the bear is in charge.

You can see how the decisive breaks of the 20-month EMA led to the nasty bear markets that started in late 2000 and early 2008 (marked by red arrows on the chart).

You can also see that 20-month EMA line was broken this year at the beginning of March (also marked with a red arrow). So, the bear market is on.

But, we had several clues to suggest this would happen, well in advance.

The MACD indicator at the bottom half of the chart provided one of the early warning signs of a bear market.

Notice how in 2000 and 2007, the MACD indicator gave us that “bearish cross” from extremely overbought conditions (the red circles on the above chart). In both cases, the S&P 500 dropped into a bear market a few months later.

It’s these two indicators – the EMA and MACD – working together, that paint the clearest picture of an imminent bear market.

That’s why the market didn’t crash when the S&P 500 dropped below its 20-month EMA in 2010 and 2011 (the green arrows on the chart). In both of those situations, the MACD was more neutral than overbought. There wasn’t a bearish cross in 2010. And in 2011, the bearish cross reversed before the end of the year.

So, we didn’t have the conditions necessary for a bear market back then.

But in October 2019, the storm clouds looked a little more ominous. The MACD indicator had already completed a bearish cross in November 2018 (circled in red). And, it never made a strong reversal as it did in 2011.

Instead, the black and red lines stuck together. The bullish momentum never returned. And that was another significant warning sign.

Of course, the stock market did recover from the December 2018 breakdown. And, the S&P 500 did manage to make a new all-time high in July.

But, that action created negative divergence on both the MACD and Relative Strength Index (RSI) indicators – marked by the blue lines in the bottom half of the chart.

Negative divergence – when a chart makes a higher high but an indicator makes a lower high (shown by the blue lines above) – tells us that the momentum behind the rally is waning. It’s a sign of a potential change in trend from a bull market to a bear market.

So we had multiple “bearish crosses” on the MACD… and negative divergence on the MACD and RSI… and we had a breach of the 20-month EMA. If you’re looking for clear proof that we’ve entered a bear market, you could do a lot worse.

If you’re looking for more proof, though, I share a few other reasons in a special presentation I recorded recently. You can click here to watch it.

P.S. The bear market is here. There’s no denying it.

It will be a scary time for most everyday folks who own stocks. Long-term investors who aren’t prepared (and that’s most of them) could soon lose a lot of money…

But not traders. Traders don’t fear market crashes. In fact, we get excited for them. As scary as they seem, they can be a goldmine for trading profits…

I urge you to take a look at what I have to say about this crash. It could mean the difference between losing everything you’ve built up, or actually profiting as the bear market transpires. Just click here to get the full story.