Chris’ note: Regular readers know we focus on bringing you the best investing ideas that the mainstream often overlooks. And from time to time, we like to turn to trusted pros outside of our network.

That’s why today, we’re handing the reins to Silicon Valley insider Jeff Brown, one of the top tech experts in the business.

Jeff’s used his 25 years of experience in the sector to identify the best money-making opportunities for his readers. In fact, he picked the top-performing stock of 2016 and 2018 on the S&P 500 – before almost anyone had heard of them.

So when Jeff talks, it pays to listen. And he recently shared his predictions for which technologies – from self-driving cars to disease-curing devices – will make the most impact in 2020. You can read them all below…

It has been an incredible year for technology…

5G wireless networks are going live in cities around the world on a weekly, sometimes daily, basis. Artificial intelligence (AI) is accelerating faster than anybody predicted. And precision medicine technology is on the cusp of rewriting health care as we know it today.

This is such an exciting time to be a technology investor. And we have a lot to look forward to in 2020.

As we close out 2019 and look toward the new year, I’d like to share with you my top five predictions for the world of high technology. This will prepare you for 2020 and inform better investment decisions.

Prediction No. 1: A Tidal Wave of 5G Devices

My first prediction has to do with 5G wireless networks.

As a quick refresher, 5G is the next generation of wireless network technology. And as my longtime readers know, 5G will average speeds that are 100 times faster than 4G networks. 5G will also have incredibly low latency, or delay.

In 2019, we saw the first 5G-enabled smartphones go up for sale. There are now 10 5G smartphones available for purchase.

But in 2020, I predict we will far exceed even the most optimistic projections for shipments of 5G devices. The current forecast is that there will be about 300 million 5G-enabled handsets sold. But that number is far too low.

Earlier this month, Apple reached out to its suppliers to increase its manufacturing numbers in preparation for the 5G-enabled iPhone launch, which we expect to come next September.

Apple told suppliers that it now expects to ship more than 100 million 5G-enabled iPhones. That’s up from the company’s previous projection of 80 million 5G iPhones.

And keep in mind that Apple only has about 12-13% of global market share for smartphones.

My point is that if Apple plans to sell 100 million 5G iPhones, how many 5G devices will Samsung, LG, Huawei, and the other big global manufacturers sell?

Prediction No. 2: Buy Your Own Self-Driving Car

My second prediction is that 2020 will finally be the year that we will be able to buy or lease our own fully autonomous car – for your own personal use. It will be able to take you from point A to point B. And the car will drive 99% of the way by itself.

I’ve been covering the development of self-driving cars extensively. And 2020 will finally be the year when they go mainstream.

Remember that self-driving vehicles rely on artificial intelligence. They must “learn” how to be safe drivers. And the underlying semiconductor technology used for AI will double in power over the next 12 months. The amount of data that’s being collected from fully autonomous vehicles will more than double year-over-year.

And the AI algorithms – the software that makes self-driving cars possible – is improving significantly every month. So, the AI algorithms won’t be twice as good from 2019 to 2020. They’ll be about five times as good as what we have today.

That means we’re getting to the point where these cars are essentially fully autonomous. It’s just a matter of time before a company puts one of these cars up for sale. I believe that will happen in 2020.

We’ll have to wait and see which company it is. But Tesla would be a prime candidate.

My Interview With Glenn Beck

By the way, I recently had the chance to sit down with the one and only Glenn Beck and talk about all things technology on his podcast. It was one of the most enjoyable things I did all year.

Glenn is really passionate about technology, what it is going to bring to the world, and the impact that it will have on society.

Our discussion is completely unscripted, and we covered a wide range of exciting topics in the world of high tech. If you have some spare time in the next day or two, I’m confident that you’ll enjoy it. You can watch it by going here or clicking the image below. 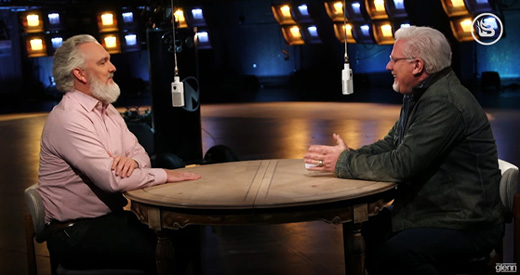 On to prediction No. 3. This prediction has to do with CRISPR genetic editing technology.

As a reminder, CRISPR can edit our DNA as if it were software. It can fix – or edit – any mutations in our genetic code that can cause disease.

In November, I attended a biotech conference called the STAT Summit.

One of the most incredible presentations at the summit came from Vertex Pharmaceuticals (VRTX) CEO Jeffrey Leiden.

Vertex has been working with CRISPR Therapeutics (CRSP) on a therapy for sickle cell disease and beta thalassemia. Bad mutations in the hemoglobin gene cause these blood disorders. The therapy is CTX001.

And Leiden stated directly, “We have essentially cured these diseases. We have cracked the biology of sickle cell and beta [thalassemia].”

Of course, it is not FDA-approved yet. The next step for Vertex is to expand the clinical trials to another 45 patients. I’m expecting identical results compared to the first two patients.

But going off Leiden’s comments, it appears CRISPR technology has cured these diseases caused by genetic mutations.

I predict that CRISPR will cure at least five more diseases caused by genetic mutations in 2020.

To be clear, I don’t expect that five therapies will be approved by the FDA in 2020. But I believe at least five CRISPR therapies will demonstrate in either preclinical or clinical trials that they have cured the diseases they were meant to cure.

I think it goes without saying that I’m very bullish on CRISPR and the biotech space for next year. Expect to hear more in 2020.

For prediction No. 4, we turn to the world of blockchain and digital assets.

I predict that China will launch a digital version of the renminbi – its currency – sometime next year. In fact, it could happen in the next few weeks.

And this could serve as a major wake-up call for the U.S. The United States has been slow to adopt this technology. But if, in the months after launch, the digital renminbi is widely adopted and used, then it will absolutely light a fire under the U.S. to do the same.

Mark my words. The age of fiat currency is coming to an end…

In September of 2019, we reached the point of quantum supremacy.

That’s the point at which a quantum computer can outperform the most powerful classical supercomputer on Earth. Here’s what happened…

Google ran tests on its 53-qubit quantum computer. In those tests, it gave the quantum computer a task that would take the world’s most powerful supercomputer, Summit, 10,000 years to complete.

The quantum computer finished in three minutes and 20 seconds. Beyond amazing.

The world will see its first 256-qubit quantum computer. And I’ll tell you why that’s important.

But the moment you have a 256-qubit quantum computer, you can crack that encryption software in milliseconds. It’s over…

Obviously, the cybersecurity company that can address this problem would be a great investment target. I’m actively searching for such a company.

So just to conclude, if you thought 2019 was interesting for the world of technology, just wait until 2020. I for one can’t wait to see what the next year holds.

P.S. If investors are wondering where to invest in 2020, let me answer that question for you: technology…

Mark my words, the biggest fortunes will be made in tech next year. The advancements over the next few years will dwarf all the achievements of the last 100. There has never been a better time to be a technology investor.

And if you’re wondering where to start, I strongly encourage you to learn about my No. 1 tech stock for 2020. Go right here.