Practically every major asset ended last year in the red.

Investors would have been much better off holding cash or “cash substitutes,” as I showed you in yesterday’s Dispatch.

And there’s a good chance cash outperforms major indices like the S&P 500 and the Nasdaq.

But you’re probably not going to move all of your wealth into cash. And you shouldn’t. That would be just as reckless as being all-in on stocks.

What stocks should you own in this environment?

If you’ve been asking yourself this, you’re in luck.

That’s because a special kind of stock is poised to deliver huge returns this year… even if the market at large continues to sell off.

These companies are leveraged to the price of gold. This means it doesn’t take a big move in gold for them to take off.

And that’s what we’re seeing today…

See for yourself. The chart below shows the performance of the VanEck Vectors Gold Miners ETF (GDX). This fund invests in a basket of gold mining stocks. 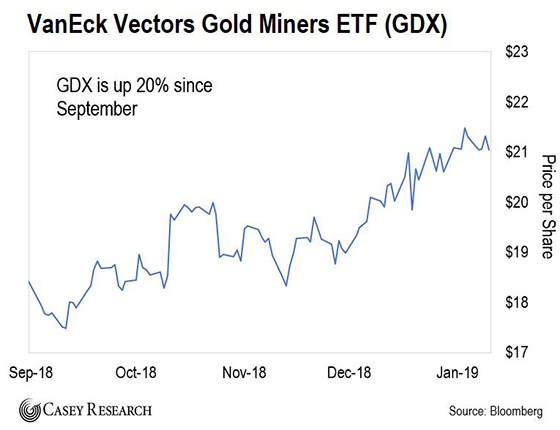 You can see GDX has rallied 20% since its low last September… courtesy of an 8% jump in the price of gold. For comparison, the S&P 500 fell 11% over the same period.

In other words, gold stocks bucked the overall trend of the market. They’re rising when practically everything else is falling… and this should continue.

E.B. is the editor of Strategic Investor. He’s also one of our in-house experts on gold. And he’s bullish on the commodity today… Here’s where he sees the gold price heading in 2019…

We’ve seen three very big moves in the price of gold in the 21st century. That’s one roughly every six years.

We’re about due for the next one and it’s likely to be the biggest yet.

But we’re not calling for that in 2019. This year, I believe the price of gold will hit $1,500 an ounce. It will be one of the best-performing markets in a very volatile year for equities.

Of course, this begs the question… why would gold likely head much higher?

Well, there are many reasons. For one, gold is a safe-haven asset. It tends to do well when other assets, namely stocks, do poorly.

Regular readers know why I think this.

Right now, there are several key indicators flashing danger in the banking sector and credit markets. If you’re new to the Dispatch, make sure to catch up here and here.

But there’s another indicator that’s signaling more trouble ahead…
Below is a chart of the S&P 500 going back to 1992. The three red lines represent the uptrends of the last three major bull markets. 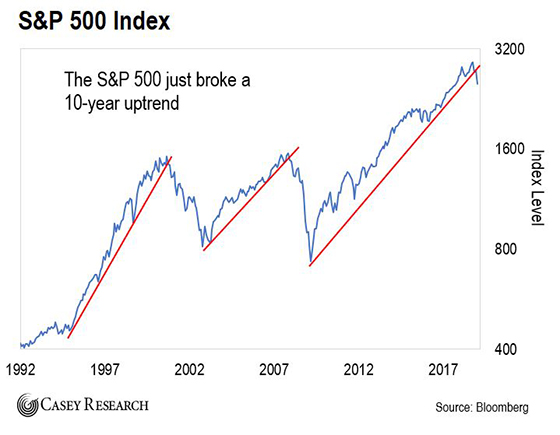 Notice what happened the last two times that the S&P 500 pierced a multi-year uptrend.

As you can see above – it recently broke an uptrend that’s been in place since early 2009.

As stocks fall, more people should flock to gold. This, in turn, will bode well for gold stocks.

But there’s also another reason you should consider speculating on gold stocks.

You can see what I mean below. This chart shows the Gold Bugs Index (HUI) – an index that tracks gold stocks – relative to the S&P 500.

The lower this ratio, the cheaper gold stocks are relative to large U.S. stocks. 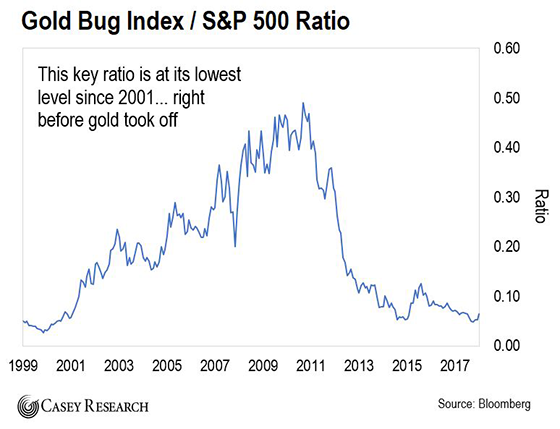 You can see that this key ratio is as low as it was in early 2001… just as gold was beginning a huge bull market.

You can easily do this with GDX. This fund will give you broad exposure to gold stocks. That makes it a relatively safe way to bet on higher gold prices.

Just understand that gold stocks can be highly volatile. Don’t bet more money than you can afford to lose. Use trailing stop losses. And take profits when they come.

One reader tells us how he invests in gold – in a similar way to Strategic Investor editor E.B. Tucker…

I own several numismatic U.S. gold coins. I own buffalos, gold eagles, etc. I only buy from the mint because I think the online dealers cull what they buy. They market PGCS grades and what doesn’t have PGCS value gets sold to customers. I might not get a “70” from the mint, but I feel my purchase hasn’t been sorted and I may get a “70.” I only buy proof coins if available.

Tonight at 8 p.m. ET, E.B. Tucker will go on record with his next big prediction during a free investment summit. In short, he believes we’re looking at the growth of a new market from essentially $0 to potentially $400 billion in a matter of years. And three well-positioned stocks are expected to take the lion’s share of profits.

You don’t want to miss this. Go here to register for free…