That was the first question I asked my guide.

It was blunt – I’ll admit it. But I wasn’t trying to be rude… I was genuinely curious.

You see, I was at a coffee farm… And coffee’s taken a beating lately. Take a look: 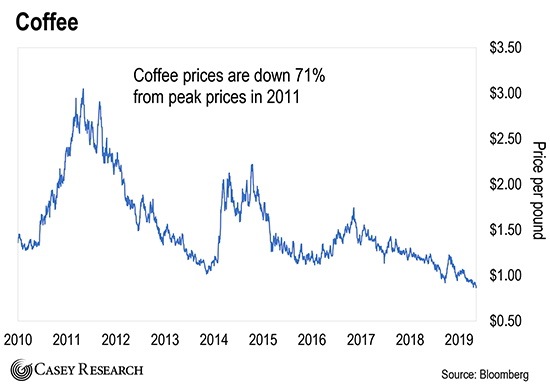 But first, let me tell you why I went to a coffee farm.

• I was recently in Salento…

Salento is a small, charming town in the department of Quindío, Colombia.

It’s a favorite among Colombian vacationers and, increasingly, international travelers. And it’s easy to see why.

Just look at this photograph of me at Cocora Valley, which is about a 20-minute drive from the heart of Salento. 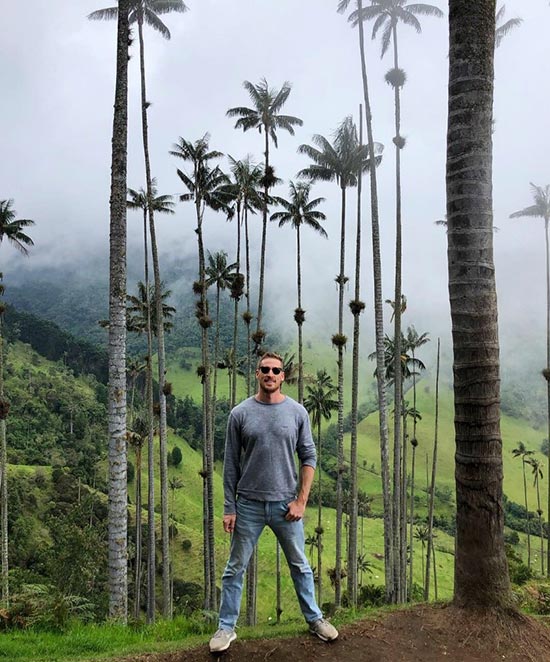 But this region isn’t just home to the world’s tallest palm trees. It’s also one of Colombia’s major coffee-growing regions.

So I decided to get a firsthand look at the industry while I was there. Here I am at one of the town’s coffee farms: 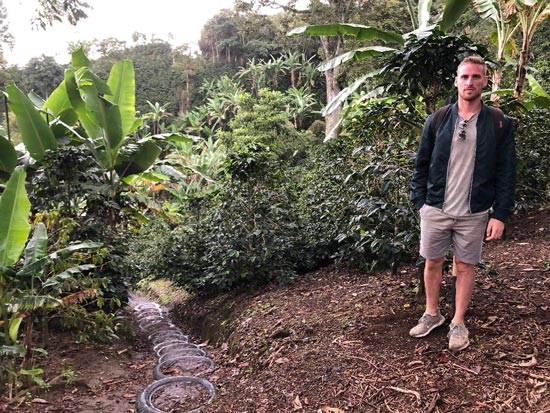 Now, I know you can’t tell from this photo… But this coffee farm is struggling.

• That’s because the price of coffee has been obliterated…

That’s why I didn’t beat around the bush with my question.

Thankfully, my guide wasn’t offended when I asked him how the farm survives. He knew where I was coming from.

He even fired back with a straightforward response.

He simply said, “you.” He went on to explain how the farm survives on tourism.

It offers tours. And it sells coffee exclusively to tourists at this point.

The farm’s also switched to growing other, more profitable crops and raising livestock.

It’s not alone, either.

So they’ve moved on from coffee. They’ve shifted production to other crops, namely avocados.

The situation is so bad that Colombia, along with other countries, is considering disconnecting its coffee sales from market prices in New York.

Why am I telling you all of this? It’s simple.

• We love a good crisis here at Casey Research…

It’s our bread and butter.

That’s because crises are actually opportunities in disguise. Often, they allow you to buy world-class assets for cheap, sometimes for as little as pennies on the dollar.

And soft commodities like coffee are some of today’s most beaten-down assets. Take it from our founder Doug Casey:

Agricultural commodities are also extremely cheap. In fact, as we speak, wheat, corn, and soybeans are hitting 10-year lows. In real terms they’re near all-time lows.

In fact, Doug recently told me that the “chances of small resource stocks going 10-to-1 are very high at this point. Some individual stocks could go 100-to-1.”

• That’s why I toured a Colombian coffee farm…

I wanted to see if a crisis opportunity was shaping up.

And this site visit confirmed what I found in my research: The coffee market is in trouble.

But you shouldn’t buy an asset just because it’s cheap and hated. You also want to see sentiment improve before diving in.

We’re not seeing that with coffee yet. Just look at this six-month chart: 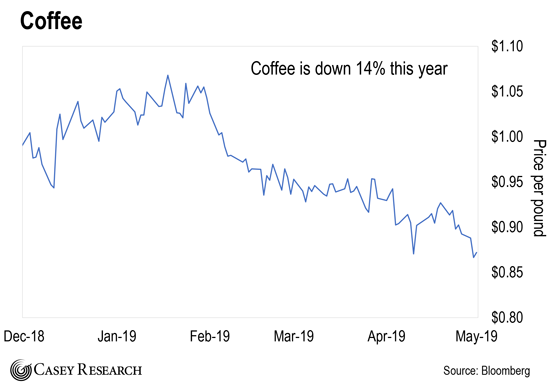 You can see that coffee’s been plumbing new lows lately. It’s yet to “carve a bottom.”

Regular readers know that happens when an asset stops falling, trades in a tight range for a period of time, and then starts moving higher. This signals that buyers have stepped in and given the asset’s price a “floor.” It’s a major clue that the asset is ready to climb.

Of course, there’s a reason coffee hasn’t bottomed out yet.

• There’s a global glut of coffee…

The market is still oversupplied to the tune of 137 million kilos.

That’s weighed on prices, even though U.S. demand for coffee is at record highs.

Brazil’s a big reason for this.

You see, Brazil is the world’s biggest coffee producer. Last year, it produced more than 3 billion kilograms of coffee beans… nearly double the output of Vietnam – the world’s second-biggest producer.

And thanks to a huge depreciation in its currency, Brazil’s been flooding the market with cheap coffee beans.

That’s led to a worldwide surplus and depressed global prices.

Of course, there’s an old saying in the resource space…

This is the idea that low commodities prices lead to production declines. Eventually, that will bring supply and demand back in order to lift prices.

But again, we’re not seeing that happen yet. So now’s not the time to back up the truck on coffee.

Instead, we’re keeping a close eye on it.

Take it from Dave:

If you know what you’re doing, now is a superb time to buy. Regrettably, most people don’t get involved in any market until it’s made a big move. They’ll hear commodities touted on TV, and friends are discussing them at cocktail parties. And pile in near the top.

The best time to get into any market is when it’s fundamentally cheap, there’s no interest in it, and it’s showing signs of going up. Commodities cover all those bases but the last. However, even though they aren’t moving up yet, they’re bottoming.

Dave is the editor of International Speculator. He’s also, as I mentioned earlier, our in-house commodities expert.

And he believes we’re on the verge of the biggest commodity bull market in 50 years.

Now, you could take advantage of this by buying the Invesco DB Commodity Index Tracking Fund (DBC) or another fund that invests in a basket of commodities.

But Dave thinks you’d be much better off betting on two of today’s stand-out commodities.

• I’m talking about platinum and uranium…

Now, platinum and uranium are obviously very different. They have different use cases. Different forces impact their prices.

But these metals have something important in common right now.

They’re both irrationally cheap. In fact, Dave tells me they’re both trading below the cost of production. That means the typical producer can’t break even.

And Dave would know.

He calls it the “Casey Cost Curve system.” Essentially, it identifies commodities that are so beaten down that they must rise in value.

That’s the case with platinum and uranium. They’re standouts on Dave’s system.

But unlike coffee, platinum and uranium are already trending higher. In fact, platinum’s up 12% since August 2018. Uranium is up 16% over the past year.

So consider speculating on platinum and uranium today. Both metals offer big upside with little downside at the moment.

I also encourage you to check out this recent interview that I did with Dave. In it, he explains exactly why he’s so bullish on platinum and uranium.

This is something you won’t hear about in the mainstream media… but thanks to a new Executive Order, something called “liquid electricity cubes” could soon be installed in your neighborhood.

Dave says these mysterious “cubes” are a mega-industry set to explode as high as 6,400%. They’ll send one specific, obscure metal soaring. And he’ll explain how you can cash in big this year. Go here to see how.

Today, readers respond to Doug’s piece on why he lives in Uruguay…

Mr. Casey, don’t you find that socialist ideas in South American countries are crushing societies and the working-class people? Do you think if we can help Venezuela become more capitalist and democratic, it will spread to others in the region as in Brazil?

Hello Doug… we lived in Paysandú for seven years and we were farming in Porvenir. After reading your article about how law enforcement can’t be bribed, let me tell you that’s all I ever did… never did get an official ticket. 1000 pesos usually did the job, at least inland was a little different than the coastal areas.

And another subscriber writes in with high praise, agreeing with Doug…

Doug, I really should stop reading your columns, since you merely confirm my worst fears.

I too believe we’re on the cusp of an economic collapse, or at the least, an adjustment that will make our last recession seem like a fart in a hurricane.

We now have a totally fiat currency, as do practically all advanced nations and economies of the world – the moment one of the major trading nations begins to demand payment in something other than conventional and previously accepted currency the entire edifice will begin to crumble. I believe the best we can hope for will be runaway inflation, hopefully not as extreme as that which afflicted the Weimar Republic. Obviously, that was engineered by Germany in order to pay off the reparations demanded by the Allies, which, perversely led directly to WWII.

I always enjoy your columns.

Former money manager E.B. Tucker is revealing a unique security that could make you 1,000%-plus gains in 2019.

It’s something E.B. calls “premium shares.” And no, it’s not cryptos, stocks, or options… but you can make huge gains on big and small companies alike.

E.B. shares everything you need to know in what we’re calling the “Stock Market Escape Summit,” which you can watch right here. But keep in mind, this opportunity won’t last long.

Learn how to get in on 1,000% gains before we have to take this video down. 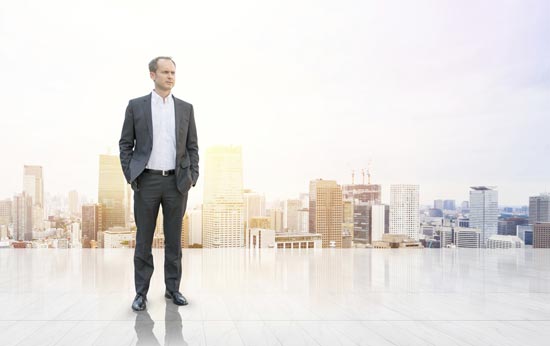