Are the markets oversold?

This question is on everybody’s mind. After one of the worst episodes of market volatility, investors wonder if now is a good time to buy.

There are early signs that it is.

For one, corporate insiders have started buying shares on a massive scale. The Financial Times reported that in May, insider share purchases increased to pre-pandemic levels.

This is good news for the battered stock markets.

But I am even more optimistic about one, tiny segment of the markets right now…

Because, as our expert Dave Forest has been saying for weeks, it’s entered a “Super Spike” window.

He makes a great case that a Super Spike window in the commodities sector is currently open… and that these spikes make investors who position themselves early rich.

The situation is so urgent that he’s hosting a special broadcast about it next Wednesday, June 8 at 8 p.m. ET. Sign up for free and learn more about Dave’s blueprint for finding and profiting from these Super Spikes.

As for today, I’ll go through why the Super Spike window is here… and how you should position yourself to profit.

Liquidity in the System Supports a Super Spike

As Dave Forest outlined in his recent analysis, there are several conditions that lead to Super Spikes. And the first one is liquidity.

Take it from Dave:

Liquidity is the most important factor for a Super Spike to happen. After all, if there isn’t enough liquidity, the whole market grinds to a halt. That’s what happened during the Global Financial Crisis of 2007-2008.

Liquidity in the global financial system dried up, and it caused catastrophic consequences such as defaults and bankruptcies.

And much like a lack of liquidity sends markets south, readily available liquidity could create a Super Spike.

From a technical standpoint, there’s plenty of liquidity in the economy if you look at the M1 aggregate.

The M1 aggregate constitutes demand deposit and checking accounts. This is the money that is most commonly used as an exchange medium.

An increase in M1 puts more money in the hands of consumers, which stimulates demand. The latest numbers from the Federal Reserve tell me that this liquidity metric is at record levels. 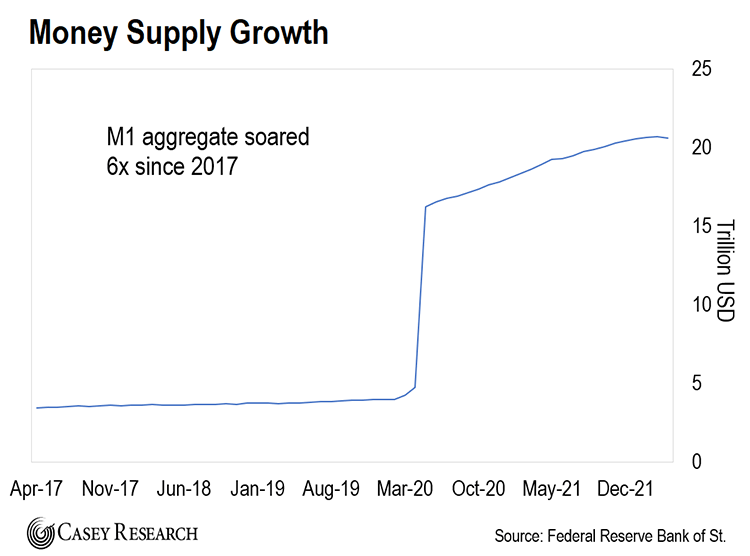 Over the past five years, this liquidity measure has increased sixfold.

Most of the growth came during the pandemic. This money has stayed in the financial system… where it supports consumer demand and, as Dave Forest has mentioned, creates excellent conditions for a Super Spike.

You can consider liquidity from a different perspective. At the corporate level, you can estimate the value of liquid assets by how much cash and short-term investments companies have on their balance sheets.

As of December 2021, the S&P 500 Index companies held over $8 trillion in cash and investments. 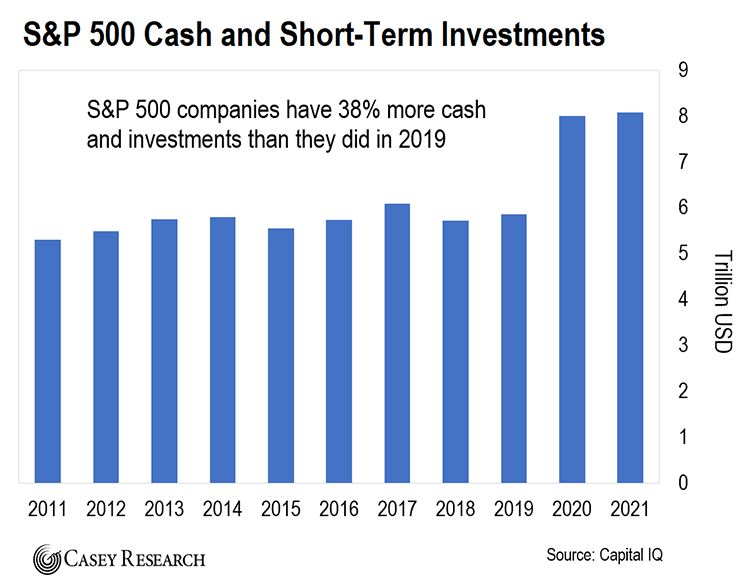 Corporations can use this liquidity to invest in new business lines, purchase other companies, and pay dividends.

The overall economy and corporations aren’t the only ones sitting on ample liquidity.

Households, too, have more financial assets on their balance sheets than ever before. 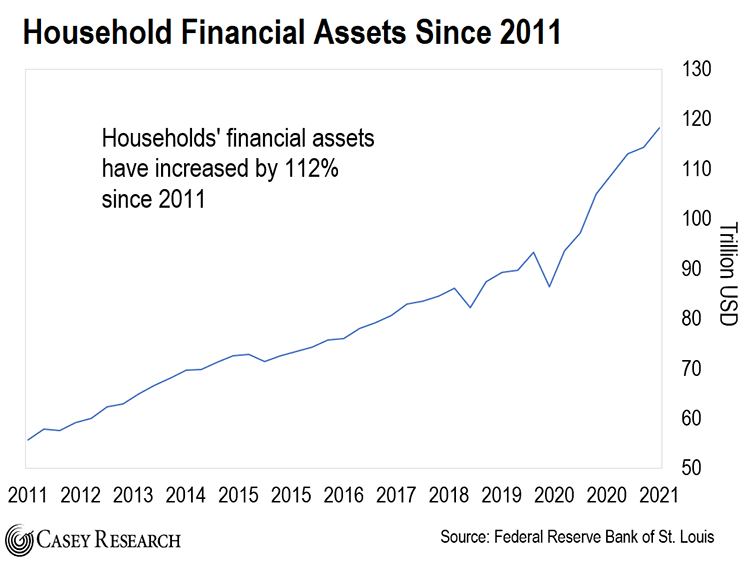 In other words, these statistics and charts suggest that one of the most important conditions for a Super Spike – liquidity – is here.

The economy, U.S. corporations, and households have more liquidity on their hands than they’ve ever had.

And this situation has been developing for a while.

For more information on how liquidity is supporting one of the biggest Super Spikes we’ve ever seen… and to play this situation to your advantage…sign up for Dave Forest’s special event – the Super Spike Summit – next Wednesday at 8 p.m. ET.

He will explain how you can create wealth during this Super Spike window… all while beating inflation and the current market downturn.

Don’t miss out on this once-in-a-lifetime opportunity.