Most people don’t know it, but Britain’s Industrial Revolution in the 1700s was funded by an unusual source.

In 1693, some of the biggest gold discoveries ever seen were made in the Brazilian jungle. The discoverers were Bandeirantes, the equivalent of American cowboys. They were Portuguese adventurers who roamed Brazil’s difficult wilderness seeking fortune.

One particular Brazilian town became the focus of this frenzy. It’s named Ouro Preto, or “black gold” in Portuguese. Today, it’s a tourist town a couple of hours outside Brazil’s modern mining center, Belo Horizonte. Back then, it had a population larger than the New York of the time.

Ouro Preto’s gold production surged, and the Portuguese government moved to take its cut. Authorities imposed a 20% duty on all gold production, called the “Fifths Tax.”

Portugal ended up with more gold than Spain got from all its South American colonies combined – vaulting the tiny country to prosperity.

But the gold didn’t stay in Portugal for long. In 1703, the country signed the Methuen Treaty with Britain. This facilitated trade between the two nations. The idea was Portugal would buy British textiles and manufactured goods, while the British would purchase Portuguese wine.

The resulting trade, however, was one-sided. Flooded with gold, Portuguese importers bought way more product than the British. The result was a massive outflow of gold from Portugal to British manufacturers.

By some estimates, a full two-thirds of Brazil’s gold windfall ended up in the U.K. Historian Nuno Palma estimates Portugal shipped out gold worth 45 million British pounds between 1700 to 1790. Adjusted for inflation, that’s $169 billion in gold.

Some historians argue this was the greatest increase ever for standards of living in the Western world.

Today’s Industrial Revolution Is Being Funded by Debt

These brand-new sectors are potentially worth trillions of dollars. They’re reshaping the entire planet – not just the developed world.

But this industrial revolution is happening in a completely different financial environment. Britain’s Industrial Revolution was built on massive amounts of hard currency. Today, the Federal Reserve and other central banks create digital dollars out of thin air.

British industrialists took big risks in developing new technology. But they had reserves of gold to back them up if things went awry. The U.K. was in a strong financial position. It could afford to push the envelope in reshaping the economy.

It’s the exact opposite today. Tech entrepreneurs are pouring hundreds of billions of dollars into new technology. At the same time, the U.S. government – and most developed nations – are essentially broke.

COVID-19, and the ensuing economic slowdown, has pushed finances to the brink. The state of Illinois, for example, had to take out an emergency $1 billion loan from the Fed in June to keep its lights on. That’s a state of 12.6 million people simply running out of money.

Cash keeps going out, and nothing’s coming in.

It’s easy to see why. Gold has crushed the wider markets during the recent corona-crash. Since February, bullion is up 22% while the S&P 500 is up 6%. Even with the market jitters of recent weeks, gold has held firm at multi-year highs. 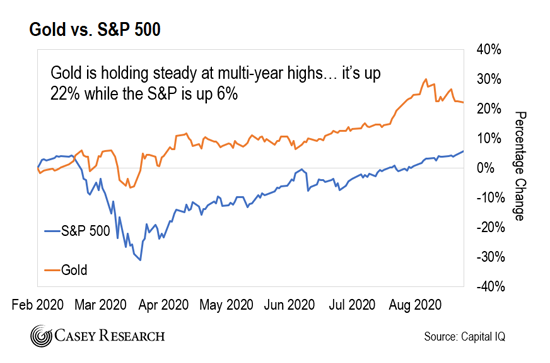 And legendary hedge fund manager John Paulson – the guy who made billions from foreseeing the housing collapse in 2008 – cut his fund’s exposure to Big Tech stocks in the first quarter of 2020.

He redeployed these funds into gold stocks.

Today, Paulson’s portfolio holds just under 10% in technology and communications investments, according to GuruFocus. But he’s got over 20% of his money in the basic materials sector, which includes gold.

(I first covered this story in Path to Profits, a special edition of Casey Daily Dispatch, which hits your inbox at 7:30 pm ET on Mondays. For breaking news like this in geotech, finance, and trading I strongly recommend keeping an eye on Path to Profits… it’s free, comes out weekly, and gives you all the biggest profit trends as they happen.)

History Shows This Is a Winning Strategy 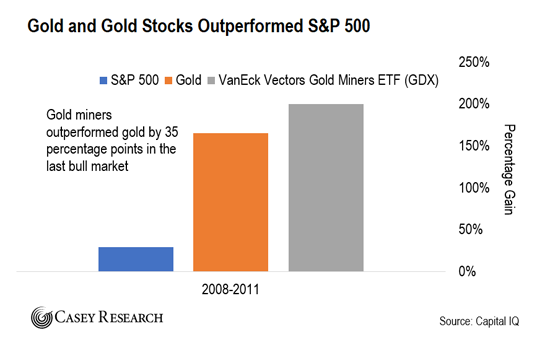 I recommend readers do the same. These stocks offer upside leverage to the price of gold. And as it continues moving higher, miners in particular stand to benefit.

But if you really want the best chance at stellar returns, investing in gold miners directly is the way to go. And I’ve traveled the world to uncover some of the best companies for readers of my Strategic Investor advisory.

To learn more about how to position yourself in some of the top mining companies (and not just in gold!), go right here.