Not one, but two of the world’s key copper nations slipped into turmoil last week.

This is a critical issue. Copper is the most important hard tech powering megatrends in technology, like the electric vehicle (EV) revolution.

Recently, we’ve seen EV makers like Tesla replace some of their hard tech. Tesla said last month it’s reducing the amount of nickel and cobalt it uses in each vehicle.

But with copper, there’s no substitute in EVs.

Copper metal is the absolute only option for wires to move electricity around a vehicle. Each EV uses about 183 pounds of copper – regardless of who makes it or what metal is in the battery.

The problem is… copper isn’t easy to find.

You Can Bet EV Makers Are Watching This

Here’s a map of the world’s top five copper-producing countries. 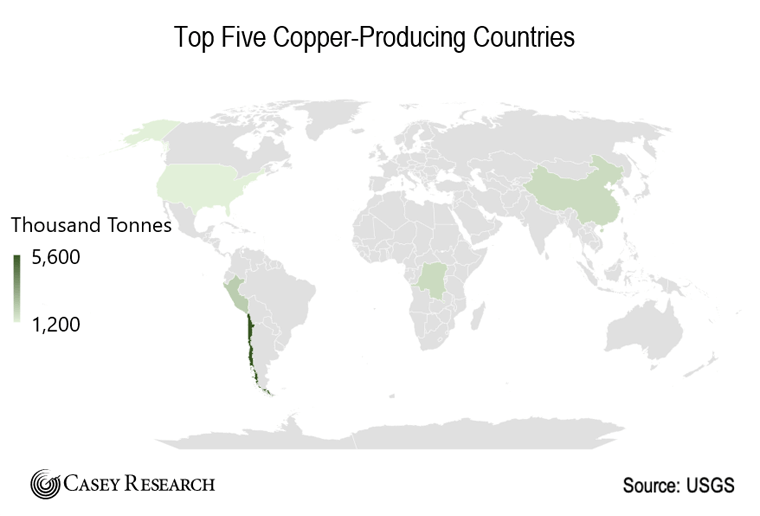 Chile is the top copper mining nation on the planet.

But an increasingly leftist government gripped the country in recent months and now wants a bigger piece of the action in copper. Lawmakers will seek state ownership in major copper projects across the country, according to reports last week.

Partial nationalization of mines would cut profits for producing companies. That could trigger declining investment and falling copper supply from this critical nation.

On top of that, Chile’s government is shutting down new projects.

Los Bronces was set to be one of the world’s premier new sources of copper. Anglo American was poised to spend billions developing the project.

Now it’s all up in the air.

It Gets Worse for This Key Hard Tech

The world’s second-largest copper mining nation is nearby Peru. The news there wasn’t more hopeful.

Peru’s massive Las Bambas copper mine is crippled. For weeks, local protestors shut down operations, occupying the mine site and blocking roads.

That’s a big deal for copper supply. Las Bambas produces 15% of all production in Peru, the world’s number two copper nation. In fact, Las Bambas is so big, it accounts for 2% of all global copper supply.

Both Chile and Peru look set to get worse before they get better.

That begs the question: where will the world get its copper?

After Chile and Peru, the next-largest suppliers are China and Africa’s Democratic Republic of Congo.

That’s a long way to go for copper if you’re a U.S.-based EV maker like Tesla. Places like China don’t even export copper. They need all the metal they can get for their own domestic EVs and other industries.

Fortunately, America does have some domestic copper supply. States like Arizona actively produce this hard tech.

But when it comes to overall supply, we’re a distant fifth place in the world. Chile produces over four times more copper than all of America’s mines put together.

Worse yet, the Biden Administration has been killing new copper mines. Regulators recently stripped key lands for a proposed copper and nickel mine in Minnesota.

They’ve also moved to block the Resolution mine in Arizona, one of the largest potential new copper suppliers in the world.

Up until now, America got by with imports from friendly nations like Chile and Peru. But that’s a dicey proposition going forward.

You can bet EV makers are watching this. I predict we could see critical moves from these players in the coming months.

An EV Blueprint for Future Profits

This may give us a blueprint for the future. With EV hard tech like copper running dry, we’ll see more mining deals from massive vehicle makers.

Tesla will be the pioneer here. The EV giant hasn’t done any copper deals yet (that we know of), but it’s only a matter of time until this metal becomes a priority.

That could be explosive for copper stocks. One lithium miner surged 264% in a single day recently on a rumor of a deal with Tesla.

I’m lining up premier copper stocks to play this boom – check out my International Speculator advisory for more information on that.

The next few months are going to be rife with crisis and opportunity. These might be some of the biggest and quickest gains we’ve seen in the unfolding commodities boom so far.