One of the world’s most important pieces of hard tech is almost gone.

No one’s talking about it. But it’s a breaking emergency.

This hard tech is something you use almost every day. There’s a decent chance you might even be holding it in your hand right now…

This past year, shortages in tech became the norm. We’ve heard a lot about troubles finding computer chips. That’s led to supply problems in everything from stereos to SUVs.

But what you’re not hearing about is the shortfall in hard tech. The world is running dangerously low on the basic goods that make almost everything we use.

For example, a large part of the chip shortage is caused by disappearing supplies of neon gas. That’s a hard tech critical to the chip manufacturing process.

Without neon, we don’t get chips. And without chips, the world will run out of nearly everything.

The new hard tech emergency I’m talking about could be even bigger. It’s happening to a building block even more essential to our lives.

Here’s why insiders in this hard tech panicked the last few months. Supplies of aluminum evaporated around the world. 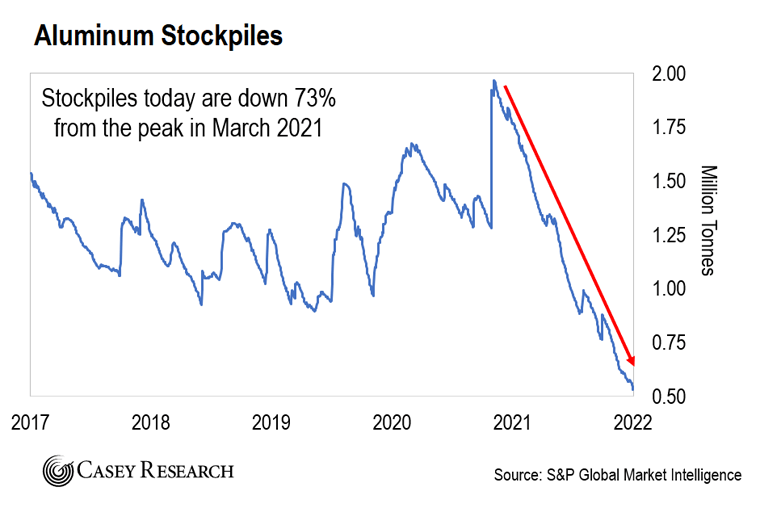 It’s true – most people think of aluminum as soda cans and foil wrapping. You might even be holding an aluminum drink can as you read this.

But aluminum is much more critical to our daily lives. It underpins some of the most advanced technologies on the planet.

Only about a quarter of global aluminum is used for consumer goods. The rest goes to some of the highest-tech sectors on the planet…

Aluminum powers our electrical grids. The lightweight metal works well (along with another hard tech, copper) to build powerlines and supporting systems.

That also means aluminum drives the electric vehicle (EV) sector. Battery packs and frames for many EVs rely on this ultra-light metal.

It gets even deeper than that.

The aerospace industry also runs on aluminum. The Wright Brothers used aluminum in their first plane design. It’s as strong as steel, but much lighter. Since then, aluminum has been a go-to for advanced aircraft designs.

Aluminum even powers our spacecraft. From SpaceX to Virgin Galactic to NASA, rocket designs rely heavily on aluminum to keep from crashing back to Earth.

That’s why tech insiders have panicked lately. As I showed above, the world’s aluminum supply all but vanished in a matter of months this year.

Last week, aluminum stockpiles on the London Metal Exchange fell nearly 5%. That caps a 43% fall in inventories so far in 2022.

That’s pushing aluminum prices into a super spike pattern. Check out the chart of recent trading. You can see how aluminum’s been itching to explode. 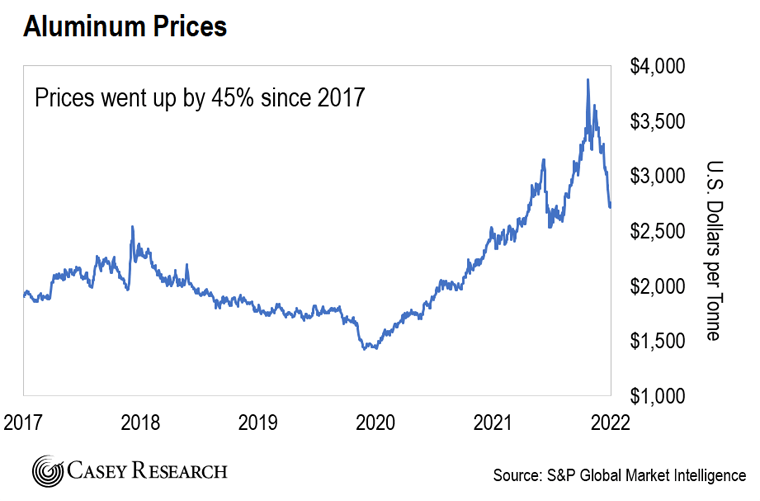 Aluminum prices eased off with the market correction the last few weeks. That buys our high-tech sectors a bit of time.

But the reprieve won’t last long.

That’s because of the current commodities Super Spike we’ve entered.

I’ve written a lot about Super Spikes lately. They’re repeating and reliable periods in history where numerous commodities spike in price, one after the other.

That’s a big part of why aluminum supply hit the skids this year.

Energy prices went nuts around the world over the last few months. U.S. natural gas prices recently surged to 14-year highs. In Europe, the situation is even more dire – we’re currently at $7.50 per mmBtu (million British thermal units) of natural gas, while Europe is paying up to $30.

This is where the Super Spike gets contagious…

Making aluminum requires a lot of energy. So much that aluminum smelters are often built in distant places like Iceland, to get cheap power from geothermal plants.

With energy sky-high, many aluminum plants can’t afford to run. Aluminum prices went up lately, but it’s not enough to cover higher energy costs at smelters.

That means one thing: aluminum prices need to rise. Aluminum will see its own spike – or we’ll simply run out of supply as more smelters shut down.

Aluminum facilities in America were running at about 50% capacity according to recent reports. That’s going to get worse as the energy crisis bites more.

When that happens, we’ll witness the next Super Spike in this unfolding cycle. This is a big opportunity for investors who position ahead of the spike.

P.S. For all the details on the best places to position yourself for this spike… and how best to do it, check out my International Speculator advisory.