Earlier this week, his company SpaceX was in the news after its Dragon capsule safely brought back two NASA astronauts from space. It’s the first time a private company successfully ferried people to and from orbit.

That’s a historic achievement. But I’m more excited about Musk’s other venture – which could have an even bigger impact here on Earth.

I’m talking about Musk’s company, Tesla, which is famous for its electric vehicles (or EVs).

EVs are here to stay. They’re growing more popular every year. In fact, Casey Research expert David Forest predicts that in about 15 years, over half of all vehicles sold globally will be electric.

Of course, Tesla is emerging as one of the world’s leaders in EVs. In the United States, its EV market share is a staggering 60%.

But if Tesla wants to stay on top of this emerging trend, it has to solve a huge problem. And that spells opportunity for investors…

Tesla is hungry for lithium.

The reason is simple: Lithium is a key material in EV batteries. A Tesla Model S contains about 140 pounds of the metal.

Last quarter, Tesla sold 10,600 units of its Model S and Model X. That means it used over 600 tonnes of lithium.

Plus, the next generation of batteries to be used in electric cars will also rely on lithium. So Tesla needs a reliable source of the metal to continue to produce EVs.

But there’s a big obstacle lurking down the road… and it doesn’t just affect Tesla.

The global EV industry – including American EV makers like Tesla and Ford, or European ones like Volkswagen and BMW – relies on China for both mining and processing lithium. The country produces almost two-thirds of the world’s lithium-ion batteries, and controls most of the processing facilities for lithium.

And as COVID-19 showed, it’s dangerous to have your supply chain stretched across the world. It could instantly shut down if transportation and travel stop.

The answer, of course, is to take advantage of lithium supplies on your home soil.

Europe woke up to this solution earlier than the U.S. It has started investing in lithium processing infrastructure. In 2019, and so far in 2020, it overtook Asia as the world’s top investor in the local lithium supply chain.

And Europe (excluding the United Kingdom) improved its mining legislation, too. Now it’s the world’s most attractive mining region, according to the Fraser Institute’s Investment Attractiveness Index. (The index measures how easy it is for a mining company to work in a country, and how rich in resources the country is.)

The United Kingdom is also catching up. It plans to build its own battery factories.

Meanwhile, the U.S. lags behind. But its lithium industry has one of the world’s best setups for growth – and for investment opportunities…

The U.S. Is Poised to Become a Lithium Superpower

The United States has plenty of lithium. In fact, its lithium reserves and resources are seven times larger than China’s. 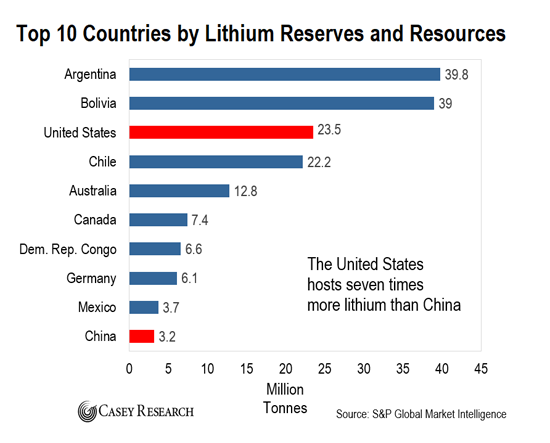 In other words, the United States has so much lithium that it doesn’t have to rely on far-off places like the Democratic Republic of Congo or China for the metal. It’s simply lacking the infrastructure to use its resources.

Take it from our resident mining expert, Dave Forest. Remember, Dave’s a geologist by trade who travels the world scouting for the next great investing opportunity in resources.

And according to him, because “geotech” metals like lithium are critical in emerging technologies like EVs, the U.S. is about to jumpstart its mining industry to take advantage of these metals on American soil.

The great thing, from a U.S. standpoint, is we used to mine a wide range of geotech metals. Over the last 20 or 30 years, the domestic mining industry has largely decayed. But in-ground supplies of these critical minerals are there. So we can switch it back on again. And that’s what’s about to happen.

I wouldn’t be surprised to see the U.S. overtake China in production, processing, and battery output. 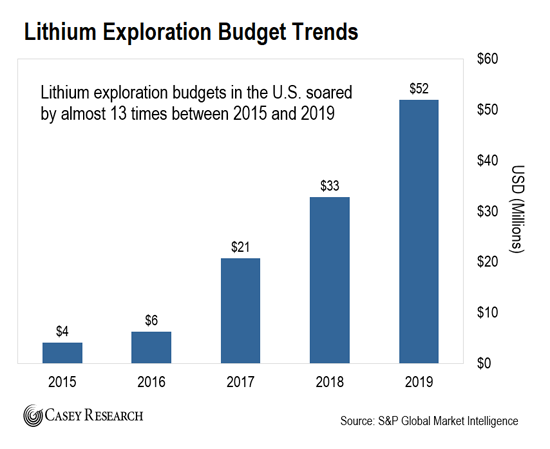 With all these forces in play, it’s only a matter of time before the United States will be a global lithium superpower.

That’s why I recommend you take a look at the Global X Lithium & Battery Tech ETF (LIT). It’s a relatively low-risk way to get exposure to the global lithium supply chain, with a mix of exposure to American, Chinese, and other foreign lithium companies. Just be sure to only bet as much as you can afford to lose.

But if you’re looking to be more aggressive, Dave‘s identified some of the top lithium companies to benefit from this rise. One of his picks is up over 60% in under two months.

As I’ve just shown you, companies are ramping up their exploration budgets. Which means that there will be more positive news coming in the months and years ahead.

And it takes just one successful press release to send an exploration company’s shares soaring.

Recently, Dave’s homed in on one tiny lithium company on the verge of a multibillion-dollar deal with EV giant Tesla. It’s an incredible opportunity with a chance at stellar returns – but only if you get in early. The news could come out any day now.

Go here for all the details if you don’t want to miss out on life-changing gains as the lithium trend takes off.