Justin’s note: Today, Casey Report editor Nick Giambruno writes about a troubling sign of what lies ahead for the US. It may seem small, but Nick says it will lead to a much larger epidemic… and there’s an easy way to start protecting yourself today…

This was the rallying cry of what eventually became the largest fast-food strike in US history.

It all started in late 2012, when over 100 New York City fast-food workers walked off their jobs, demanding higher wages.

Many made minimum wage. They were struggling to make ends meet as rent, utilities, medical care, and the overall cost of living continued to rise much faster than their wages.

The “Fight for $15” movement quickly spread across the country.

I think it’s a troubling sign of what lies ahead for US politics. And it has serious investment implications.

The economic stupidity of minimum wage laws should be easy to grasp. But, as American journalist H.L. Mencken once noted, “Nobody ever went broke underestimating the intelligence of the American public.”

And in a free market, the price of labor would be the wage on which they voluntarily agree. The price of labor is governed by the laws of supply and demand, just like any scarce factor of production.

But the US labor market is not a free market. Minimum wage laws are the chief reason why.

These laws are really a form of price control—in this case, on the price of labor. And price controls always create destructive distortions in the market. Here, that means unnecessary unemployment and artificially high prices passed on to consumers.

Even the Congressional Budget Office admits that 500,000 jobs would be lost if the US government raised the federal minimum wage from $7.25 to $10.10.

How many hundreds of thousands of jobs (or more) will be lost when the Fight for $15 movement eventually succeeds is anyone’s guess. 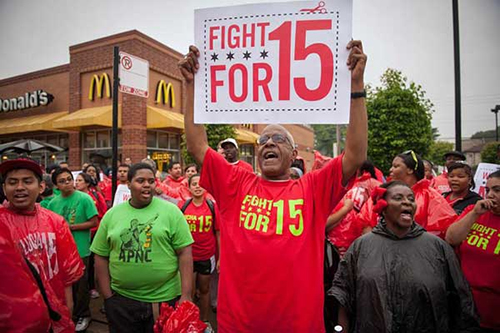 Minimum wage laws are no different than government-mandated prices on other input costs.

Take aluminum cans, for example. Suppose the government sets the price of an aluminum can at $5… far above its market price.

Coca-Cola would have to pass along that artificially high cost to its consumers to stay in business. But how many people would spend over $5 for a can of Coke?

Few people would buy something so artificially expensive. That’s particularly true when there’s a ready alternative—like glass or plastic bottles—which Coca-Cola could sell at market prices.

The end result would be a glut of $5 Coke cans sitting on store shelves. Nobody would buy them.

In this scenario, the problem isn’t that people don’t want Coke. They do.

The plain truth is, not every job generates $15 an hour worth of output. And some workers would much rather accept jobs that pay less than $15 than have no job at all.

But federal, state, and local governments prohibit this voluntary arrangement to varying degrees with minimum wage laws. (The federal minimum wage is $7.25 per hour. At $12.50 an hour, Washington, DC currently has the country’s highest minimum wage.)

So employers don’t hire them. They’re no more likely to overpay for labor than you are to pay $5 for a Coke. And workers remain needlessly unemployed.

This is how minimum wage laws hurt the low-skilled people they’re supposedly designed to help.

It also leaves companies with no choice but to raise prices, hire fewer people for fewer hours of work, or find alternatives. Increasingly, that means turning to machine automation.

Take McDonald’s, for example. The company is implementing mobile ordering and digital kiosks to automate the ordering process. It’s on pace to replace human cashiers in 5,500 restaurants in the coming years, according to a recent study. 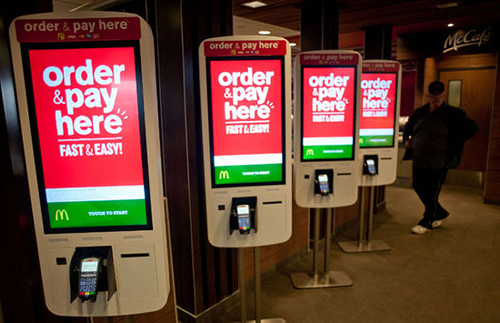 Meanwhile, Shake Shack recently announced its first “cashless shack” in New York. It will be the company’s first restaurant to exclusively use self-ordering kiosks.

The shift towards automation in the fast food industry is a direct response to the Fight for $15 movement. As the government forces companies to pay an increasingly higher price for labor, more will look to machines to stay competitive.

Perverse as it may be, this is the inevitable result of the higher minimum wage laws that Fight for $15 is pushing for. Yet, the movement is growing…

The Service Employees International Union (SEIU), which represents nearly two million workers in the United States and Canada, now supports it. Rising socialist Bernie Sanders and an increasing number of other politicians are also on board.

I think Fight for $15 is only one symptom of a much larger epidemic. It points to an increasingly radical political environment that will have serious financial consequences.

By next year, millennials are expected to surpass baby boomers as the nation’s largest living adult generation. This is one of the reasons Bernie Sanders and other socialists are growing in popularity.

The Chair of the Democratic Party recently declared a young, millennial socialist who won a New York City primary “the future of our party.”

There’s No Such Thing as Free Money

Bernie and his fellow socialists are not offering anything new. It’s just a heavier dose of the same bad medicine economic witch doctors have been prescribing for years.

One of their latest gimmicks, however, is beyond absurd. And the scariest part is that it’s gaining ground.

This dangerous gimmick is something called a “universal basic income”—or UBI, for short.

It’s where the government gives you money, just because. There’s no requirement to work or even display a willingness to work. You could sit at home all day, watch TV, and still get a check from the government.

Remember, even people living under communist regimes have to work. But with a universal basic income, the government simply hands out “free” money to everyone for doing absolutely nothing.

Let that sink in for a minute.

I think a universal basic income will become a pressing political issue in the near future. It’s becoming more popular in so-called academia. The political elite and Silicon Valley bigwigs are also embracing it.

Bernie Sanders and a number of prominent Democrats support a UBI. So does Facebook founder Mark Zuckerberg.

I expect more and more misguided Americans to accept a UBI as status-quo politicians, economists, and media talking heads support it… and as inflation pushes up the cost of living and more people feel the pinch.

The idea will be politically popular. Who would protest free money?

If the US adopts a UBI, it would be next to impossible to get rid of. Who would vote for a politician that stops the gravy train… or even one that slows it down?

The problem is… nothing in life is free. Expect more money-printing to pay for these policies. That, in turn, will create more inflation.

I think anyone who’s serious about protecting their wealth in this dangerous environment should own some physical gold.

P.S. In addition to physical gold, you’ll also want to find ways to boost your upside. For that, I suggest looking to companies that produce precious metals. I just recommended a world-class miner in my latest issue of The Casey Report. Subscribers can access it here.

If you’re not a subscriber, you can access this low-risk, high-reward play by signing up for The Casey Report today. And just for subscribing, we’ll send you a copy of Doug Casey’s latest book. Learn more here.

Today, a reader tells us his experience investing in cryptos…

Good day. I have been purchasing cryptos since April 2017, five or ten thousand at a time. By January 2018, I was up 400%. Oh how I wish that I had sold out then. I’m a follower of Palm Beach Confidential editor Teeka Tiwari and I trust his judgement. So I held on and even added to my positions as prices fell. Unfortunately, as of this past June, my account officially went in the RED by approximately 25%. Right now, on July 18, 2018 my account has recovered a little and is sitting at 90% of my initial investment.

I don’t really understand how all of this institutional money and investment has been entering the market since May and yet cryptos kept falling; but I really believe in blockchain and cryptos being the future and I just hope and pray that all of this money starts to make a difference sooner rather than later. I’m 60 years old and looking to retire within one to two years with greatly enhanced benefits thanks to cryptos and of course, Teeka. Have a great and prosperous day.

Teeka says the bear market in cryptos is over. And this could be your last chance to get in before bitcoin goes to $65,000. Learn more by watching his brand-new video presentation here.

To join us for our first-ever Legacy Investment Summit during October 17–19, 2018 in Bermuda.

This is our largest conference ever—and the speaker list will blow you away. If that’s not enough, the location is a true vacation destination with every amenity at your fingertips. Click here for details…