Kris’ note: Technology is one of the key foundation stones of Casey Research. You can see that as far back as the 1980s and 1990s, when our founder Doug Casey predicted the rise of cellular phones and interactive media.

So whenever we come across any ideas or opportunities in tech, it immediately grabs our attention. That’s the case with today’s guest essay from Casey Research friend Jeff Brown. Jeff has been knee-deep in tech for 30 years. He’s a venture capitalist, angel investor, and was a high-ranking executive at a leading Silicon Valley tech company.

Today, Jeff uses his contacts and knowledge to find the most exciting and investable tech stories. Right now, Jeff has pinpointed one key sector that he says is primed for enormous growth… and a specific opportunity that’s standing in the path of a $2.9 billion windfall. For the full story, read on…

That’s a big wish list. So the question was… how would we pay for it all?

About $205 billion comes from unspent COVID relief aid… but lawmakers determined another $28 billion would be “dug up” by increasing tax enforcement for cryptocurrencies.

On its face, that sounds okay. But the devil is in the details…

The bill stated that all crypto “brokers” would have to hand over customer information to the Internal Revenue Service (IRS).

And the administration defined “broker” as anyone or anything that “effectuates transfers of digital assets.” This could include crypto miners, validators, smart contracts, software developers, and more.

And a smart contract isn’t even a person or an entity. It’s a piece of software code running on a blockchain network. A software developer who designs a digital asset wallet is not a broker and should not be responsible for collecting and reporting user information.

But while this might sound like it’s the beginning of the end for blockchain… it’s not time to throw in the towel. In fact, I’m more bullish than I’ve ever been before on the blockchain industry and digital assets.

Crypto Is Bruised, Not Beaten

While some of these developments with legislation are disappointing, the fight isn’t over.

Blockchain technology and its development, by definition, is decentralized. It is a global phenomenon, and it can’t be stopped. It will thrive despite the infrastructure bill, and we’ll still be able to invest in this incredible asset class.

Blockchain industry advocates will also continue to push for better regulations and implementation here in the U.S. I’ve experienced this firsthand through my own work with the Chamber of Digital Commerce. 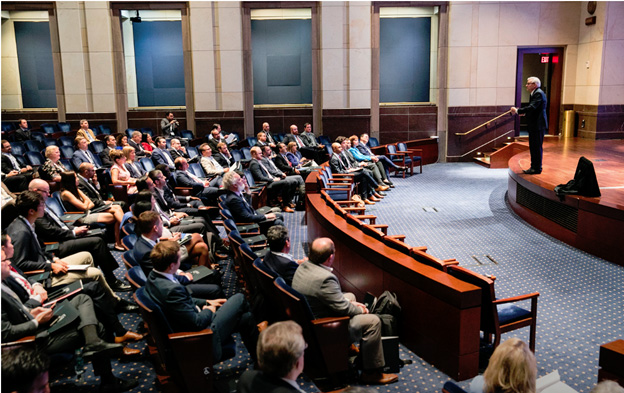 Over the course of the day, I showed various members of Congress and the Senate just how blockchain technology can be used to solve real-world problems… and drive efficiencies through outdated legacy processes.

For example, digital wallets could verify identity and eliminate fraud by putting our identities on the blockchain. Everybody knows identity theft is a huge problem right now. Blockchain can solve it instantly.

In fact, we could register not only our IDs on the blockchain… but also our driver’s licenses… passports… voter registration… and hunting and fishing licenses. They all could be attached to a digital ID on the blockchain. It’s silly we are still issuing pieces of paper for these things.

What’s more, we could link registration for various government services to the digital ID. Think Social Security… Medicare… or Medicaid.

In this way, we could eliminate all the fraud and corruption.

And this technology will also impact the ways we do business and transact together. Consider smart contracts. These are digital contracts that automatically execute whenever certain conditions are met.

Smart contracts could simplify the process of buying a home. It takes months to close and costs thousands of dollars in fees.

Smart contracts can automate these processes and get rid of the third parties. That would speed up the process and drive down fees.

Imagine purchasing a home in 24 hours… and paying at least 80% less in transaction fees.

And on a larger scale, blockchain can also aid supply chain management for businesses. In the pharmaceutical industry, for example, blockchain would enable us to track drugs from manufacturing… to containerization… to the distribution center… to the pharmacy… and ultimately to the patient with a doctor’s prescription.

This kind of tracking from the point of manufacture to a patient can ensure that the supply chain is secure. And pharmaceutical companies can easily demonstrate compliance with a regulated substance like opioid-based painkillers.

And these are just a few of the ways blockchain technology will change the world around us… which means, as investors, our opportunity is nearly limitless.

How We’ll Profit From Blockchain

Blockchain technology will one day touch every area of our lives. This is such a massive trend that this infrastructure bill won’t be anything but a speed bump. Ultimately, no government bill will be able to do more than slow this technology down temporarily.

And the good news for us as investors is… it’s still early.

Blockchain infrastructure is still being built out. Many exciting projects are experimenting with the new capabilities blockchain tech provides.

That means we still have time to invest with the chance to create generational wealth.

And while I’ve spent years working with the blockchain community – both as a member of the Chamber of Digital Commerce and as a private investor – I haven’t often recommended cryptocurrencies or projects in my research services.

That changes now. It’s finally the right time to begin investing in this space. And to prepare readers for this shift, I’m planning to share about a critical blockchain upgrade happening right around the corner… one that will involve a massive giveaway. In fact, as much as $2.9 billion could flow into the hands of the early backers of this project.

I’m pulling back the curtain on this opportunity… as well as our strategy in the crypto and blockchain space going forward… on August 25 at 8 p.m. ET at my Click for Crypto event.

Whether you’re a seasoned crypto investor… or someone interested in dipping their toes into the space for the first time… then I encourage you to sign up to attend for free.