Justin’s note: Today, we turn to tech expert Jeff Brown again for more insight into what he’s calling the biggest investment opportunity of the next decade.

As we’ve told you, Jeff has decades of experience in the technology industry… And thanks to his direct connection to Silicon Valley’s inner circle, he often has the inside track on big tech news – before it hits the mainstream media.

Below, he shares more details on the groundbreaking trend that will “open the doors to an entire suite of technology that would have been impossible only a few years ago.” Here’s why it needs to be on your radar today…

Please take a look at the image below: 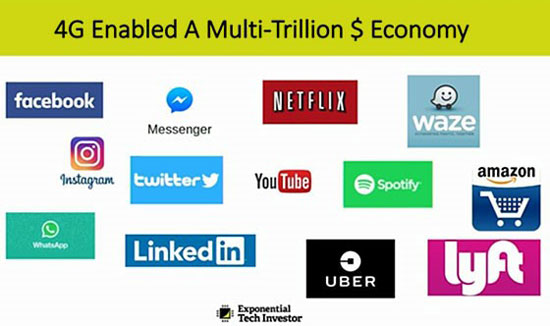 I’d be willing to bet that anyone using a computer and a smartphone is using at least one of the services pictured – probably several of them. Each of those businesses is worth billions of dollars. Some are worth hundreds of billions.

They’re used on a daily basis and have become so ubiquitous that we often forget what has made these businesses possible: fourth-generation (4G) wireless network technology.

This technology was developed by high-tech companies and deployed around the world by wireless network operators.

These networks are arguably the most critical “utility” we have today. They connect our wireless smartphones, tablets, and so many other devices. And they’re now as important as electricity to our homes.

When 4G wireless networks first rolled out around 2010, they brought a major improvement in the amount of data that could be sent or received. The newfound bandwidth from these networks led to an explosion of services that made our lives far more convenient than ever before…

On-demand taxi services popped up (Uber and Lyft). Social media was available at the touch of a button on your smartphone (Facebook, LinkedIn, Twitter, and Instagram). Even shopping was possible during a quick, five-minute break (Amazon).

Businesses quickly turned to a “mobile-first” strategy. For instance, 75% of Facebook’s traffic and revenue comes from mobile phones. Half of all Spotify users – the popular music streaming service – are “mobile only.” And 25% of all Amazon Prime orders originate from its mobile app.

Without a high-speed wireless connection with plenty of bandwidth, some of the biggest companies in the world either wouldn’t exist or would be just a fraction of the size they are today.

All told, the buildout of 4G wireless networks unlocked trillions of dollars of wealth. It gave rise to entire new industries. And of course, it made some early investors very rich.

Today, it’s about to happen all over again…

Regular readers know that I’ve been following the rollout of 5G wireless networks closely. While current 4G networks are fast enough to give us many products and services we use today, they’ve been a bit of a disappointment, too.

It may surprise you to learn that the United States is in 43rd place when it comes to global mobile download speeds. And the 4G networks we use every day are already congested from the huge volume of data we send and receive. Yet our consumer demand for more bandwidth is seemingly endless.

But with 5G wireless technology, that will all change. Download speeds will be, on average, 100 times faster than current speeds. The migration from 4G to 5G technology will be revolutionary.

There will be an explosion of services leveraging these superfast networks that were once thought of as purely science fiction. And the companies behind these 5G-powered services will become the next Uber or Netflix.

Today, these cars can mostly drive themselves. But for a small percentage of the time, human intervention is required. Human operators take remote control when vehicles encounter tricky situations, such as entering or exiting busy freeways or reversing into loading docks.

This kind of remote control isn’t possible on our current 4G networks. The “latency” – or delay – from command to response is, on average, 100 milliseconds (0.1 seconds).

That may not seem like much. But when it comes to something as serious as remote control of moving vehicles, the connection has to be nearly instantaneous.

Starsky Robotics is already doing this in Florida. The company is currently testing a fleet of self-driving semi-trucks. These trucks are able to drive themselves on a familiar setting, such as freeways. But human operators, who are real truck drivers, are able to remotely take over to back the trucks into loading docks or help them exit freeways. 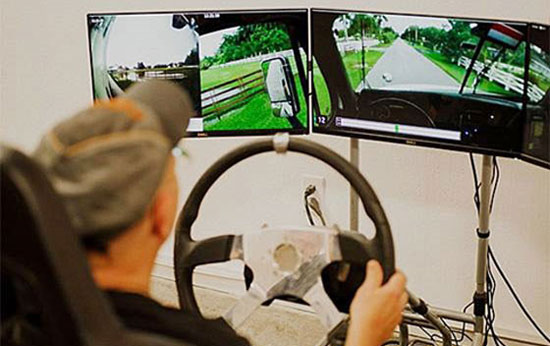 And there’s something else…

According to a 2017 Gallup poll, 43% of Americans reported that they did some or all of their work remotely.

Even with more and more Americans working remotely, it’s still not realistic for many to give up going into the office. Video conferencing is a great tool, but it doesn’t replace the productivity of being in the same room with colleagues, customers, or business partners.

But by using lasers to create realistic, 3D versions of people or objects, holographic projection technology can make it appear as if they’re right in front of you. Professionals would be able to work entirely from home (or while traveling) and “holo-commute” for important meetings or discussions.

While it might seem like just a staple of sci-fi films over the years, this technology is already available today. In the high-tech industry, it’s called “volumetric telepresence” or “holographic telepresence.”

One of the companies in this space is LA-based 8i Studios. The company uses a controlled environment to record images of people or objects, then projects those images as holograms in a different location.

Holographic technology is available and in use today

As you might expect, this sort of technology requires a lot of data and bandwidth. And as I’ve said in the past, current 4G wireless networks are already completely overloaded.

But with 5G wireless speeds, holographic telepresence will become possible on a wide scale. And because the technology is wireless, it will take just seconds to “pop up” as a holographic image.

There will likely come a day when you can work from the comfort of your own home and simply “teleport” via hologram to the office to chat with colleagues or sit in on meetings.

No more long commutes… No more getting caught in rush-hour traffic… And no more cubicles.

What Comes Next After the Smartphone?

The iPhone or Android smartphone in your pocket will soon become obsolete as well.

The technology that will replace it is AR, or “augmented reality.”

With an AR headset, graphics, images, or data are overlaid on top of the world you normally see… You’re able to view the real world. But it’s augmented, or mixed, with these other visuals.

One of my favorite companies in this space is Florida-based Magic Leap. In August, Magic Leap released its first AR headset, the Magic Leap One. 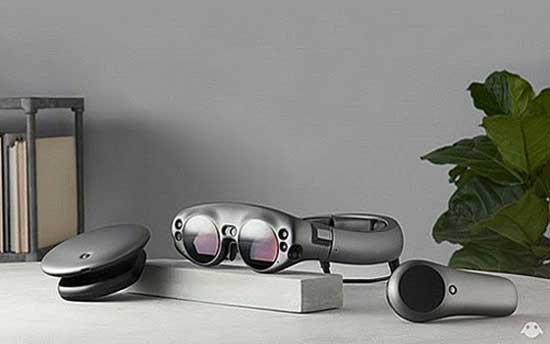 The Magic Leap One AR headset

It’s still an early prototype. None of us would be caught dead wearing something like that when walking down the street.

But in the next 12 to 18 months, we’ll see AR lenses that look more and more like normal pairs of glasses. Even Apple CEO Tim Cook recently said that AR would soon be as commonplace as eating three meals a day.

Imagine sitting in a café and putting on a pair of AR glasses. Without looking at or touching your smartphone, you can read all your emails, receive and send messages, check the most recent stock prices, and even scroll through the pages of The Wall Street Journal. All the information will appear as if it were floating just a few feet in front of your face.

Once that sort of technology becomes widespread, what use would you have for a smartphone?

AR will make it possible to do everything you can do on a smartphone – text, call, check emails, browse the web, etc. – by using voice commands, hand gestures, and eye movements while wearing an intuitive pair of AR glasses.

And just last month, AT&T announced that an early rollout of its 5G network will be launched at Magic Leap’s headquarters in South Florida. This tells me that Magic Leap will be incorporating 5G with its wearable AR devices.

This is what I mean when I say that 5G will be revolutionary. It won’t just improve our current technology. It will open the doors to an entire suite of technology that would have been impossible only a few years ago.

If you’re an investor, this needs to be on your radar. The time to position yourself isn’t in the future… or even in the next month or year.

P.S. If you believe in the investment potential around 5G technology, then you owe it to yourself to learn about the investment options available to you – which is why I put together a special presentation to discuss them.

During the presentation, I’ll tell you about a once-in-a-decade tech event that could create a whole new group of millionaires – starting November 14.

Even if you never invest in 5G, you ought to know about this event. Get the details here…

Today, readers weigh in on our latest interview with Doug Casey on political bombings…

I liked it a lot. Doug’s insight is very like our home’s. Short of divine intervention, which would be wonderful, he has laid out a very likely scenario ahead, at the very least, in the longer term past 2020. But it could certainly start sooner, as in 2019 or 2020.

I was very disappointed with the point of view expressed. I felt as if I were reading something from Fox News – totally biased!

Doug Casey clearly hates everything liberal. He insults our college students’ intelligence by stating they are all brainwashed by their leftist high school teachers and can’t make up their own mind.

I came from Germany in 1982 to live and work in the USA. My background is social democratic and I experienced all the benefits a social democratic system offers, i.e. health insurance, a pension system you can live on once you retire, free higher education, and a tax system that’s fair.

The US is divided politically and socially because of the enormous discrepancy in income. In a country where 1% of the population holds 90% of the wealth, where politicians can be bought, where the taxes for the super-rich are less than taxes for the average worker, where there is a lousy public transportation system, and where the government’s biggest budget is the military… No wonder the country is divided. But having a common enemy and starting a serious war will not unite this country as Doug predicts. It will make Casey, and a bunch of investors who invest in the “Defense Industry” richer, kill more of our troops, and destroy another country as we have seen in the recent past. I’m sure you will not publish this feedback. If you do, it would go against Casey’s principles.

I appreciate Casey’s perspective and analysis. The rarity of common sense makes it more precious.