The solution, we’re told, is to get out of cash and into bitcoin.

Or what about gold, artwork, real estate…

The Times of India reported that two scrap dealers hid 15 pounds of uranium (under the bed, perhaps) for 10 years. It had a “street value” of $2.8 million.

Indian police have arrested both men.

Too bad for them. The uranium bear market ended three years ago. The price is on the up again.

But owning physical uranium seems a foolhardy way to make a buck.

There must be a better way to profit.

If this is your first time reading this newsletter, welcome. If you’ve been here before, welcome back. As always, we want to make sure that when you’ve finished reading the Dispatch, you’ve gotten something that’s actionable, useful, or informational.

We do this by showcasing the ideas from our in-house investing experts: Dave Forest, Nick Giambruno, and the founder of our business, Doug Casey.

Our two goals in the Dispatch are:

We hope to achieve that today, and every day.

You Don’t Trade This Market

If you recall yesterday’s Dispatch, we mentioned uranium stocks have performed well this year.

In fact, as a group, they have beaten oil stocks and “clean” energy stocks. They’ve beaten the latter by five-to-one since last year’s election.

But getting the timing right isn’t easy. It can sometimes feel like uranium is in a never-ending bear market… punctuated by relatively short periods of stunning gains…

Followed by more years of woe.

Folks who are willing to wait years for a pay-off.

But when the pay-off comes, it’s hugely rewarding.

Check out this chart. It’s of a uranium stock from late 2007 to late 2011 (we won’t name it because it’s an open position in our premium Crisis Investing research service): 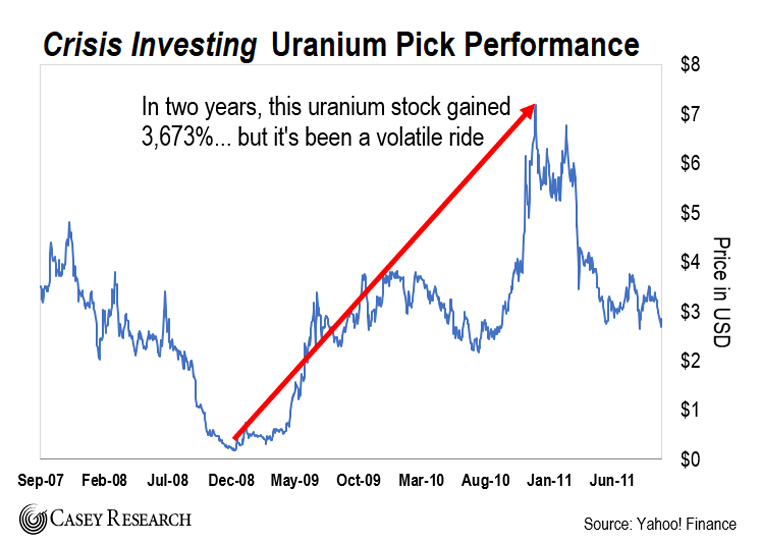 It’s typical of the wild ride a uranium stock investor goes through. After falling by 96% from late 2007 to late 2008, the stock went on to gain 3,673% in just two years… with plenty of ups and downs along the way.

After that, it fell more than 62% over the following nine months. We suppose you could say the chart is crypto-like in its appearance.

But one question you may have is: “Are uranium stocks heading toward another 96% fall… or another quadruple-digit gain?”

We can introduce you to a man with the answer…

This Is Simply Supply and Demand

Right now, I can’t think of a commodity with more upside and less downside than uranium.

While uranium stocks have started to take off recently, we’re still much closer to the bottom than the top. Sentiment toward uranium is still at or near the moment of maximum pessimism.

The reason for Nick’s conviction? He explained that it’s a simple supply and demand story… lots of demand and (currently) not much supply.

On the demand side, nuclear power (which is fueled by uranium) generates around 11% of the world’s energy.

The country with the highest energy consumption is China… however, it currently only generates 5% of its electricity from nuclear power. Coal accounts for 66%.

But in the last few years, China has tried to combat its high pollution rate by backing off of fossil fuels. That means nuclear energy will take a bigger share of electricity generation along with “clean” energy, such as solar and wind.

In fact, according to the BP Statistical Review of World Energy, China’s nuclear energy use will more than triple from 257 terawatt hours in 2017 to 915 terawatt hours by 2050.

Furthering demand for uranium, Japan is still in the process of restarting its nuclear power industry. That’s after shutting it down following the earthquake and tsunami in 2011.

As for supply? According to nuclear industry market research firm UxC, last year, global uranium production fell to its lowest level since 2008.

That means nuclear power stations have to dip into inventories, which is fine for now. But how much longer before inventories reach critically low levels?

Even before COVID-19, uranium inventories were down. According to the Energy Information Administration (EIA), at the end of 2019, stockpiles were down 26% from 2018.

(The EIA’s report on 2020 inventories is due out this month – we’ll watch out for that.)

In fact, pre-COVID, some uranium miners even shut down part of their production to combat low uranium prices… The cost of mining uranium wasn’t enough to justify pulling it out of the ground.

They would lose money selling it.

So several companies opted to idle their plants… leave the uranium in the ground… and wait until stockpiles got low enough – and demand high enough – for prices to rise.

And that’s certainly happened, but we believe the main crunch is still ahead…

A Bull Market of Historic Scale

Bottom line: In Nick Giambruno’s view, the supply-and-demand setup can only go one of two ways.

As he recently told his Crisis Investing subscribers, either…

This means one thing. While timing is never easy with uranium stocks, the trend is clear. As we showed you yesterday, the Global X Uranium ETF (URA) has moved higher. But looking at the 11-year chart below, you can see the recent rise is barely a fraction of where it has been in the past… 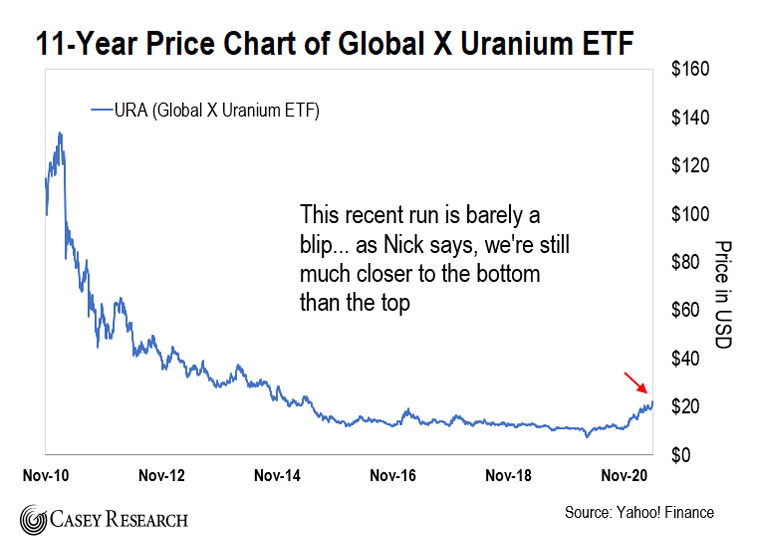 He also tells us that while ETF exposure will give investors a nice return during this bull market, it won’t be anywhere near the gains investors will get from owning the best uranium stocks on the market.