Life-changing opportunities often come from the smallest markets or the tiniest stocks.

These opportunities are perfectly suited for the average investor, because they’re cheap enough to put your money in… are often overlooked by Wall Street… and are so small that it could take just a little good news to send them soaring.

Take commodities, our bread and butter here at Casey Research. Most investors focus only on gold or silver, which are important investments in times of decades-high inflation.

But there’s another set of metals that’s almost completely overlooked. In 2021, the global market for this kind of commodity was worth just over $5 billion.

For comparison, the global market for gold that same year was worth about $190 billion, almost 38 times higher.

But the small size of this overlooked metals market is exactly why I think it’s so exciting… because that means huge upside. 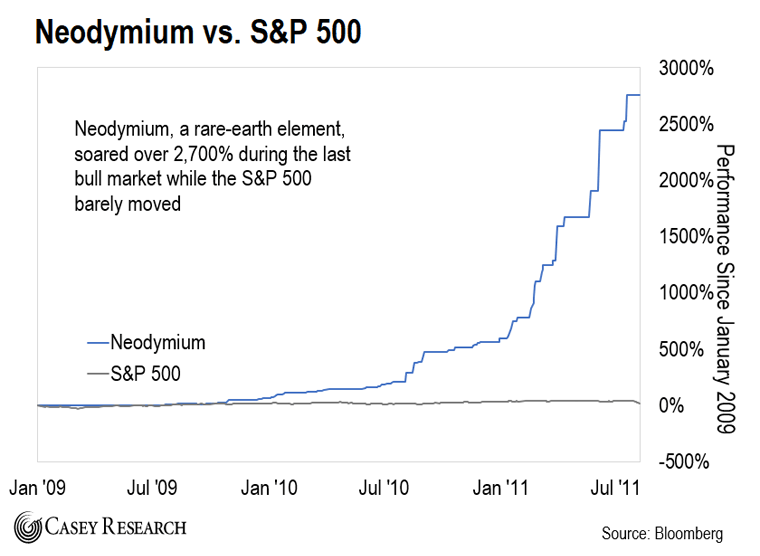 And today, we are seeing similar “Super Spike” opportunities in this overlooked market. As a reminder, Super Spikes are periods in history when hard asset prices surge violently. They make investors who position themselves early rich.

Rare earths are metals that have unique and valuable properties, like magnetism. They’re used in cutting-edge technologies that power everything from your smartphone to military aircraft.

In fact, rare earths are most often used in the manufacturing of military technology. For example, an F-35 fighter jet contains about 920 pounds of rare earths. A Virginia-class submarine contains more than 9,000 pounds of these elements.

So rare earths are critical because of their high-performance uses – and for our national security. But this market is still relatively obscure.

And this sector is almost entirely dominated by China-based producers. The country supplies 80% of the U.S.’s rare earths. Overall, China controls almost two-thirds of the total rare earth market.

Take it from Dave Forest, editor of The Super Spike Advisory, and our go-to commodities expert at Casey Research:

America, on the other hand, let its rare earths infrastructure decay.

According to Dave, China’s stranglehold on rare earths supply, along with inflation, are what triggered the last bull market in 2010, when the metals soared as much as 1,000% or higher. Dave again:

At the time, China – the world’s top producer of rare earths – threatened to cut off supply after a territorial dispute with Japan. These dual catalysts of inflation and geopolitics sent rare earths skyrocketing.

Meanwhile, China’s rare earths dominance is threatening U.S. officials. They don’t want to rely on China for crucial materials needed to arm and supply our military. So they’ve decided to take action.

It’s Time for Rare Earths to Be “Made in America”

As part of their push for rare earths independence, politicians have started suggesting for more rare earth elements to be sourced from within the U.S. or its allies, like Canada.

Then, on May 28, 2021, Representative Michael Waltz introduced a bill aimed at reducing America’s dependence on China for these critical elements.

The legislative push for rare earths independence is gathering momentum…

…But laws are one thing. Capital commitment is a much stronger vote of support.

Earlier in June, the U.S. Defense Department said that in the fiscal year 2021, it would seek a total of $2 billion for rare earths mineral purchases.

That’s about 40% of the total rare earths market.

The Army isn’t releasing too many details about this funding, so nobody knows exactly how the $2 billion will be spent. If the government invests the money into U.S.-based and allied producers in the rare earths supply chain, the rare earths market outside of China will explode.

But just this Tuesday, we got a first glimpse into this massive capital investment.

The Pentagon has signed a $120 million contract with Lynas Rare Earth, which will build the first U.S.-based, domestic heavy, rare-earth separation plant in Texas.

Lynas is based in Australia, which is a military ally and a much friendlier trading partner than China.

With the Army’s new push for domestic supply, some analysts predict China will lose as much as one-third of its market share by the mid-2020s.

And the market has already reacted to these announcements…

Over the past 12 months, rare earths outperformed the market by 18 percentage points. 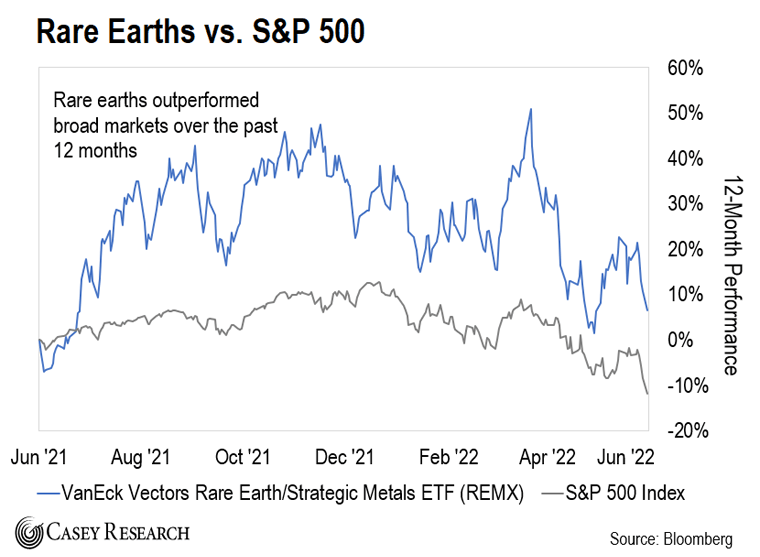 This is the perfect time to get exposure to this trend. Because this market is still small, I believe there’s plenty of upside left.

If you want to get some exposure to the coming surge in rare earth elements, look at the VanEck Vectors Rare Earth/Strategic Metals ETF (REMX). This is an exchange-traded fund that holds a basket of companies involved in rare earths.

However, it holds quite a few China-based companies. So even though higher rare earth elements prices will help all producers, your focus should be on the ones located outside China.

More precisely, you need to think in terms of specific rare earths projects.

In the table below, I’ve selected five rare earths projects. Four of them are in the United States. One is in Canada.

Even though most of the companies that own them are small, all of these projects have established inferred resources of critical elements. This means that there might be mineable material underground at these sites. Projects with inferred resources are much more advanced than the ones that have no resources at all.

I provided the names and market capitalizations of their operators, too.

These companies could benefit from the push to bring rare earths production to the U.S. However, since these are relatively small companies, be sure to position size any investment appropriately. And as always, do your due diligence before investing.

This could be the beginning of another bull market in rare earth elements. As demand soars, companies with deposits located close to home could reap windfall profits.