Kris’ note: There’s no comparison: Jeff Brown is America’s best technology investing expert. Whatever the tech subject, Jeff is always on top of it, and he always has a unique take. It’s why we often share his work.

Today, Jeff gives his take on one of the biggest tech innovations right now. It has gone from pie-in-the-sky to reality in less than 10 years. And if what Jeff says is right, it will reshape our lives, the way we interact, and the way we do business.

We won’t give away the full story here. Jeff explains everything you need to know below. Plus, he shares details on how investors can make the most of what will be a $12.3 trillion megatrend.

Anyway, see for yourself. But in our view, this is one event any serious investor can’t afford to miss. Read on for more…

As we can see in the pictures below, in the space of just a few years, our streets were radically altered by the arrival of a new kind of technology…

In the late 1890s, the most popular vehicle in the U.S. was the buggy, a simple horse-drawn carriage. But in a short span of years, motorized cars began to overtake the buggy as the modern form of travel.

By 1910, it was clear which way the trend was going. And by 1929, the carriage had been virtually eradicated from our roads, with fewer than 90 carriage companies left in the whole country.

And now, we are at that point once again… on the verge of a mass adoption of a new kind of transportation. As investors, we need to make sure we don’t miss the disruption that’s coming…

The technological revolution I’m talking about is self-driving cars. It will be a transition just as big as the one from horse-drawn carriages to motor cars.

And as such, there will be a huge chance to profit.

It’s been amazing to see the progress we’ve made with this technology in just the last decade. Back in 2011, I got to experience an early version of Google’s self-driving car – a Toyota Prius with a whole computer system in the trunk. 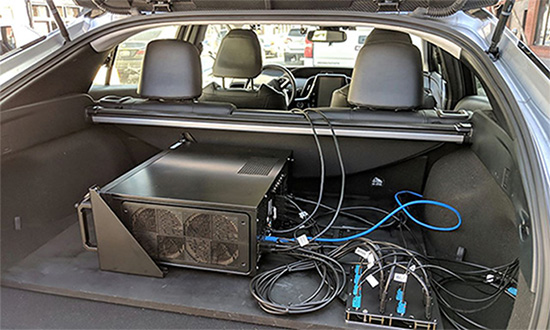 That’s no longer the case.

This year, I got to test a Tesla to see how far this technology has come. And what I experienced was impressive.

You can watch some of my test drive below:


Tesla is on the cusp of making fully self-driving cars a reality.

It’s one of the most advanced companies in this space, largely because it’s been able to gather data from all of its cars that are currently on the road. Tesla implemented its autonomous driving functionality in its Model S cars as early as October 2015, so it has years of useful data to refine its artificial intelligence (AI). 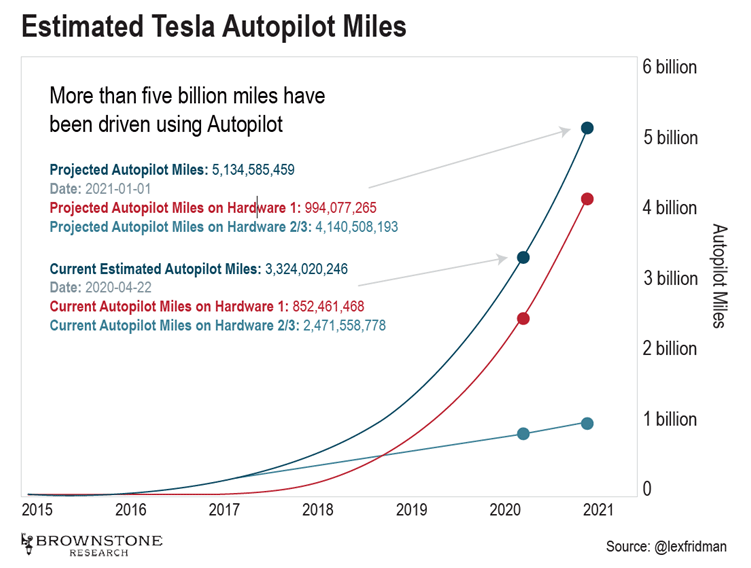 And this July, Tesla launched beta version 9 of its full self-driving (FSD) software. The exciting part is that Tesla is now basing its Autopilot on neural networks. That means it’s essentially modeling its AI on the human brain.

And even better, Tesla isn’t the only company working in this space…

While Tesla is currently leading the pack in the self-driving space, it’s been joined by more and more competitors over the years… another sign of the growing interest in this trend.

Many people have heard of Waymo’s self-driving program. Back in 2019, it began offering rides in a self-driving car through its ride-hailing app in the Phoenix, AZ area. And signs indicate that the Google-owned company may soon be going public… and licensing its software out to carmakers. That indicates great progress.

We’ve also talked about startups like Pony.ai, which is focusing on self-driving semitrailers in addition to passenger vehicles… and Aurora, which bought Uber’s self-driving unit.

But now even the legacy carmakers are making strides in this area to ensure they aren’t left behind. Ford, Volkswagen, and GM have all been investing considerable time and resources into the self-driving trend. In fact, GM signed a landmark deal back in April to provide self-driving taxis in Dubai by 2023.

All of these companies are helping show that self-driving cars aren’t decades in the future… This trend is happening right now.

Once we have cars that can drive themselves anywhere with no safety monitoring by passengers, we can expect many changes to how we live our lives… including some we might not expect.

For example, if we don’t ever actually drive a car, there’s little need for us to carry a driver’s license. There would be no reason for it.

Another new business model that will emerge is companies that manage fleets of shared autonomous vehicles (SAVs), which will be responsible for the insurance.

SAVs rides will likely be even cheaper than an Uber or Lyft, and consumers will never have to worry about car maintenance. Whenever they need a car, the SAV company will have one available, waiting to pick them up and transport them in a quiet, clean car.

Some SAVs may even be free to ride in. I can anticipate a company like Google’s Waymo to offer free rides in exchange for exposing riders to ads and collecting more data on them, for example.

As a result, we will see fewer new car sales to consumers. This will be further amplified by the shift to working remotely.

Ultimately, this transition to self-driving cars will dramatically change the landscape of what we’re used to. It will affect the rental car industry. We’ll see less traffic on the roads… reduced emissions due to fewer cars idling in traffic, and fewer parking lots built. And we’ll begin seeing smaller autonomous vehicles like delivery robots that bring us our groceries or meals.

We’ll see new businesses crop up, and there are going to be incredible new ways to profit as a result of all of these changes.

And yet, this is just one of the ways technology is changing our lives. There are many incredible opportunities out there… and nearly unlimited ways to profit as an investor.

So if you think this trend sounds exciting… I’d like to put one more on your radar that could have just as much potential – or more. On September 22 at 8 p.m. ET, I’m holding an event to tell you about another key opportunity I see coming right around the corner.

You see, Apple just announced its next big launch. And if I’m right, this could be the beginning of a $12.3 trillion megatrend. Already, Warren Buffett, Elon Musk, Jeff Bezos, and Mark Cuban have begun investing billions of dollars… but most investors won’t see it coming.

That’s why I’m going to break it all down for attendees… and show you just how you can get in position to profit. Simply go right here to RSVP.