As early as January 2017, I said to expect “a stock market collapse at least as severe as 1929 or 2008.” And, “I think there’s a very high chance of a stock market crash of historic proportions before the end of Trump’s first term.”

It wasn’t a lucky wild guess, but the conclusion I came to after putting together the different pieces to see the big picture, which is what we do at Crisis Investing.

As you may remember, the Federal Reserve responded to the 2008 financial crisis with unprecedented amounts of easy money. It claimed this would “stimulate the economy.”

Just think of the $3.7 trillion in money-printing programs, euphemistically called quantitative easing (QE) 1, 2, and 3. That money didn’t come from someone’s savings. The Fed simply created it out of thin air.

The Fed’s money-printing programs created enormous and unprecedented economic distortions and misallocations of capital. It ended up creating not just a housing bubble, or a tech bubble, but an “Everything Bubble”… the most massive financial bubble in human history.

I was confident that the Everything Bubble would find a pin before the 2020 presidential election. The coronavirus turned out to be the pin.

But the pin is almost irrelevant. What is relevant is that over a decade of extreme monetary distortions created the biggest bubble ever. It has just started to burst, and there’s nothing anybody can do to stop it.

Consequently, the ensuing bust is going to be much bigger than anything we’ve ever seen.

The reality is that the US is falling into the worst economic collapse since the Great Depression, or what Doug Casey has termed the “Greater Depression.”

And Doug has previously said, “It’s going to be even worse than I think it is.”

The Flipside of Crisis Is Opportunity

Longtime readers know that Doug is one of the world’s most successful crisis investors. He literally wrote the book on it. His book, Crisis Investing, was a New York Times Best Seller for 34 weeks. He’s also hit numerous “home runs” investing in crisis markets.

There’s lots of doom and gloom ahead, but you don’t need to panic.

The danger is what everybody sees. The opportunities are never quite as obvious, but they’re always there.

I think a historic crisis is just getting started.

But it will also create a fortune-building opportunity of a lifetime for the well-prepared.

A crisis often allows you to buy a dollar’s worth of assets for a dime or less. Many of the world’s greatest investors have made their fortunes this way, but anyone can do it.

That’s what Crisis Investing is all about.

As Baron Rothschild correctly observed, the best time to buy is “when there’s blood in the streets.”

The Streets Aren’t Bloody Enough Yet

Since the stock market peaked on February 19, it’s been in a state of turmoil. Stock prices of companies in some industries collapsed by more than 50% as of writing.

There could be opportunities in these beaten-up industries. But in my view, we’re not there yet. We’re just barely coming off the top of the biggest financial bubble in human history.

The pain has only just begun. There is still a lot of air to come out of the Everything Bubble in the weeks ahead.

The Worst Is Still to Come

One of Warren Buffett’s favorite market valuation metrics is the total market capitalization-to-GDP ratio. The higher it is, the more expensive the stock market is.

And right now, it still looks hugely overvalued, even after the recent crash.

The chart below paints a sobering picture.

Today, the ratio is around 132%, still near its highest levels ever. 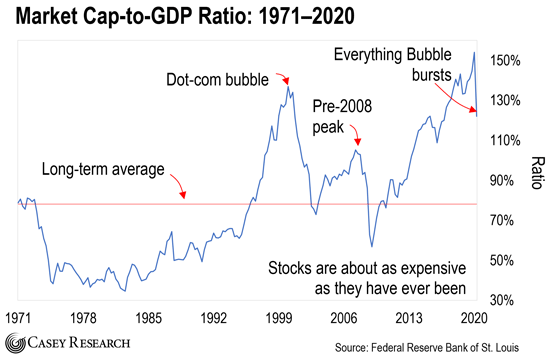 Further, this ratio looks to become even more overvalued as the government releases the GDP numbers in the weeks ahead. Analysts widely expect a historic crash in GDP after the unprecedented shutdown of the global economy, which could quickly thrust this ratio to all-time highs.

In the ultimate aftermath of the bursting of the Everything Bubble, I think we’ll see this ratio not only hit its historical mean of around 80% (noted in the red line above), but dive below it. As you can see in the chart above, the same thing happened after the dot-com and housing bubbles burst.

That means the stock market has a lot of room to fall from here.

Even if the S&P 500 lost half of its current value, it would still be roughly close to the over-inflated peak it hit at the height of the bubble in 2007, right before the last financial crisis. (The red line indicates this peak in the next chart.)

It’s a damning indication of just how overvalued the market is, and how far it could fall. 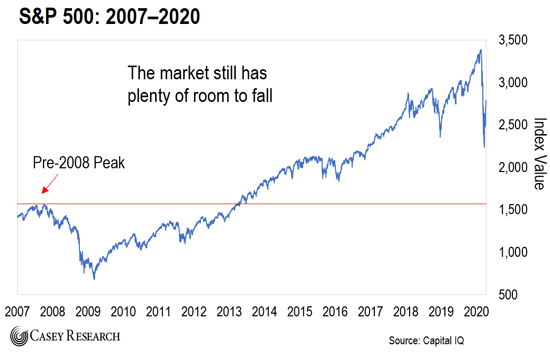 As we can see in the above charts, while valuations are off their peaks, they are still extraordinarily high.

I think the crash has just started. It recalls the old stock market adage about trying to catch a falling safe. It’s better to wait for the safe to crack open on the pavement.

For now, keep some cash available… and don’t panic-sell at the bottom. There will be a time for buying when there’s blood in the streets.

Also, keeping your speculative position sizes small is a great strategy to weather a crisis like this.