Is lithium about to crash?

After all, the metal has staged a massive rally and defied market volatility.

Over the past year, it soared by 169%. Currently, it’s trading at an all-time high.

While higher interest rates wreak havoc in the broad markets and spread fear of an imminent recession, “hard tech” – or the metals that go into new technology trends – continue to set one record after another.

This makes some investors cautious. And understandably so.

But as I’ll show you in a moment, lithium has much more room to run, with no significant downside risk.

Undersupplied and in High Demand

Just like global mobile data traffic, the demand for lithium is growing at a pace we haven’t seen before.

However, the lithium supply isn’t catching up. As a result, the lithium market will be in a state of ever-widening deficit until at least 2030.

Which is a powerful catalyst for its share price. 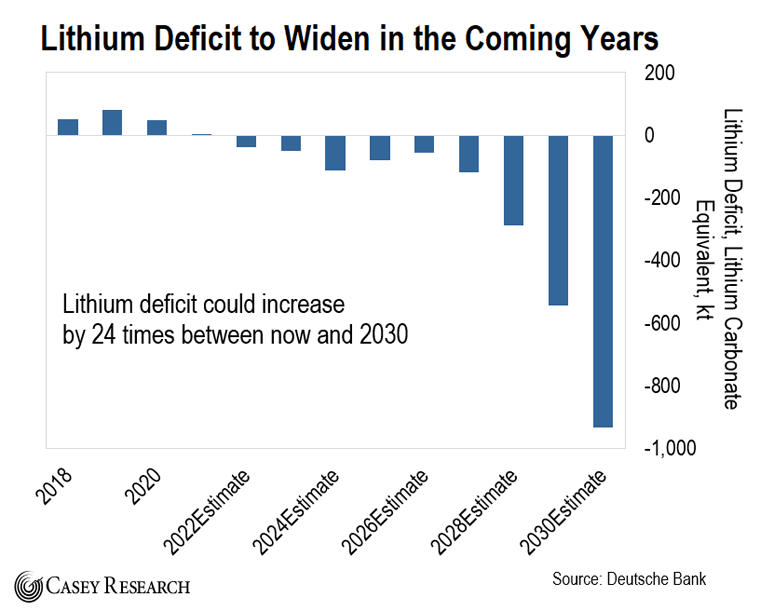 Yesterday, we explained how the 5G revolution needs lithium-ion batteries. But lithium is also used in laptops, phones, and electric vehicles (EVs) for rechargeable power. Currently, the demand for the metal comes from two main markets: battery makers and refineries.

Then, refineries take the low-grade input concentrate and produce “battery-grade” lithium carbonate and hydroxide, which are the compounds that go into batteries. Pure lithium cannot go straight into batteries, as I explained recently.

Then, battery makers take these compounds to produce the technology that powers many of our digital devices.

Another powerful trend working in favor of lithium mining companies is pricing.

Deutsche Bank reports that lithium miners have changed their purchase contract structures to rely more on the current, or “spot,” price of lithium. This means that their revenue will be more aligned with the prevailing market price… which has been soaring.

How to Position Yourself to Profit

Almost any company in the lithium supply chain is poised to profit from the ongoing lithium boom.

But mining remains a risky business. Which means that investors have two options.

First, investors can diversify their portfolio through a broad exchange-traded fund (ETF) like the Global X Lithium & Battery Tech ETF (LIT). It invests in several companies across the lithium supply chain, including miners.

Second – and this option could lead to higher-than-average returns – is to invest in specific mining companies.

Focus on the ones working in the United States and its partners like Canada and Australia. They will benefit the most from the U.S. government’s Inflation Reduction Act, which has dedicated billions of dollars on “new economy” projects such as electrification, decarbonization, and the production of critical elements.

This piece of legislation created a unique investment opportunity. The United States is estimated to grow its share of the global lithium supply from 1% now to 8% in 2030.

It can only get there by accelerating investment in lithium production. And since there is only one operating lithium mine in the country, that also means getting projects to the production stage as soon as possible.

In other words, almost overnight, the United States has become one of the best jurisdictions in the world for lithium mining companies.

And in the coming issue of the Super Spike Advisory – Casey Research’s premium service – we will explore one of the best companies in this space.

There are plenty of opportunities in the exploding lithium market, so focus on the best options available and spread your bets to control risk.