If you’ve been following along in the Dispatch, this shouldn’t be a surprise. Our Casey Research experts have been pounding the table on gold and saying a new bull market is coming.

And their predictions are paying off. Gold has soared almost 20% this year, while the S&P 500 has barely recouped its losses from the March crash.

If you’re new to this story, it’s easy to think that you might have missed the boat.

But nothing could be further from the truth. You still have plenty of opportunities to get positioned as this gold rally gains momentum. And I’ll prove it to you below… along with an easy way to take advantage…

But this is just the beginning. Gold still has plenty of room to run… and could easily break through to an all-time high this year. And that might not be the end.

After all, gold rallies aren’t short-term events. They last years. For example, in gold’s last rally during the financial crisis in 2008, the metal didn’t reach its peak until 2011. 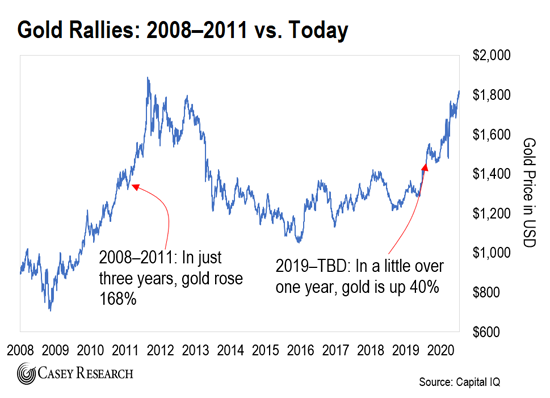 And thanks to the COVID-19 pandemic, gold is about to get a boost…

How COVID-19 Will Lift Gold

The economic effects of the pandemic and the resulting lockdowns have been devastating. With unemployment on the rise and businesses slowly dying off, governments around the world have been forced to borrow enormous amounts of money to provide aid.

The U.S. said it would borrow up to $3 trillion in the current quarter to fight the economic impact of the virus. That will push the budget deficit to at least $3.7 trillion this year, up almost four times compared to 2019.

This is a huge amount of debt in a short period of time. And the only way the government can sustain it is by printing more money and keeping interest rates low.

Printing more money will dilute the value of the U.S. dollar. So it will take more dollars to buy the same amount of goods.

At the same time, the Federal Reserve will keep interest rates low so the government can continue paying interest on its debt. That means assets like Treasury bonds aren’t as attractive to investors. Bond prices, including those of Treasurys, go up when interest rates go down. There’s an inverse relationship between the two.

That results in investors fleeing Treasury bonds and paper money. And they’ll likely turn to gold. Unlike Treasurys and U.S. dollars, gold has a lot of upside ahead of it, and it’s historically protected people’s wealth during an economic crisis.

We’ve seen this before. As you can see in the chart below, interest rates and the price of gold are inversely correlated. When interest rates drop, gold zooms higher. Take a look. 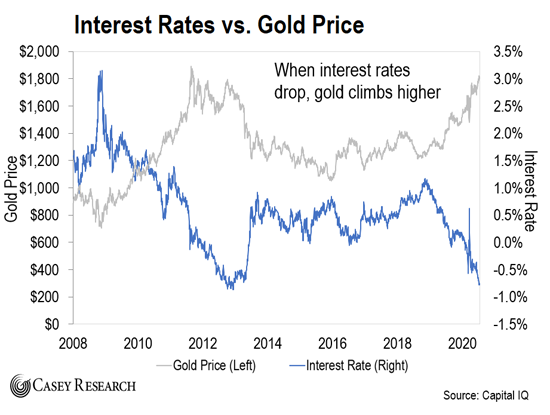 So there’s plenty of reasons to believe that gold will continue rising. If you’re looking to add some exposure, consider buying physical gold first.

But if you really want to take advantage of this boom, there’s another method you should be aware of…

Gold mining stocks are an excellent way to profit from this bull market. And the main reason is that they give you leverage to gold’s rising price.

In this context, “leverage” refers to the relationship between the price of gold and the share prices of gold miners. When gold moves an inch, these stocks can move a mile.

We’re already seeing this in action. Gold miners are up 27% so far this year, while gold is up 18%.

But like we said before, just as gold still has plenty of room to run, so do miners. That means it’s not too late to position yourself for profits.

So however you look at it, we’re in the early innings of a prosperous gold market.

To make the most of it, consider buying bullion or a gold exchange-traded fund (ETF) like SPDR Gold Trust (GLD), which closely tracks the price of gold itself. It’s a convenient way to get exposure to gold without actually holding the metal.

And if you’re looking for exposure to gold stocks, check out the VanEck Vectors Gold Miners ETF (GDX), which holds a basket of major gold miners.

Just remember to position size appropriately. And never invest more than you can afford to lose.

P.S. Gold’s not just a way to profit this year. It’s critical to protecting your wealth from the government’s schemes…

If you want to protect your money from the government’s cash grab, I urge you to check out his briefing here.