Last week at the Dispatch, we started our annual prediction series.

It’s where we make predictions for different key markets and economic indicators for the coming year.

For 2022, we got six out of our eight prediction categories right. That’s far better than most economists.

And as we head into 2023 amidst economic uncertainty, getting the big picture right is more important than ever.

So far in our current series, we’ve covered inflation… the U.S. dollar… and interest rates.

Last year, we predicted gold would head higher. We got it right… but only by a fraction.

The first half of the year looked great for gold. That was until the dollar’s massive rally killed the momentum.

We can see that in the chart below. 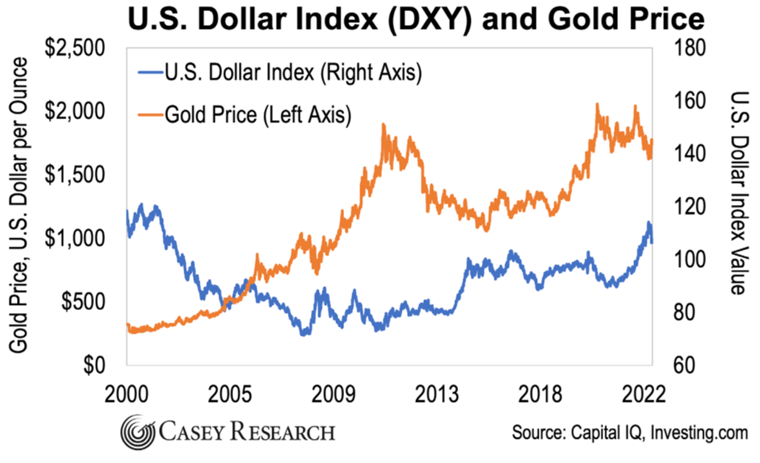 As we write, gold is up about only 1% over the past year. But it could be worse.

Compared to other assets, gold is well ahead of the crowd. For instance, bonds are off about 17%. Stocks are down double digits.

But there is some positive news when it comes to gold. And it’s working in a way we would expect during a volatile year.

In fact, although we look at gold in U.S. dollar terms, it’s up compared to nearly every other major currency in the world.

We can see that by looking at the following chart. It shows gold’s performance in the U.S. dollar, the Euro, and the Canadian dollar. 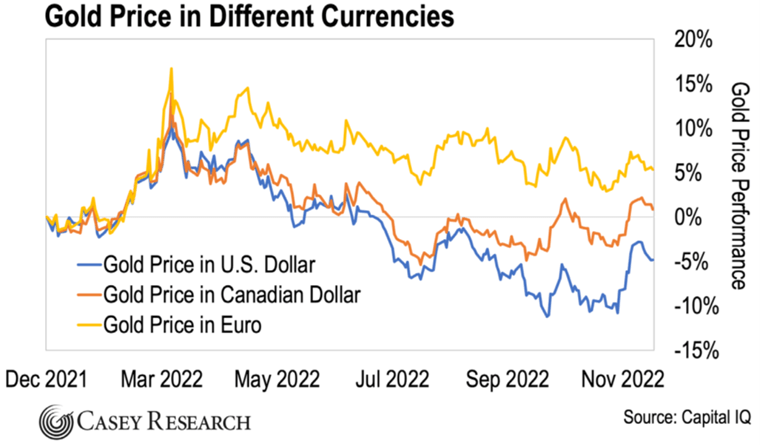 As you can see, gold priced in other currencies gained in value.

That’s clear evidence the U.S. dollar is weighing on gold’s performance. And as we said above, we expect to see the dollar losing steam over the coming year. This will be a positive driver for gold prices.

When the real interest rate is negative, investors lose money. And it’s all due to inflation.

Add this together with a falling dollar… and we expect gold to gain more attention and momentum in the year ahead. 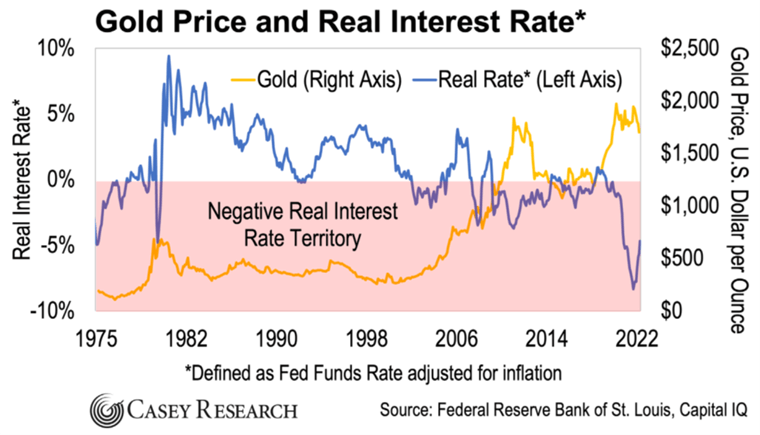 And we’re now very deep in the red zone. Paired with our inflation and interest rates outlook for the next year, we will likely see real interest rates staying negative in the near term.

It’s a perfect environment for a rising gold price. 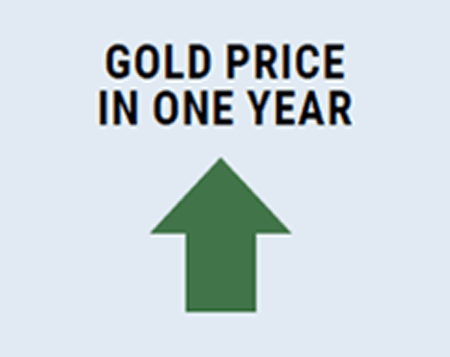 Last year, we said oil was heading higher. In fact, we said, “We see crude higher in 2022. Prices above $100 are likely – and we could see a super spike if any key oil nations like Russia or Saudi Arabia have problems.”

We were right on the money.

The war in Ukraine reorganized the global oil and gas market. The sanctions imposed on Russia as a result reduced the supply of oil. Prices spiked from there.

Now, we still think oil prices were heading higher regardless. However, we can see how the war affected the price of oil right after it started. 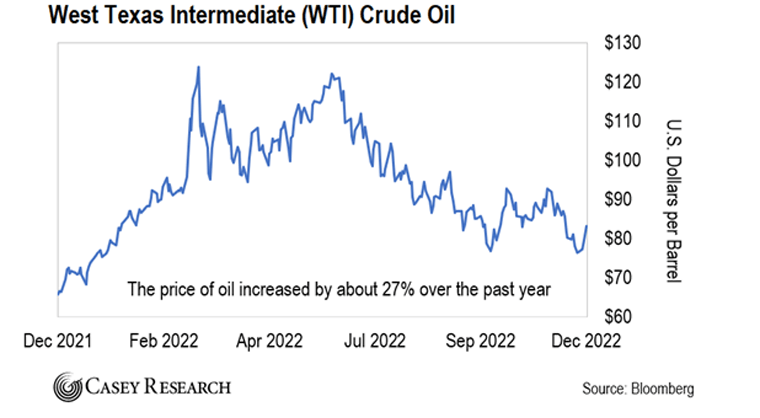 In March, just after the invasion, oil soared to $123.70 per barrel. Fears of an energy crisis kept it above $100 for most of the spring and summer.

What brought the price down from there was a combination of things: fears of a recession… the constant reopenings and lockdowns in China…

But one of the most important causes in our view is the emptying of the U.S. Strategic Petroleum Reserve (SPR). The U.S. established the SPR after the 1973 oil embargo. It consists of 60 large salt caverns spread across four states. In total, it can hold as much as 727 million barrels of oil.

It was intended to insulate the U.S. from oil supply shocks. Certain key industries – and the U.S. military – had access to this oil in times of national emergency.

But as with all things government-related, it’s now a political tool – on both sides of the aisle – in order to pass spending bills and gain points with voters.

For President Biden, the game started long before Russia invaded Ukraine. In November 2021, he authorized the release of 50 million barrels from the SPR. The press release from the White House specifically stated it was “part of ongoing efforts to lower prices…”

When the price didn’t cooperate, Biden unleashed the taps. He pledged to release 180 million barrels of oil in six months starting in April.

You can see what effect that had on oil prices in the chart above.

Today, the SPR sits at its lowest level in about 40 years. The White House claims it plans to refill the SPR when oil prices are consistently around $70 a barrel. That effectively puts a floor on that price.

However, there are some monsters lurking in the shadows waiting to wreak havoc on the oil market.

What’s Next for the Oil Market

Starting on December 5 of this year, the European Union stopped buying Russian oil.

For perspective, in 2020, Russia was responsible for almost three-quarters of the EU’s total crude imports. The EU still needs its supply to come from somewhere. But where it will come from is anyone’s guess.

Back in the U.S., the current political regime has few allies in the industry today. Instead of looking for common ground among the oil majors, the Biden administration continues to make enemies.

While asking them to pump more oil, it simultaneously says the goal is to shut down the oil business in the next decade. That gives no incentive for oil executives to ramp up production or spending.

Over the past couple of weeks, we’ve seen a wave of protests against the harsh lockdowns in China. And the latest news from Guangzhou – a city of 18 million – says restrictions are easing up, despite the city suffering its worst outbreak since the beginning of the pandemic.

That would light a fire under the demand for oil. In our view, it’s the number one variable driving oil prices today.

At the end of the day, all of these factors point to more of the same.

Oil is heading higher in the year ahead. We may not see the price spikes we saw earlier this year. But we believe the price of oil could easily break the $100 per barrel price by the end of 2023.