In the summer of 2006, I took a weekend trip to Miami Beach. It was my first experience with what we later called the credit bubble.

I had dinner at a restaurant called Tantra. It went out of business the following year. I’ll never forget the scene.

After walking in the front door, I said, “Smells like a grass lawn in here.” The hostess told me Tantra appeals to all the senses. Every day, they laid fresh sod in the bar area to stimulate their guests’ sense of smell.

The visual appeal of the place was obvious. Miami Beach is already a spectacle. Here, it looked like they hired dozens of scantily clad models to parade around.

There was a large rope cargo net hanging from the ceiling in one room filled with pillows. The hostess told me it’s where guests could “frolic.”

The weekend I visited, there was a bikini convention in town. One of the companies rented out the side dining room for a private party. It was chaotic.

Finally, I sat down at a table for two next to the kitchen. Younger at the time, I cringed at the menu prices. The food was not great. Overall, it was a total bust.

However, it was highly amusing. 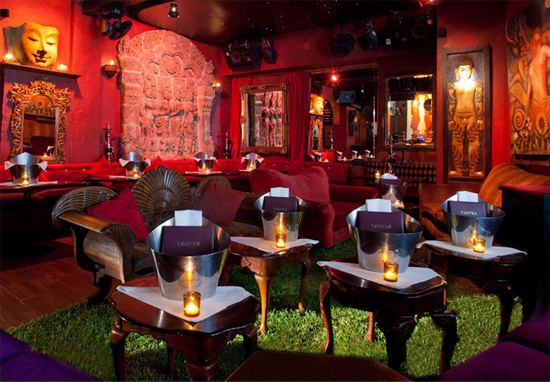 Tantra doesn’t work in a normal capitalist economy. Nobody uses hard-earned savings to lay fresh sod on the floor of a cocktail lounge every day. That only happens with borrowed money in the absence of consequences.

This was a sign of what we now know was a credit bubble… and it’s happening again today.

A bubble is what you get when you prevent natural capitalist forces from sorting out excesses in the economy. In short, when the money flows unnaturally, it ends up in odd places.

The problem with credit bubbles is they grow large, then bust. When politicians pressure the Federal Reserve for extra help to soften the pain of the bust, it plants the seeds of a larger bust to come.

The U.S. economy used to have recessions. That’s a normal part of a capitalist system. I call what we have today a “crisis system.”

The 2002 recession was the last one of our time. The Fed got involved by lowering interest rates from 6.5% to 1%. At the time, that was unprecedented. 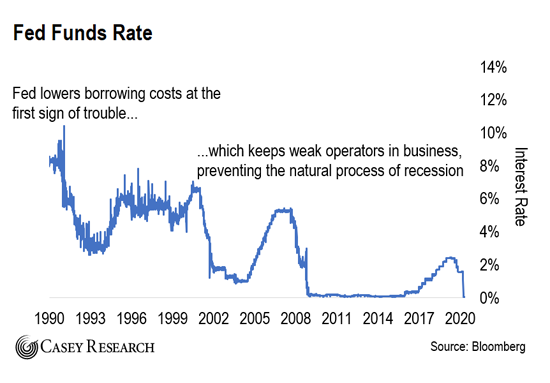 That meant borrowers all of a sudden paid a lot less interest on loans. It helped them survive the recession. The problem is, some of them deserved to fail.

I know it sounds inhumane. However, recession is the most humane way to rid the economy of bad operators.

Take Tantra, for instance. While I can’t know for sure, my guess is the owners benefited from dirt-cheap borrowing costs. I don’t know anyone who’d spend hard-earned savings to lay fresh sod on the floor daily.

In a recession, business activity slows. Fewer people eat out. That means it’s harder for the restaurant to pay its rent, payroll, and other bills.

Meanwhile, the more efficient operators, the ones who don’t waste money on daily indoor sod installation, hunker down and survive.

Prior to the Fed’s overreaching into markets, everyone knew how to handle recessions. Think about the hard-working restaurant owner who puts on an apron and works alongside his staff. He sets an example. His work ethic shows the staff that a little sacrifice now means keeping their jobs. It might mean taking market share from competitors who don’t survive the recession.

Throw that out the window. These days, at the first sign of trouble, the Fed ramps up its effort to soften the blow of recession. Interest rates of 6% are a distant memory. These days, anything over 0% seems excessive.

This won’t go on forever. My guess is you wouldn’t lend your hard-earned savings in exchange for a 0% return. You certainly wouldn’t lend it to a restauranteur who planned to use it for a turf flooring.

In our current “crisis system,” every bubble is bigger than the last. When it pops, the mess is also bigger.

The final bubble will make a mess so large it triggers a financial reset. What that means is the pattern of bubble, crisis, bubble, crisis continues until everyone goes along with it, assuming another bubble follows.

People get used to the pattern. The final bubble explodes, and there’s no more steam left in the system. It resets. The price of everything converts to a new value under the new money system. It happens overnight. At that point, it’s too late to prepare.

Today, your incentive is to not prepare. Preparing means spending less than you earn, putting aside the difference for tomorrow.

Meanwhile, the instant there’s a sign of trouble, the Fed and the government step in with a rescue plan. They have the power to pick survivors and set the terms. Try to see the pattern. It’s right in front of you, if you care to look.

Editor’s note: It’s still possible to profit in our current “crisis system.” You just have to identify the right patterns… and pinpoint megatrends that are being overlooked by the mainstream.

And the coming 5G revolution offers a lucrative opportunity. But it can’t happen without an important “Master Key” technology. This hidden trend is still not being reported in the mainstream press… and could mean life-changing gains for investors.

Go here to learn all the details.