Rachel’s note: Right now in America, prices are anything but stable. Across the board, prices are soaring – gasoline, food, cars, and everything in between.

The Federal Reserve has vowed to take “forceful and rapid steps” to fight inflation. But the problem is, the Fed doesn’t seem to know exactly what inflation is or what causes it.

So today, financial expert Nomi Prins will delve into the true definition of inflation… what causes it… and what’s next for the U.S. economy.

She’s also hosting a special event tonight where she’ll do a deep dive into the coming energy crisis… and what you can do to prepare your portfolio.

What’s more, Nomi will reveal a special investment that could hand you up to 50 times your money. You won’t want to miss it, so sign up here.

Then, read on for more about safeguarding the buying power of your dollars…

“The bedrock of our economy.”

He was speaking at the Jackson Hole Economic Symposium, an annual event surrounding global economic issues.

He went on to say, “Without price stability, the economy does not work for anyone.”

But as we all know, right now in America, prices are anything but stable. Across the board, prices are soaring.

Americans are paying 75% more than this time last year for fuel oil. Gasoline is 44% more expensive. Food costs nearly 11% more. And the price of a new car is up more than 10%.

Powell has vowed to take “forceful and rapid steps” to fight inflation.

And therein lies the problem. The Federal Reserve doesn’t seem to know exactly what inflation is or what causes it.

So I want to take a moment to discuss some fundamental questions about inflation.

What causes it? How is it measured? What’s next?

Because as you’ll see, the value of your money is going down at an even faster pace than you’ve been led to believe.

And with a global energy crisis looming, your dollars will stretch even less this winter.

But the reality is that they are two very different things…

And there’s a reason the government is happy to allow the mix up.

The U.S. government uses the CPI to measure inflation and determine economic policy.

So, when you hear about inflation from some government official or in the mainstream media, they’re most likely talking about CPI.

CPI measures changes in the price level of a basket of consumer goods and services.

But there are several problems with it.

First, prices don’t rise in unison. For instance, the prices of big-ticket items – like transportation, college tuition, and housing – tend to rise much faster than other things.

That’s because scarce and desirable goods and services are more prone to increasing prices.

Second, it’s in the government’s interest to understate inflation.

That’s because recognizing the actual effects of inflation would force some politically unpopular budget decisions.

The government would have to shell out a lot more money on Social Security programs, for example. That’s because they are tied to CPI.

And it would be forced to make cuts elsewhere to pay for this.

The government, of course, prefers to do neither.

This alone should make you skeptical about using CPI to get an accurate picture of the rate of inflation… and how it is really affecting your purchasing power.

Using CPI to mean inflation also confuses cause and effect.

Price increases do not cause inflation.

In other words, the local grocery store, the pharmacy, or the housebuilders are not responsible for inflation.

So what’s the correct way to define and calculate inflation? And who is responsible for causing it?

The Correct Definition of Inflation

If you grew up with the above definition of inflation, it may surprise you to learn that the original – and correct – meaning of inflation is an increase in the money supply.

It is, in fact, an increase in the money supply that causes prices to increase.

Over the years, however, that definition has changed.

For example, since its founding in 1828, Webster’s Dictionary had always defined inflation as an increase in the money supply.

Then in 2003, it changed the definition to mean a rise in the general price level.

This took the focus off the main culprit for inflation – central banks. They are the entities responsible for the money supply, after all.

This shift in focus and definition suits the U.S. government. It allows it to increase the U.S. money with impunity.

The pandemic is a prime example.

In March 2020, the COVID panic was kicking off. The U.S. stock market was crashing. People were panicking as they watched their portfolios get wiped out.

They turned to the Federal Reserve to do something.

In response, the Fed fired up its printing press.

In 2020, the Fed’s broadest measure of the money supply, called M2, rose by an astonishing $3.8 trillion. That was a one-year increase of nearly 25%.

For perspective, the annual economic output of all 332 million people in the U.S. is about $23 trillion.

By late summer 2020, the stock market had recovered its losses.

But the U.S. government was stuck in a never-ending cycle of stimulus payments and other measures implemented to support the economic recovery from COVID.

It had to pay for them somehow. 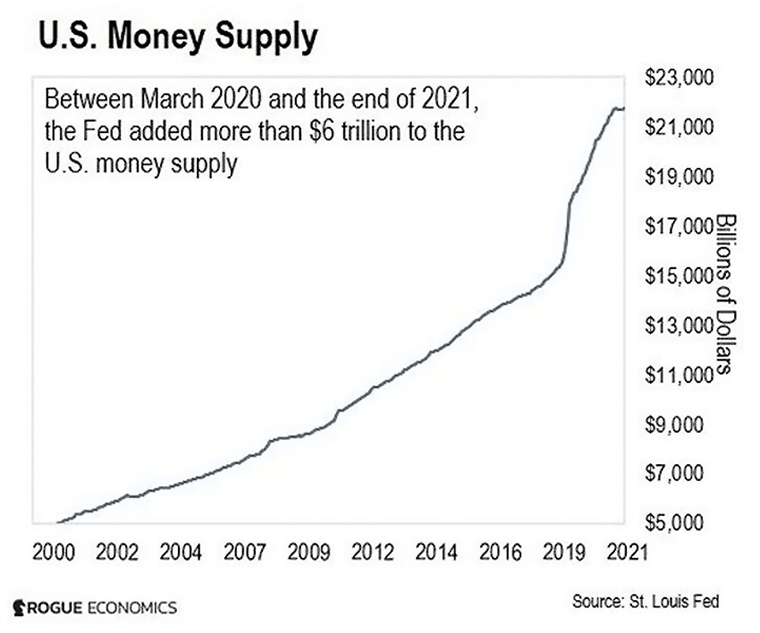 It’s no wonder the powers that be would rather you look at the CPI. Compared to 40%, the latest CPI reading of 8.5% doesn’t look so bad.

The amount of money creation and currency debasement the U.S. government is engaging in is, frankly, shocking.

And if history is any guide, we can expect more inflation – by both measures – down the line.

With President Biden’s gigantic $5.9 trillion federal budget for fiscal year 2022, the total deficit in 2022 will reach more than $1.4 trillion. You can see this in the next chart showing the deficit projections for the next 10 years. 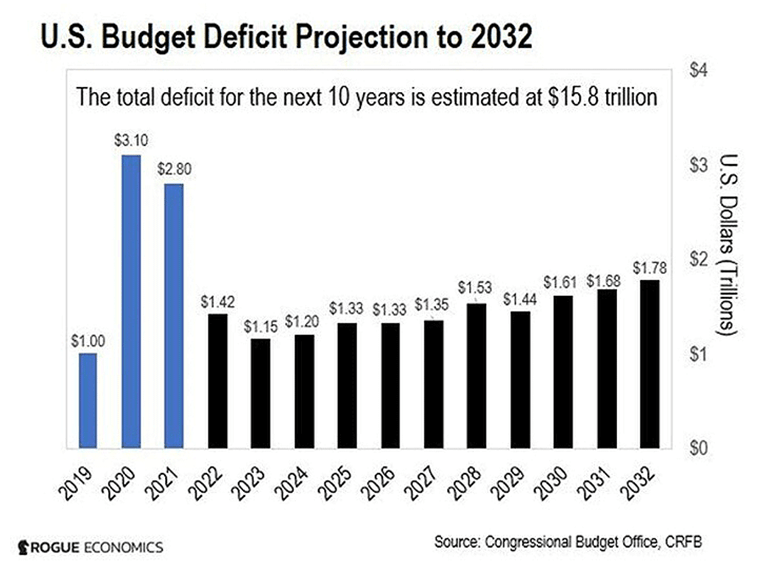 More importantly, the total projected deficit between 2022 and 2032 (black bars on the chart above) will be close to $16 trillion.

The only entity capable of financing this shortfall is the Federal Reserve.

Even according to the government’s official CPI numbers, inflation hit multi-year highs in 2022. The actual situation is likely much worse.

The latest CPI inflation figure is 8.5%.

Gas prices have come down slightly recently. As have the prices of certain items that big retailers like Target and Walmart are putting on sale.

So we may see a near-term reduction in inflation.

But we’re not out of the woods. Especially as we head towards winter.

Winter is typically a time of higher energy costs. And that could be compounded this year by geopolitical tension in Europe.

In the early 1980s, CPI was in the double digits. I wouldn’t be surprised to see it exceed its previous highs as this situation gets further out of control.

With each new dollar the Fed creates, the buying power of each dollar in your bank account decreases.

And if you own a car or heat your home with oil or gas-based fuels, you’ll feel the effects of this dwindling buying power even more this winter.

That’s because there’s a global energy crisis brewing. We saw the start of this earlier in the year, when oil prices rose after Russia invaded Ukraine.

And even though fuel prices dropped back somewhat during the earlier summer months, we’re already seeing them spike again as winter approaches.

This will lead to lots of uncertainty and market volatility in the coming months. If you’re in the market, this will hit your portfolio.

And this will be further exacerbated by increasing global energy demands in the winter months.

That’s why tonight at 8 p.m. ET, I’m going to do a deep dive into the energy crisis… and what you can do to prepare your portfolio…

I’ll talk about the five sectors I believe will suffer as the energy crisis rages… and the five that I believe can provide opportunities to profit.

I’d love for you to join me. Just click here to reserve your spot.

P.S. At this event tonight, I’ll also reveal a special investment that could hand you up to 50 times your money. You won’t want to miss it.

So make sure to save your spot now, and mark your calendar for 8 p.m. ET tonight (Wednesday). I’ll see you there!