Editor’s note: Throughout this crisis, our experts at Casey Research have warned against betting on a rapid recovery. And just last week, markets saw their biggest plunge since the selloff in March.

Th talking heads on TV want you to believe that the virus is behind this mess. But that’s just scratching the surface. What they won’t tell you is that the real culprit is the Fed…

So today, we wanted to share this piece from our colleague Dan Denning. Dan’s a fellow contrarian who’s studied all kinds of financial markets for almost two decades.

Below, he explains why the Fed’s created the most dangerous, deceptive market he’s seen in his entire career… and what you can do to stay afloat in the fallout…

Where next? How about an 80% crash from here on the S&P 500? Maybe you think the Federal Reserve won’t let that happen. But I wouldn’t be so sure.

Below, I’ll explain why this is the most dangerous market I’ve seen in my professional career. Then, I’ll show you the best way to protect your wealth.

To start, consider this…

The initial down moves from the 1929 and 2000 crashes were matched by almost identical up moves. It was only after those huge dead cat bounces that the real bear market took hold.

If you think a fall that big is impossible, take a look at the chart below.

Around 20.2 million Americans lost their jobs between March and April. If you want to know how perverse Wall Street is, stocks rallied when the report came out.

Why? Because economists expected 22 million job losses. The actual number was better than they expected!

Has it occurred to analysts and institutional investors that people without incomes can’t spend money they don’t have?

Sure, they can spend the $1,200 checks the government sent (assuming they don’t save the money or pay down debt with it instead). But after that?

What’s worse, the chart above shows that all the jobs added to the economy since the Great Recession of 2009 disappeared earlier this year. They were in retail, hospitality, or the service sector. Many of them will never come back.

In fact, a paper out of the University of Chicago’s economics institute estimates 42% of recent layoffs could be permanent. That shows you how marginal or fragile many of those jobs were.

Despite what looks like a hammer blow to corporate earnings for 2020 (and far beyond), stocks are up. What gives?

It’s About the Principle, Not the Size

The answer is in the chart below. You can see that, since January 2020, the Fed has added nearly $3 trillion to its balance sheet. 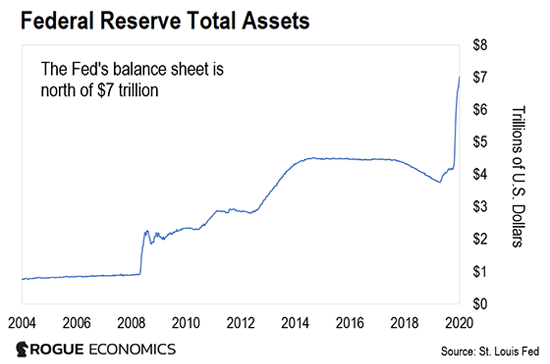 As part of this, on May 14, the Fed began its long-awaited program to support liquidity in the corporate bond market.

It did so by paying BlackRock – the world’s biggest asset manager – to buy corporate bond funds. The exchange-traded funds (ETFs) BlackRock bought are managed by… BlackRock.

The program started with $305 million in purchases. Its “corporate credit facility” grew by another $1.5 billion in the next week. Those are modest numbers compared to the Fed’s support of the mortgage and Treasury markets ($1.8 trillion and $4 trillion, respectively).

When the bear resumes, the Fed’s balance sheet will grow to $10 trillion faster than you can imagine.

But it’s not the size that matters here. It’s the principle.

And the principle is that the Fed is directly supporting asset prices, subsidizing failing corporations, and exposing itself – and indirectly you, the taxpayer – to corporate bankruptcies.

But what is shocking is that Hertz bonds are included in two of the corporate bond ETFs BlackRock purchased on behalf of the Fed – the iShares High Yield Corporate Bond ETF (HYG) and the SPDR Bloomberg Barclays High Yield Bond ETF (JNK).

In the grand scheme of things, the Fed isn’t going to take a huge loss from its exposure to one or two bankruptcies. But what about dozens of bankruptcies? Or hundreds?

Not a Liquidity Problem

That debt was always going to be a problem. Why? It was used to buy back shares and artificially boost earnings. Today, it’s an acute problem because the real economy has been driven into a granite wall by incompetent politicians and reckless CEOs.

Now we have a solvency problem. Companies with no cash flow won’t be able to service their debt. Investors who own that debt as an income-generating asset are left holding the bag.

You know the drill from here. Ratings agencies call the fire department after the building has burned down. Risky borrowers are downgraded. Investors sell the garbage. And then they sell whatever else they can (stocks, bonds, even gold) to raise cash. This is the deflationary spiral we saw in 2008.

It’s what the Fed thinks it can avoid now with a printing press. But I don’t have to remind you that central bankers can’t print gold.

They can create Federal Reserve Notes with a few keystrokes. And that DOES increase the money supply. But it doesn’t automatically increase the velocity of money. That is, the amount of money circulating and “doing work” in the real economy.

So what DOES it do?

It creates a fake sense of prosperity and a real wealth transfer. It makes Wall Street and billionaires richer. Bank of America reckons $4 trillion in central bank asset purchases corresponded with a $15 trillion increase in the value of global stocks.

And according to the group Americans for Tax Fairness, the billionaire class added nearly half a trillion dollars to their net worth as the economy was hemorrhaging jobs during the lockdown.

King of All Fakes

The point is, this is the fakest, most deceptive, most dangerous market I’ve seen in my professional life.

I couldn’t tell you what the catalyst will be for the next leg down. It could be a tidal wave of corporate bankruptcies. That would lead to higher unemployment numbers AND could trigger a cascade of selling in financial markets.

Or it could be something similar to the current pandemic – in other words, something we knew was possible but that we were complacent about expecting.

What I can tell you is that it beggars belief that 40 million people can lose their jobs while the stock market makes new highs. That can only happen in a fake market, with fake media, fake prices, fake news, and fake money.

This is the king of all fakes. A great monetary debasement is underway in America. It will eventually result in a devastating hyperinflation and a lower standard of living worldwide for many years.

At the moment, it’s masquerading as higher stock prices. And it’s being partially concealed by the huge deflationary forces unleashed by the coronavirus lockdown.

But don’t let yourself be faked out.

Prepare for the inevitable stock market selloff. And always remember: Debt is not wealth. Gold is money.

Keep these things in mind and we’ll get through this… maybe not together, but in communities we choose to be a part of, surrounded by friends and family.

P.S. What’s next? What changes are coming to our government, our society, and our economy? And what should you do with your money today?

My colleague, Bill Bonner, has been busy in isolation in northwest Argentina. And he just finished a detailed review of the political, economic, and monetary consequences of the COVID-19 crisis. It’s called After Armageddon, and it’s a must read…