But is it real growth, or fake growth?

Real growth happens when entrepreneurs and capitalists put their minds and money to work.

At Casey Research, we prefer the former. It’s the only true path to wealth.

But we’re also realists. That means rather than fighting against the central planners, we look for ways to profit from their actions.

The good news is there are plenty of opportunities to profit… including one that has been playing out for the past seven months.

Before we go any further, welcome to the Dispatch. Whether you’re a regular reader or this is your first time, we want you to know this newsletter has two goals:

We do this by showcasing the ideas from our in-house investing experts: Nick Giambruno, Dave Forest, and the founder of our business, Doug Casey.

We cover a range of themes, from macroeconomics and politics, to investment ideas and stock market observations. Our goal is to make sure you take away something valuable from each issue. Whether it’s actionable, or informational.

That brings us to today’s edition.

Dave Forest: “All the Makings of a Mania”

In early December last year, in the “prediction issue” for his Strategic Investor service, Casey Research expert Dave Forest said that energy-related stocks were set to boom. Part of that would be due to inflation.

Oil and gas are also hard assets. They’re going to lift from inflation as all the new cash sloshes around the economy…

As a final note on energy, keep an eye on uranium. Last month, the Senate Appropriations Committee approved $150 million to buy U.S. yellowcake for a strategic uranium stockpile.

As the chart below shows, prices for uranium stocks, oil stocks, and clean energy stocks have all taken off since the November election. 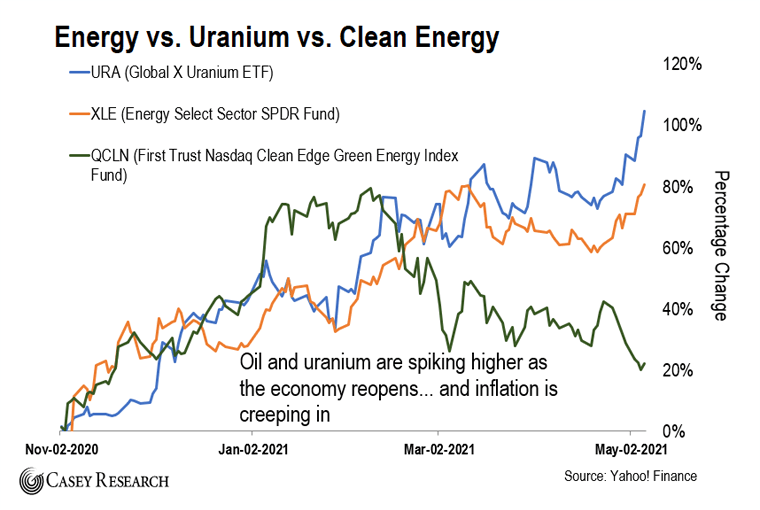 Dave was right about the “mania” for clean energy… as investors figured Democrats would favor that sector. And he was right on oil and uranium stocks, because investors thought a Biden administration might limit supply.

As for clean energy stocks, they performed much better than oil and uranium stocks, right up until inauguration day.

That was pretty much the peak. Since then, the hype has come out of the clean energy story, and those stocks have fallen. Meanwhile, oil and uranium stocks have moved higher as the U.S. economy reopens.

So instead of focusing on any “Green New Deal” clean energy plan that may take years to happen, investors are focusing on what’s happening right now.

And right now, gasoline prices are surging. According to the Associated Press:

The highest average price in the nation right now is $4.16 a gallon in the San Francisco Bay Area. The lowest average is $2.55 in Baton Rouge, Louisiana.

The Energy Information Administration (EIA) says the average price nationwide for regular gasoline is $2.77 per gallon. That’s up from $1.72 in April last year.

After all, the U.S. is opening up again. Many states are easing COVID rules.

People also feel more comfortable traveling. After hitting a low of just 3 million monthly airline passengers last April, this number has already increased to 30.8 million in January this year. And it will likely grow further in the months ahead.

Not to mention that as people return to work as economies reopen, it likely means more money in consumers’ pockets for spending and investing.

In short, for investors it looks like a tale of two trades:

So what’s an investor to do?

You could argue this price action will tell us which sectors will benefit most from the economy reopening. And based on the latest EIA figures for 2019, fossil fuels and nuclear account for 89% of U.S. energy consumption.

Clean energy use will grow… But it will still take years to develop. It’s not a quick process to build an entire clean energy infrastructure. Meanwhile, it’s easier for fossil fuel energy companies to quickly get back to full capacity.

To take advantage of these moves, this is where the “10 x 10” Approach works perfectly.

And in a third column, you could choose a handful of stocks related to “clean” energy. Note that doesn’t mean just solar and wind power companies.

(Dave recently put out an urgent briefing on rare earth elements… check that out here.)

Each of these ideas give you that chance.

Bottom line: there are big catalysts at hand. And for investors, we’re certain that means it’s far from being too late to make a play on these sectors.