We hear it every week.

Seriously, we’ve lost count how many times people have told us this industry is dead.

But it’s not dead… Far from it.

In fact, it’s getting stronger.

In today’s Dispatch, we’ll get into what is arguably the most underappreciated investment trend right now… a trend that Dave Forest says will result in some of the biggest returns investors have seen in this sector since the early 2000s.

Ever since commodity prices peaked after the 2008 Great Recession, we’ve heard nothing but how commodities investing is dead.

For proof, you only have to look at a chart of the CRB Commodity Index: 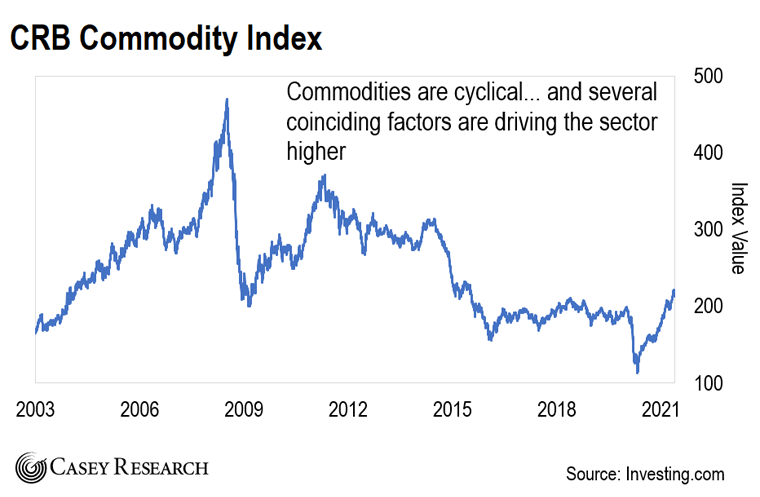 From the second peak in 2011, it was downhill for most of the next five years. Then it had some respite, until early 2020… and then, collapse.

But since then, commodity prices have rebounded. And in a big way, too.

There’s Only One Outcome for This

From an index low of 110 last March, it has almost doubled to today’s level of 213. This rebound explains why there has been so much talk in recent weeks about inflation.

According to Dave Forest, Casey Research’s go-to commodities investor, we’re right in the middle of a new growth cycle for commodities. A period when inflation, economic growth, and technological innovation can only have one effect on commodities – much higher prices.

And when you’re a seasoned commodities investor… like Dave Forest is… you know this very well.

There are long stretches where it’s all down… But if you’re aware of this trend, it’s fairly easy to catch the upswing and time your investments in commodities for the best gains…

Playing the Cycle for Maximum Gains

That’s because industries need certain commodities. And they can’t just stop making the products without it causing a major disruption.

When commodities are on an upcycle and they’re more expensive (because of inflation or a supply and demand problem), tech firms might have to substitute some components of their tech for cheaper ones.

After all, if you pass on rising costs to consumers, they’ll probably look for a cheaper alternative… or just hold off on buying.

So companies try to make do with cheaper parts. But it’s not possible in all situations.

That happened with Toyota in 2018. Instead of using neodymium or dysprosium for the magnets in its hybrid cars, it used the cheaper lanthanum and cerium. All of those elements are rare earths.

This ongoing demand for these rare earth elements, plus the cyclical nature of commodities, partly explains why Dave was able to help his readers recently cash-in on a double with rare earths miner and producer, Lynas Corporation (LYSDY). It also explains why another of his rare earths plays (still an active position) is up 532%.

The whole tech story, along with the inflation pressure, is why Dave is so positive about the outlook for commodities. Because despite all the attention given to the end-uses of tech, such as artificial intelligence, 5G, self-driving cars, and even cryptocurrencies, this tech is only possible because of certain key commodities.

If Dave is right about that (and we suspect that he is), it means that right now is the best time since the early 2000s to invest in commodities and commodities-related stocks.

That’s why we’ll devote the whole week to Dave Forest and his outlook for commodities and technology. Dave is one of the few analysts around who understands the unbreakable relationship between what most people would consider to be two seemingly unrelated sectors.

So make sure you tune in each day. Today, we’ve hit mostly on the commodity side of the bargain. As the week progresses, we’ll look more at it from the tech angle. Plus, we’ll share some ideas on where you can find the best profit potential.