Justin’s note: We’re doing something a little bit different today… and it starts with one of the smartest guys in finance – Whitney Tilson.

You may not know him… but he’s the guy who bought Apple at $1.50 per share. He called the dot-com crash, the housing crisis, and more. So when I saw he was sharing some investing wisdom from his 20 years on Wall Street, I wanted to be sure I passed it along.

In this essay, he covers how to use one of his favorite investing tools. As you’ll see, it fits right in with our ideology at Casey Research…

I’ve learned a lot of things over my 20-year career on Wall Street.

But perhaps nothing is as valuable as talking about investing with average folks. I call it the “cocktail party indicator.”

Whether it’s your trainer at the gym, a neighbor who has never shown any interest in the markets, or the proverbial shoeshine guy… when you hear these folks talking about how much money they’ve made in bitcoin, 3D printing companies, or the latest hot IPO… run, don’t walk, the other way.

I’ve found, again and again, that when the least knowledgeable investors among all of the people I know are piling into whatever is hot, it’s usually very near the top of a bubble.

Today, I’ll give you another example of how you can use the sentiment of average investors to your benefit – instead of riding the bandwagon to disaster…

While the rest of the investment crowd is busy looking for the next way to get rich quick, I strongly suggest taking a different route.

I buy investments that are so hated, you would be embarrassed to say you own them at a cocktail party.

The best example that comes to mind is the only time in my life I bought an oil stock… You guessed it – BP in 2010, just after the Deepwater Horizon oil spill. Shares had gotten absolutely clobbered, falling from around $60 in April to a low of $27 in June.

Indeed, it was an environmental calamity, and a number of people lost their lives in the tragedy. CNBC’s Jim Cramer went so far as to call the stock “unownable.” That week, The New York Times wrote:

It seems unthinkable, even now, that the disastrous oil spill in the Gulf of Mexico could bring down the mighty BP. But investment bankers get paid to think the unthinkable – and that is just what they are doing.

The idea that BP might one day file for bankruptcy, particularly as part of a merger that would enable it to cordon off its liabilities from the spill, is starting to percolate on Wall Street.

The fear in the market – bordering on hysteria – was music to my ears. I’d analyzed the fundamentals and was convinced that the company wouldn’t have to file for bankruptcy… and that the stock was an incredible opportunity. So on June 9, 2010, I appeared on CNBC’s Fast Money. 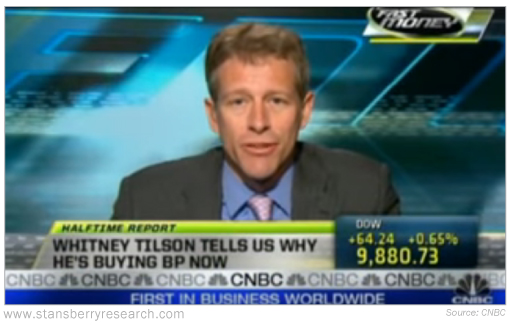 BP deserved the anger and blame. But when it came to the company’s future, the crowd was just flat-out wrong. Here’s what I told viewers that day:

What everybody’s missing here is this is truly one of the most profitable businesses on the planet. They have managed to screw everything up. There’s really no excuse as best I can tell in terms of allowing this disaster to happen. The PR has been horrific ever since. And BP is going to pay billions and billions, maybe even tens of billions of dollars for this debacle.

But what everybody is missing is this company consistently earns well north of $20 billion a year in profits, and keep in mind all the damages are paid for with pre-tax money, so now we’re talking close to $30 billion a year. And it’s trading at five and a half times earnings, paying a 9% dividend yield…

We fully expect the headlines to be horrible for a good, long time. But the stock is just too cheap.

That day, BP shares closed around $29. By early August, the stock was trading around $41. Folks who took my advice were up 40% in just two months.

When I looked at BP, I saw a company anyone would be embarrassed to own… And yet, it was a huge, profitable business – the kind that can weather a storm. Not only that, but it was trading at a dirt-cheap price compared to what it was worth.

Those are odds I like in an investment. And as my years on Wall Street have taught me, it’s a setup you should always be searching for in the markets.

Remember – when you find an investment so hated that you’d be embarrassed to talk about it at a cocktail party, you might just be onto something good…

Justin’s note: On Wednesday, April 17 at 8 p.m. ET, Whitney is going on-camera to reveal the secret to his investing success… and announce the biggest prediction of his career. Just tune in online for free, and you’ll discover how he finds ideas that could double – or triple – your money. Go here for more details.

Do you have any “embarrassing” investments? Do you scrutinize your holdings through a contrarian “cocktail party” lens? Let us know at [email protected].