Three years ago, I put cannabis investing on your radar…

At the time, there were only a dozen or so publicly traded cannabis companies. Today, there are well over 300.

Before the recent crisis, new ones seemed to be popping up each week. Others were simply adding “cannabis” or cannabis-related words to their company names to tap into the green gold rush.

The truth is, most cannabis companies are junk with abysmal financials. But despite their lack of business potential, many of these stocks had been soaring during the boom.

It recalls Doug Casey’s saying that “when the wind blows even a turkey can fly.”

Was there a bubble in cannabis stocks? Absolutely.

But that doesn’t mean the underlying megatrend of the global legalization of cannabis is over.

There are still big profits ahead, but only in a select few cannabis companies that can survive over the long term.

Separating the Wheat From the Chaff

Allow me to explain.

In many ways, the situation with cannabis right now is reminiscent of the bursting of the dot-com bubble, which also saw hundreds of tech companies go public with dubious prospects in the years leading up to it.

Just because the dot-com bubble burst didn’t mean the opportunity to profit from tech and internet stocks was over. The internet was real and continues to create enormous wealth to this day.

Nonetheless, the bursting of the dot-com bubble was an extinction-level event for hundreds of companies and extremely painful for those who would survive.

For example, here is a chart of Amazon’s share price, which declined over 94%.

But if we zoom out and look at the big picture, the bursting of the dot-com bubble is an unnoticeable blip on Amazon’s long-term price chart. 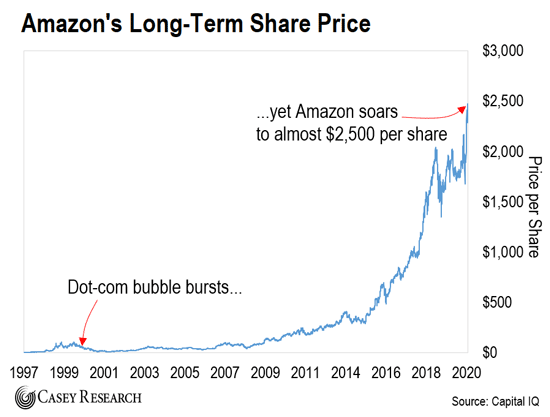 The same is true for Microsoft, Apple, Nvidia, Adobe, Intuit, and numerous other companies that survived the bursting of the dot-com bubble and went on to become industry dominators. Check out Microsoft’s and Apple’s charts, too… 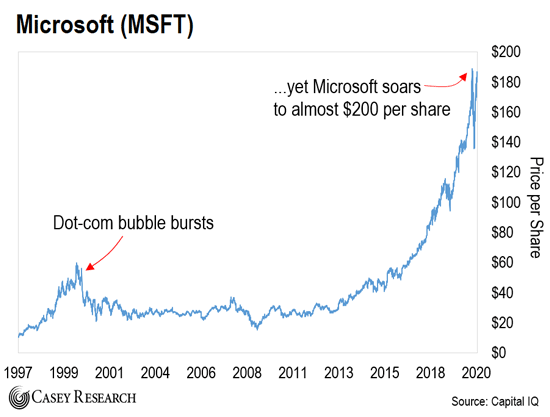 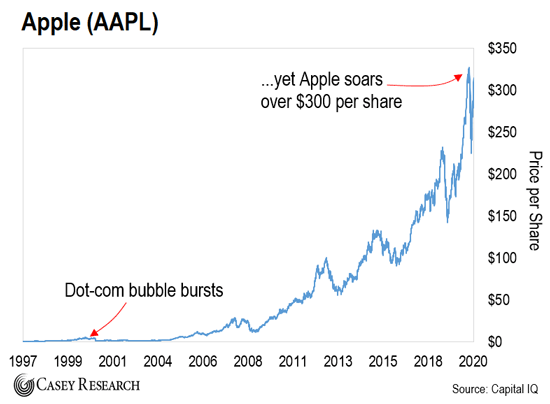 The point I am trying to make here is that we have a comparable situation today with regards to legal cannabis.

Like the internet, global cannabis legalization is a real, long-term megatrend that will unleash unimaginable wealth.

But with the bursting of not just the cannabis bubble – but the Everything Bubble – and the biggest economic downturn since the Great Depression, it’s going to be an existential crisis for most cannabis companies.

Even before the COVID-19 hysteria and recent market crash, most cannabis companies were running low on cash and struggling to raise enough capital to keep the lights on as funding sources dried up. In other words, an already dire situation has become exponentially worse.

That’s why I think there’s an excellent chance most of the public and private cannabis companies will dry up and disappear in the months ahead.

We could easily go from having over 300 publicly traded cannabis companies to fewer than 30.

Almost all of them don’t.

Like the survivors of the dot-com bubble that went on to become industry dominators and deliver enormous profits to shareholders, I believe the cannabis companies that survive the coming turmoil will do the same.

In other words, I suspect the long-term charts of the cannabis industry dominators will resemble their counterparts who survived the dot-com bubble.

US Legalization Will Be the Final Catalyst

The US is the main pillar holding up cannabis prohibition. And it’s a shaky pillar that’s getting ready to crumble. Once that happens, the rest of the world will quickly legalize cannabis, too.

It’s sort of like how the Soviet Union held up communism. Once it broke apart, communism was effectively dead the world over.

When you consider the enormous medical, recreational, industrial, therapeutic, and accessory markets for cannabis, I think the implications are clear.

Any one of those is a huge industry by itself. Combined, we’re talking about the emergence of a new global market that will easily be larger than alcohol and tobacco. It could even become larger than the soft drinks industry.

Legal cannabis will create countless new categories of products. Their combined markets will easily be worth hundreds of billions of dollars in the years ahead.

It’s hard to wrap your mind around the enormity of the impact legal cannabis will have on the world. It’s a truly unprecedented situation.

It’s exponentially more profound than the repeal of alcohol prohibition in 1933. Remember, alcohol use was mostly just recreational. Cannabis has a lot more going on.

That’s why I think the legal cannabis megatrend is closer to its beginning than its end.

It will be years before the various cannabis sub-industries – recreational, medical, industrial, therapeutic, and accessory – are fully developed.

The federal legalization of cannabis in the US will be the turning point for this global industry. I think it could happen before the election on November 3 – which is a lot sooner than most people realize.

This is a long-term story that will culminate in the global legalization of cannabis and the emergence of new industries worth hundreds of billions of dollars. It will make investors in the right companies rich in the process, too.

Today, we have the chance to buy the future giants of cannabis before they emerge as industry dominators.

We want to own the future Amazon, Microsoft, Apple, Adobe, and Nvidia of the cannabis industry and avoid the numerous losers.

It’s my job to find those for you.

P.S. My Crisis Investing portfolio has a number of these future industry dominators. And we just did a deep-dive issue into each company that I believe will become cannabis blue chips.

Subscribers can catch up right here. And if you’re not a subscriber, but you’re interested in owning the future Amazons, Apples, and Microsofts of cannabis… go here.