And yesterday morning, I told you about how I run a “barbell strategy” with my personal assets to do just that.

It’s all about balancing real wealth and speculations. And today, I’ll give you a smart bet to put on the “real wealth” side of your barbell.

But before we get to that, I’ve spent a year developing a strategy to use on the “speculation” side of the barbell.

Using what I call “Omega Shares,” we risk just pennies on the dollar to make gains as high as 858%.

In fact, it’s the biggest gain in less than a year from a non-crypto recommendation across Legacy Research Group. (Make sure you read tonight’s Dispatch for more information about that triple-digit winner…)

And tonight at 8 p.m. ET you can join me – for free – to learn how to get in on these gains as well. Make sure to reserve your spot here.

I am very confident about gold right now.

After spending six years in a crippling bear market, gold came to life over the summer.

With little press attention, gold quickly shot from $1,270 in early May to nearly $1,550 in early September. 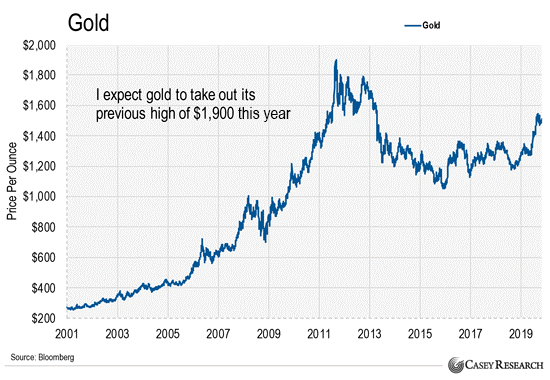 A new bull market is underway… and I don’t see it slowing down anytime soon.

Gold mining stocks – which provide leverage to a rising gold price – will surge. I’ll explain why in more detail below.

But they’re not the only way to profit as this rally gains momentum.

Today, I’ll show you another way to participate in the coming gold boom that involves miners… and can limit your risk…

First, let me break down why the gold mining industry is a good bet right now…

As we say all the time, gold mining is the world’s worst business. It’s capital-intensive. It’s labor-intensive. If a gold mine turns up in a difficult country, its leaders endlessly extort the operators.

So if it’s such a bad business, why would you invest in it?

Because the best feature of gold miners is how they perform when gold surges higher in price.

For example, take gold’s current price of about $1,556 per ounce. Many mining companies do not make money, or barely break even, at that price. However, if the price moves $100 higher, they’ll be in the black. That means a small move higher in gold has the potential to turn a mining firm from a money-loser into a money-maker almost overnight.

Few industries offer that kind of operating leverage. Gold miners are ultra-sensitive to movements in the price of gold. When it moves higher, they surge.

By and large, the gold mining industry hasn’t seen profits for years. That doesn’t get into the industry’s terrible track record of what to do with the profits in those infrequent cases.

After years of this, investors had enough with the industry. The 2013-2019 downturn in gold prices shown in the chart above was the final straw. Companies had little ability to raise money to run the business, much less look for new sources of gold.

That’s a key part of the mining industry. Every ounce mined is one fewer sitting in inventory.

Imagine a shoe store that stopped ordering from its suppliers because its owner ran out of money. He sold existing inventory to pay bills. After a while, shelves get thin. If shoe demand unexpectedly surges, he won’t be ready for it.

Each year, the gold mining industry pulls close to 110 million ounces from the ground. It takes about 10 years to develop a gold mine. The industry, starved for investment capital, has neglected the business of replacing the ounces it pulls from mines each year.

He went on to say:

As the chart below shows, mines currently in production are running out of ore. By 2024, just a few years from now, the 100-plus million ounces produced from existing mines today will fall to fewer than 90 million. 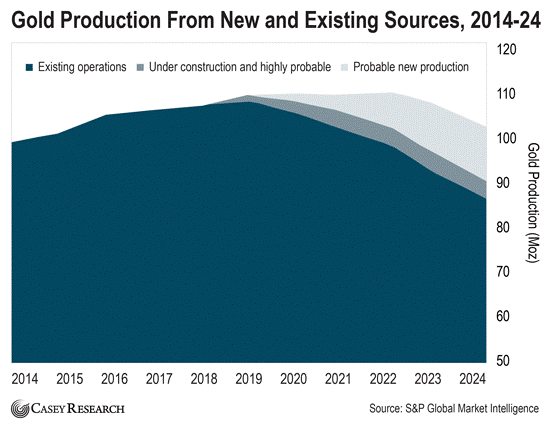 Lassonde goes on to say the industry has not properly invested in replacement supply of mined gold.

This is Economics 101. When supply dwindles at the same time demand surges, you’ve got the makings of a frenzy. Where will new gold supplies come from? It takes a decade to permit and develop a mine.

That could spark a surge in demand for gold. If it does, the gold market – and gold miners – would jump higher quickly. There’s simply not enough supply.

That’s why gold miners are a great option for getting some exposure to the next gold boom. But there’s an even better way to play this trend…

Gold royalty companies have all the upside benefit of mining stocks – without many downside risks.

I know the gold royalty industry inside and out. I have deep connections in the business. As a director on the board of a successful gold royalty company, I know big things are coming for the space.

A gold royalty company doesn’t actually produce any gold. Instead, it lays claim to a small percentage – a royalty – on the gold that gold miners produce.

A gold royalty gives the holder a small percentage, usually 1-2%, of all the gold ever produced from a mine. The royalty has a few very important features.

A royalty covers future discoveries of gold on a property. Most mines go on producing far longer than planned. Once the operator is 2,000 meters and $1 billion into a project, it’s reluctant to leave. Usually, it spends money drilling looking for more gold at the bottom of the mine. The operator often finds it. The royalty holder gets 1% of that, too.

A royalty owner doesn’t care if a mining company endlessly issues stock diluting its shareholders. This happens all the time in the mining business. Operators never seem to make money and never run their companies properly over the long term.

But the royalty cannot be diluted. 1% is always 1% from now until the end of time.

Meanwhile, the royalty holder’s cost didn’t change. The day it bought the royalty was the last dollar it paid the mining company, even if that was 20 years ago.

As you can see, the royalty business has many advantages compared to actually mining gold.

You can get started today by looking into shares of Franco-Nevada (FNV). It’s the largest company in the sector and one of the safest ways to take advantage of the coming boom.

P.S. Make sure you reserve your spot to join me at 8 p.m. ET tonight to learn how to make triple- and quadruple-digit gains.