In fact, as you’ll see, this could be their biggest rally in 50 years… and now is the time to take advantage.

Read on to get all the details, including a “one-click” way to get exposure today.

It’s the most important chart in the resource space today…

And it’s telling us that commodities are primed for their biggest rally of the last 50 years.

Why is this the best setup for commodities in half a century?

• Take a look below…

The chart I’m referring to tracks the S&P GSCI – which tracks prices for 24 commonly traded commodities – relative to the S&P 500. We’ve labeled a few important events on it… 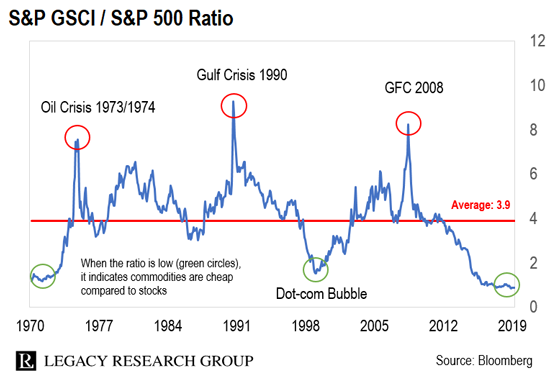 As you can see, when commodities are at historic lows relative to stocks [green circles on the chart], it’s been a great time to buy.

• The opposite is true, too…

History shows you don’t want to be loading up on commodities when they’re expensive relative to stocks.

For instance, the S&P GSCI was at an extreme high relative to stocks [red circles on the chart] in 1990, at the peak of the Gulf Crisis, when Saddam Hussein’s army was rolling into neighboring Kuwait. That was a terrible time to be a commodities buyer. The S&P GSCI plunged 70% from the end of September 1990 to December 1998.

Another peak for commodities relative to stocks was in 2008, at the start of the global financial crisis. And again, that was a terrible time to buy commodities. From July 2008 to February 2009, the S&P GSCI experienced a 65% peak-to-trough fall.

• If past is prologue, that means commodities are primed for another explosive bull run…

In other words, the commodities sector is currently 77% below its average price relationship with stocks over the past half-century. And it’s lower, on a relative basis, than it was ahead of the big commodities rallies in the early 1970s and the early 2000s.

There are lots of other considerations when it comes to buying natural resources.

But if you filter out the noise… and just buy when commodities are historically cheap relative to stocks… you’ll do very well indeed.

An easy, “one-click” way to get exposure today is to buy the Invesco DB Commodity Index Tracking Fund (DBC).

It gives you exposure to the 14 most heavily traded commodities.

You only need to invest a little bit of money to take advantage of this historic setup.

Justin’s note: If you haven’t yet, I recommend you watch Dave’s urgent video presentation. As he’ll show you, a radical new technology is about to take down the world leader of electric vehicles… and flood one tiny, specific stock with a massive windfall starting any day now. Go here to get all the details.

Are you investing in the commodities sector today? Which specific metals are you betting on? Let us know how it’s going at [email protected].