This action sent Britain’s borrowing costs to its highest level in decades, while the pound fell to a record low.

Consequently, Britain’s central bank had to step in to avoid a full-blown financial crisis. While this helped calm things down, investor confidence remains shaken.

Now, Teeka will tackle the following question: what does this mean for America and the Federal Reserve?

Read on to find out…

Last week, the Bank of England (BoE) made one of the most dramatic pivots I’ve ever seen.

On September 23, the British government announced a slew of tax cuts designed to stimulate the economy.

It was a bizarre decision. When you’re experiencing out-of-control inflation (inflation is at a 40-year high in the U.K.), the last thing you want to do is stimulate the economy.

To make matters worse: None of the tax cuts came with corresponding tax increases elsewhere.

That meant the British government was expanding its budget deficit and expecting the bond market to fund it… No questions asked.

The British pound fell as much as 7% following the news. And soaring yields sent the British gilt (government bonds) into a tailspin.

The price of 30-year bonds plunged, extending a decline that’s sent the bonds down by as much as 50% since the start of the year… 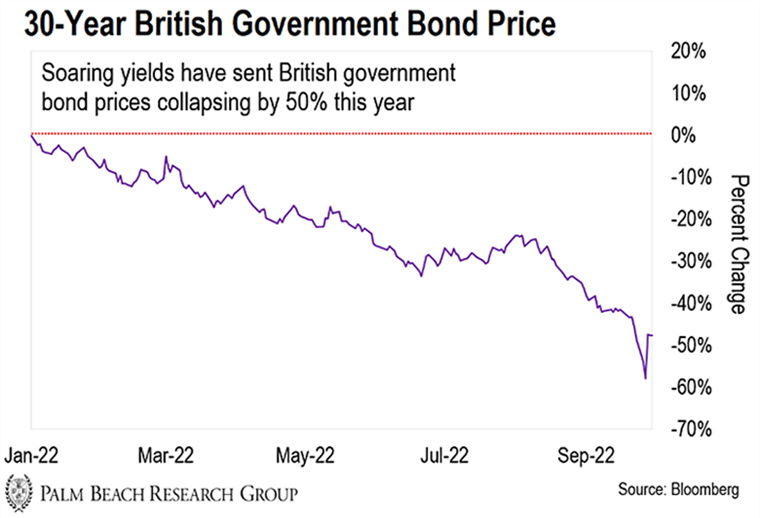 The rout in bond prices and sterling was so bad, the BoE had to reverse its rate-tightening position and flip-flop back to buying bonds in the open market… or risk a complete collapse of the U.K. bond market.

Why did they flip so quickly?

Rumors abound of certain U.K. pension funds on the verge of insolvency because their bonds had dropped in value so much.

Had the BoE not acted, it would now be attempting to stop what could’ve turned into a full-blown financial crisis. Government bonds are the backbone of global finance.

All other assets are priced off their rates.

Trillions of dollars of assets are secured by lines of credit that are themselves secured by government bonds. What happens when those bonds drop 50% in a relatively short period?

You get massive margin calls.

And that is what the BoE was faced with.

The BoE learned first-hand that it can’t lose control over interest rates. If rates start freely trading again, the resulting rate rise will devastate the value of long-term bonds.

And that would precipitate a massive liquidity crisis.

I don’t envy British policymakers. It’s going to be a tough road for them and British citizens.

The lightning-quick reversal by the BoE has many investors here in the United States wondering if the Federal Reserve will make a similar pivot.

The Bank of England Just Blinked – Is the Fed Next?

I don’t believe so.

The U.S. is in a very different position than the U.K. Despite the market sell-off, our economy is still booming. The world is rushing to buy as many U.S. dollars and dollar-denominated assets as it can.

This will give the Fed the room it needs to jack up rates even higher to slow down the economy… which it believes is the only way to rein in inflation.

So how high can U.S. rates go?

Let’s be conservative and say he won’t stop until 5%.

A 5% Fed Funds rate will be the highest level we have seen since 2007. There’s no question in my mind that rates that high will slow down the U.S. economy dramatically.

It’s going to be difficult (but not impossible) for him to go much higher than 5% because of the levels of federal debt.

If Powell jacks up rates higher than that, the interest payments alone will bankrupt the U.S. government… So he only has so much room to maneuver.

Now theoretically he can take rates to wherever he wants… and simply print more money to fund the government through purchases of U.S. bonds.

As to the interest owed, he can take an IOU from the federal government or immediately refund the interest back to the U.S. Treasury.

To be clear: I don’t think we’re quite there yet. But it’s an option for Powell.

If this sounds like some Banana Republic financial voodoo, you are 100% correct.

But it doesn’t mean it can’t happen. Just look at The Bank of Japan (BoJ). It owns 50% of all outstanding Japanese government bonds.

If that sounds like a Ponzi scheme… it’s because it is.

Virtually all central banks are doing this. The only reason it works is because we collectively turn a blind eye to it.

There will be a day when the world will refuse to go along with this charade. When that happens, you’ll be very glad you own assets like bitcoin… But that’s an essay for another day.

Where Will Things Go From Here?

The only reason the Fed is raising rates now is that inflation has gotten out of control. It can’t stand by as inflation ravages the country.

Unlike in 1980, however, Powell can’t crank up rates to 20% to kill inflation. As I explained above, the national debt is too large to take rates that high.

So we don’t have to worry about rates going into the teens. But you do need to prepare yourself for the likely outcome of 5% interest rates by the end of the year.

That will continue to put pressure on stocks, cryptos, and real estate.

The thing to remember is that this is temporary. The Fed will pivot at some point in 2023. And that will ignite a powerful rally.

Our job between now and then is to identify and buy great assets trading at ridiculously low prices.

Bear markets are when you pull out your shopping list. The key to remember is this particular bear market is temporary.

We’re in a secular (long-term) bull market. Right now, we are caught in a cyclical (short-term) bear market within an over multi-decade secular bull market.

That was a huge mistake millions of people made. I was one of them.

Learn from my mistakes. Greet this bear market for what it is: An opportunity to buy amazing assets at far reduced prices.

Remember: This bear market is here for your benefit. Because when the Fed pivots – and it’s sure to do so – asset prices are going to explode to new all-time highs.

Investors who buy high-quality assets during this market sell-off will reap the massive rewards that accrue to those who can be patient and cool-headed under pressure.