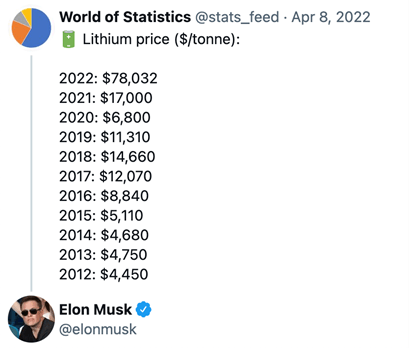 Musk honed in on lithium prices… which have gone up exponentially this year. Rising electric vehicle (EV) demand pushed them to new highs.

He then called the jump in lithium hard tech “insane.” Musk further said, “There is no shortage of the element itself, as lithium is almost everywhere on Earth, but pace of extraction/refinement is slow.”

Now, he’s going to do something about it.

“Tesla might actually have to get into the mining & refining directly at scale,” Musk wrote.

This isn’t the first time that rumors spread about Tesla becoming a mining company. In the past, Musk hinted he was working on new technology for extracting lithium in Nevada.

But this is the first time Musk himself mentioned entering the mining business.

Previously, he’s called out miners. When nickel prices exploded, he said Tesla would award a huge contract to anyone delivering a clean and reliable supply of this hard tech.

Apparently, he’s tired of waiting. He may just go ahead and do it himself.

That’s a huge development for hard tech investors. If Tesla puts its hand on mining projects, that will impact valuations on a massive scale.

Tesla itself trades at a premium valuation. The company’s profit-to-earnings (P/E) ratio sits above 200x.

That’s the reason the company commands a $1 trillion market capitalization. Investors place a high value on the firm. So much, they’re willing to pay $200 for every $1 of earnings Tesla makes.

When Tesla gets involved with mining projects, it can pass on that premium valuation.

We saw this already. In late 2020, Tesla struck a deal with public lithium miner Piedmont. At the time, that company traded below $6 per share.

What happened immediately after was one of the most unbelievable stock market runs of recent history. With Tesla’s backing, Piedmont ran from below $6 to nearly $89 per share. 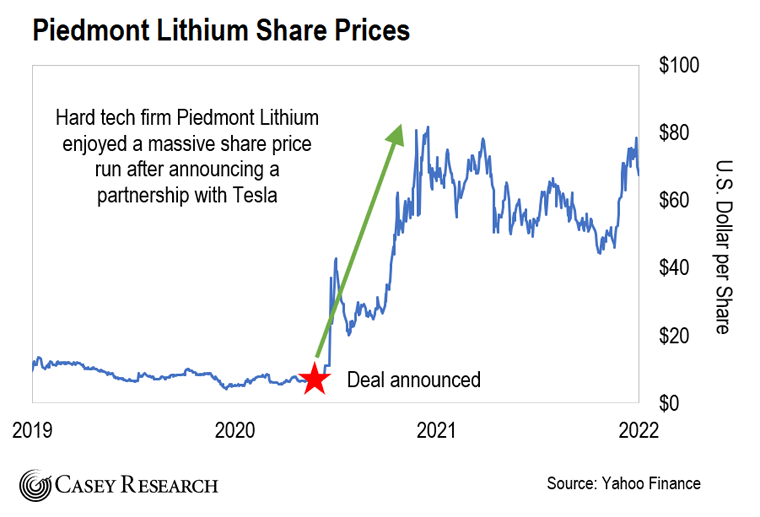 Those are extraordinary gains.

And this run happened quickly, within a matter of a few months…

What a Tesla Partnership With Mining Firms Means

Could we see that again now?

With Tesla eying an entry into mining, the easiest approach would be partnering with existing firms.

It takes time to find a good hard tech project. There are few places on Earth endowed with rich lithium resources.

There are fewer located in development-friendly spots. Serbia, for example, holds a massive lithium reserve. But that project’s been completely shut down after protests from local residents.

Tesla could start from scratch. It could send its engineers to look for completely new reserves of lithium. It could even hire geologists to walk prospective grounds.

But that’s going to take time. Discovering a new mine is a slow process.

Time isn’t on Tesla’s side right now. The lithium price continues to explode as demand from EV firms rises.

So the easiest way to do that is by partnering with existing mining companies.

Like Piedmont, there are several firms already holding areas rich in lithium. These companies are ahead in the game. They’re the shortest path for Tesla to get into the mining business.

That could take several forms.

In Piedmont’s case, it was simply a purchase agreement. Tesla struck a deal to buy supply from the company’s mines in North Carolina.

This is similar to nickel deals Tesla recently secured… where it agreed to buy nickel from eastern Canada.

But Elon Musk’s tweets suggest Tesla might go deeper. It could start partnering with mining companies.

Tesla is a tech giant. According to Musk, it’s developed its own processes and equipment for extracting hard tech like lithium.

If Tesla finds a company with a good deposit, it could unleash its tech arsenal – helping supercharge supply from the project.

If that happens, the gains might be even bigger than we saw with Piedmont. Tiny mining companies could suddenly become the biggest stories in the tech world.

Finding these tiny companies is the focus of my International Speculator advisory. I look for stocks that can gain 10x on big moves like a Tesla deal.

I think the gains could be even bigger in this case… for the right companies.

But for investors who want general exposure to the rising lithium market, the Global X Lithium & Battery Tech ETF (LIT) is a starting kit for the space.

Make sure you watch this sector. Elon Musk and hard tech are going to be explosive.

P.S. If you want to learn more about the best tech metal picks… as well as how to play the chip shortage and EV industry… check out my briefing here.

I’ll show you how to act quickly and position yourself for a 10x gain.