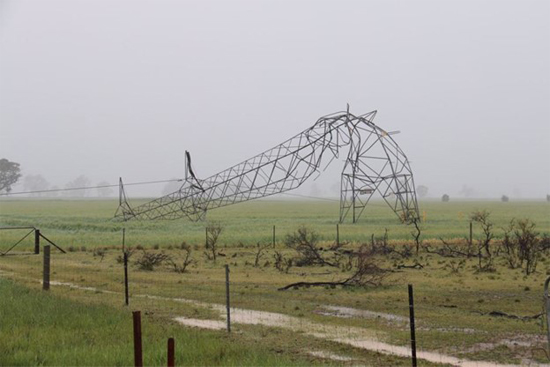 The knocked-out towers triggered safety switches, which in turn shut off the entire electricity grid in South Australia. Over 800,000 people lost power.

The damage was extensive. And permanent repairs were expected to take months.

But then, an eccentric billionaire stepped in…

An Ambitious Plan to Save Australia From Blackouts

He offered to use a new technology to store energy from the country’s power grid, so that energy could be used even during a grid outage… which would help prevent future blackouts.

And, even though the project was worth about $25 million, Musk said if he failed to deliver in time, he wouldn’t charge Australia a penny.

The plan worked. Elon Musk’s Tesla installed its Powerwall battery storage system, with a capacity of 100 megawatts (MW), in 100 days. That’s enough to power about 36,000 homes during an outage.

As agreed, Tesla got paid about $25 million for the project.

But making a profit wasn’t really the point. In fact, this project was most likely not a profitable one for Tesla by design.

The point was to show that mass-scale battery storage can save energy grids vulnerable to blackouts. And it’s already done so several times.

Since Tesla’s Powerwall-based system went online in Australia in 2018, it’s propped up the grid during outages in August 2018, November 2019, and January 2020.

In other words, Tesla’s battery works. And it works well – with any kind of power system, whether it’s traditional, like coal or gas, or renewable, like solar.

After these successes, the government of South Australia commissioned Tesla to expand the battery’s capacity by 50%, from 100 MW to 150 MW.

And this is only the beginning.

More Projects in the Works – And There’s No Turning Back

Neoen, the company that operates Tesla’s grid-scale batteries, is already planning another project in the same storm-battered region, South Australia. And its battery capacity will be 900 MW – six times higher than the one Tesla’s expanding today.

And there are more coming.

There’s a 300 MW battery storage plant being developed in Moss Landing, California. It’s scheduled to be completed by the end of this year.

Florida Power & Light – the largest energy company in the U.S., powering over 5 million households – plans to put together a 409 MW battery.

And there will be more projects coming online.

These projects help stabilize power grids that are susceptible to widespread outages due to extreme weather – like the South Australia example. This saves time and money that would otherwise go toward costly repairs.

But there’s another reason we’ll need more energy-storing batteries. And there’s no turning back…

The world is moving toward renewable, or “green,” energy. By 2040, 45% of global electricity generation is expected to come from renewables.

Two major sources of clean energy, wind and solar, are cyclical. That means they don’t actively produce energy all the time. Only when the sun is shining, or the wind is blowing.

That’s where these energy-storing batteries become a necessity.

They store energy produced from solar panels and wind turbines… to power homes even when it’s dark out, or there’s no wind.

The best part is, these batteries also add stability to traditional grids – like those currently powered by coal or gas.

So as the world goes green, these battery projects already underway won’t need to be updated or become obsolete. And in the meantime, they can be used to stabilize the grids we already have in place.

And this is fantastic news for one industry in particular…

A Shot in the Arm for Lithium

Lithium is a key ingredient used to manufacture these batteries. Put simply, the lithium industry will need to work hard to meet demand.

Think about all the batteries that will need to be installed across the world.

The capacity of all existing projects is equal to about half a billion iPhones’ worth of batteries. That’s almost one half of all iPhones ever sold since 2007.

That’s a lot of energy – and that’s just for power grid storage.

Lithium is also needed in batteries for medical equipment, new smartphones and laptops, and of course, electric vehicles (EVs).

By 2027, the amount of lithium needed to power EVs alone will be five times higher than the amount produced in 2019.

Adding power grid storage demand to the mix could bring that multiple to 10x.

And companies like Tesla understand that. It’s already signaled that it’s open to moving into lithium mining. My colleague Dave Forest wrote about it recently:

All the fears of Tesla “going it alone” in lithium mining vanished. The deal made it clear it intends to buy lithium from other companies. Lithium stocks jumped on the news.

One way or another, the world is hungry for lithium. Which is great for lithium producers – especially ones based in the U.S.

Tesla, for example, a U.S.-based company, will need more lithium supply as American utilities add massive batteries to their grid infrastructure. And though Tesla is the biggest name, it won’t be the only company in the space needing lithium.

This will be like a shot in the arm for the lithium industry. And now’s the time to get in.

Consider adding shares of the Global X Lithium & Battery Tech ETF (LIT). It holds a basket of companies involved in lithium mining, refining, and battery production. And it should do well with the coming lithium boom.

P.S. Regular readers know my colleague, Dave Forest, has boots on the ground all over the world.

Though the COVID-19 pandemic has Dave stuck behind the Canadian border right now, his team is still fanned out… looking for the biggest breakthroughs…

Recently, one of his analysts visited a remote desert. What he found there was shocking. It’s a $35 billion fortune… that could change everything about a key trend I highlighted above. And investors who make the right moves today could see explosive returns…