Justin’s note: Regular readers are familiar with our good friend Teeka Tiwari, one of the world’s most respected cryptocurrency analysts.

Teeka’s been to crypto conferences in New York, Portugal, and London. He’s had dinner with the people who are pioneering this industry. He’s even grilled teams who are developing new cryptocurrencies.

Recently, he was in Tuscany, Italy, where he attended an invitation-only meeting with a small group of prominent players in the blockchain space. In today’s featured interview, he shares the key takeaways from this meeting… including why big money is about to flow into the crypto space…

Nick Rokke, analyst, The Palm Beach Daily: Teeka, you were pretty excited about your recent Tuscany excursion. Can you tell readers about what went on?

Teeka Tiwari, editor, Palm Beach Confidential: I was invited to Tuscany to meet with some of the biggest investors and programmers in the blockchain space. But before we get into the biggest thing I took away, let me set the stage first.

We were in the hills of Tuscany. I would walk out of my room and see rolling hills filled with grape vines. And the meeting was held in a 10th-century castle.

Teeka outside the 10th-century castle where the meeting was held

The castle had massive windows overlooking the valley, which is rare for a castle from that time. But since the walls are made with six feet of solid rock, they could support these windows.

It is hot there this time of year… I’m talking South Florida hot. But it stayed cool inside the walls of the castle. It was the perfect place to hold a low-key meeting and talk about the future of blockchain investing.

Nick: Sounds amazing. Italy is on my top five list of places to visit… So what did you learn at the meeting?

Teeka: I learned a lot there… But the most exciting thing I learned is that pension funds are getting closer to investing in cryptocurrencies.

I met with a guy who managed billions of dollars’ worth of pension fund money. He was making a fortune doing this. But he gave up that cushy job to do something different—to start a fund to help pension plans invest in cryptos.

This sounds crazy to some—pension plans are the most conservative money in the world. People rely on them for their income during retirement.

But pensions will start investing in cryptos. They’re already branching into alternative investments like hedge funds and private equity. They’re performance-chasing—and they have to be. Here’s why…

We’ve warned readers that these pension plans are grossly underfunded—even after one of the longest bull markets in history. I mean, if they’re not fully funded now, when will they be?

According to one report, federal, state, and local employee pension plans have a combined $7 trillion in unfunded liabilities.

They need to get more returns… and one of the few places in the market you can do that right now is in cryptos.

Nick: I’ve done some work with pension funds in the past. And custody—who holds the assets in these plans—is a huge deal.

There’s no way these funds are going to hold onto cryptos if there’s no custody solution for them… Do you see that coming soon?

Teeka: Nick, you’re absolutely right… Custody is a big problem for institutions. You see, institutions can’t own and hold the securities they buy on behalf of clients. A trusted custodian must hold the assets for them, minimizing the risk of theft or loss of assets.

And that’s what this guy I met is going to remedy. He’s going to create what’s called a “fund of funds.” A fund of funds is a hedge fund that invests in other hedge funds.

This may sound minor, but it’s not. A pension can invest in a crypto fund of funds because then, it will just own shares in other hedge funds. It won’t directly invest in cryptos.

This guy is just one of about 100 people starting these crypto funds of funds.

Funds of funds are nothing new. They’ve been around for a couple of decades. But a crypto fund of funds will allow billions of dollars of pension fund money to flow into the space.

And a good portion of this money will flow into the crypto coin market. These funds will gear toward certain cryptos that appeal to institutions—projects that have highly credible teams that are solving big problems.

These are exactly the types of projects I’ve been recommending to my subscribers for almost three years. And despite the recent pullback, we’re up an average of 728.6%. Once pension fund money comes in, I expect those returns to skyrocket even more.

Now obviously, bitcoin will get a lot of attention from these types of funds. But there are many other cryptos that will attract pension fund money.

Nick: Thanks for giving us a peek into your insider network, Teeka.

As you can imagine, we were overwhelmed with questions—over 16,000 from across the world.

Due to the demand, Teeka has agreed to do a live follow-up Q&A briefing tonight at 8 p.m. ET.

There’s still time to sign up. You can submit your questions and register for this free briefing right here…

Today, another reader writes in with his thoughts on our Friday mailbag, where we addressed our recent essay on Tesla…

Regardless of what ultimately happens with Tesla, I did want to come to your defense because you were quite clear that Tesla was a stock to be “avoided,” and it is quite clear to me that “avoided” doesn’t mean “shorted.” Tesla is very difficult to short because the borrow fees are high and the cost of put contracts is similarly high.

I really value your research and opinions, but when it comes time to place the order, I hold myself and myself only, fully accountable. Blaming you for something you said not to do is just pathetic and illustrates the broader societal problem we have with personal responsibility.

And this reader enjoyed International Speculator editor Dave Forest’s recent essay on nickel… and why it needs to be on your radar today.

Great article on nickel, and I completely agree with your perspectives. Sulfide nickel is incredibly hard to find, as the intrusions are typically small, but when you do find one and if the tenor of the sulfide is high, they can be extremely valuable.

The White House just confirmed a major story that’s about to change everything. …

It all has to do with President Trump’s executive order that’s about to unleash a nationwide hunt for “Brandt Oil”—a new oil grade set to replace Brent Crude.

Just how powerful is this super fuel? Less than the equivalent of two gallons’ worth of “Brandt Oil” contains enough raw energy to power your house for nine years…

A single barrel’s worth could soon be capable of unleashing more than enough energy to power 20,000 homes for a decade… 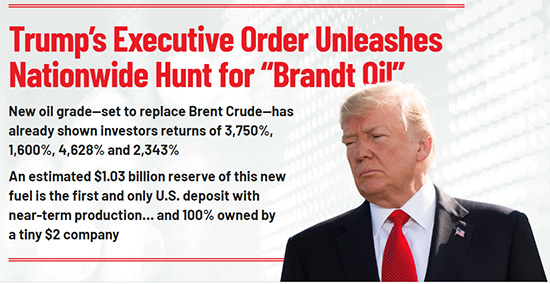