This week, Apple released the latest version of its top-selling phone, the iPhone 13. And according to investment research firm Wedbush, 250 million iPhone users worldwide are ready to upgrade to the new model.

There’s no doubt the iPhone is a wonderful success story.

But as great as that success story is, Jeff Brown believes there’s an even bigger story coming from Apple. One that will create a way for investors to profit from a $12.3 trillion tech investment opportunity.

Perhaps you can see why we’re so keen to share this story with our readers.

Wearing his signature jeans and black turtleneck, Apple cofounder Steve Jobs walked on stage in front of a crowded audience. It was Apple’s 2007 Macworld conference.

Addressing the audience, Jobs said he was going to reveal a “revolutionary and magical product that is literally five years ahead of any other mobile phone.” That device was – of course – the original iPhone.

The iPhone went on sale in June of that year. In the first weekend alone, as many as 700,000 iPhones were sold to eager customers. By the end of 2007, 1.4 million iPhones were bought worldwide. Time declared it the invention of the year.

In hindsight, it’s easy to recognize the significance of this event. The iPhone is arguably the most iconic consumer electronics product in history. Today, 47% of all smartphone users in the United States use an Apple iPhone.

And it’s the iPhone – more than any other Apple product – that is chiefly responsible for Apple becoming one of the most valuable public companies in the world, with a market capitalization above $2 trillion.

And, of course, investors in Apple have made incredible returns. Any investor who bought shares in Apple (AAPL) the month that Jobs revealed the original iPhone is now sitting on returns in excess of 5,000% as of writing. 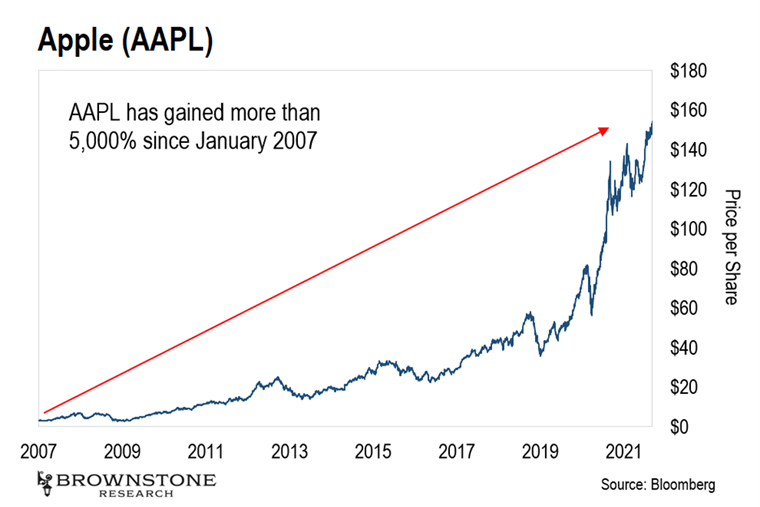 But investing in Apple was not the only way to gain exposure to the revolutionary trends that the iPhone unlocked. The iPhone’s incredible success had “knock-on” effects for other technology products and services.

In fact, Apple has kickstarted a number of major tech trends that have made people rich…

A perfect illustration of Apple’s influence is the App Store. While Apple didn’t invent the concept, the richness of its platform popularized many services that we enjoy today. From its launch in 2008 with merely 500 apps, the App Store has grown to more than 2.2 million apps to date.

One company that benefited from this new “mobile-first” trend is Zynga (ZNGA). Zynga was founded in April 2007, only a few months after the reveal of the original iPhone. Most of us probably know Zynga as the company behind the popular mobile game “Words with Friends.”

Today, the company is one of the top mobile gaming companies in the world. During its Series A round in January 2008, Zynga was valued at just $17 million. Now, as a public company, Zynga boasts an enterprise valuation of $8.3 billion as of this writing. That represents a return of 48,700% for private investors who have held on since the Series A round.

Or consider Facebook. We might not think of Facebook as a company that benefited from the creation of the iPhone. But we may be surprised to learn 79% of Facebook users interact with Facebook products exclusively through their mobile phones. And 75% of Facebook’s traffic and revenue come from mobile phones.

Were it not for the iPhone – and the subsequent smartphones it inspired – Facebook would be a fraction of the company it is today.

Likewise, half of all users of Spotify – the popular music streaming service – are “mobile only.” And 25% of all Amazon Prime orders originate from its mobile app.

In fact, a number of popular companies have benefited as a result of the iPhone’s success.

I’d be willing to bet that anyone using an iPhone is using at least one of the services pictured – probably several of them. Each of those businesses is worth billions of dollars. Some are worth hundreds of billions.

Mobile devices like the iPhone (combined with 4G mobile bandwidth) made all of these companies what they are today. Needless to say, this presented some of the best investing opportunities of the last decade.

And Apple’s influence doesn’t stop there…

Just like with its App Store, Apple’s success creates a ripple effect for new technologies, bringing them to mainstream attention. And with the release of its 5G-enabled iPhone last year, for example, we’re seeing a wave of companies benefit as a result.

For example, the success of Apple’s 5G iPhone (among other devices) cascades down to the manufacturers – like semiconductor companies – as well as companies building new apps using 5G technology.

In fact, we’ve profited off several of Apple’s suppliers in my research services. We’re currently up 49% on one key Apple supplier, and we’re up 41% and 108% on other manufacturing companies benefiting from Apple’s influence. That’s one reason why whenever Apple makes a big move, we make sure to pay attention.

And that’s the important message I have for readers today… It’s time to get ready.

I see a situation unfolding with Apple that will lead to the next round of “knock-on” effects… and the next big opportunity for us to profit.

You see, Apple just revealed its next big launch. And I believe as much as $12.3 trillion could be at stake as this new trend takes hold.

That’s why tonight at 8 p.m. ET, I’m going live to share the details on Apple’s big announcement – and what’s coming next. As I’ll explain, this is a potentially life changing opportunity… And right now is the perfect time for investors to get in position…

So if you’d like to tune in and learn the latest… please go here to RSVP for this exclusive event.