Rachel’s note: This week, we bring you an essay from longtime Casey Research friend Jeff Brown.

Jeff has been in the tech space for more than three decades. He’s an expert at identifying and profiting from some of the greatest tech advances of our time – including cryptocurrencies.

And now that bitcoin and other digital assets have been established as legitimate investments, he’s ready to unveil the most important project of his career.

Jeff has spent five years developing it. It’s a way to potentially make six figures in the crypto market – in 60 days or less… regardless of any potential down markets.

On Wednesday, March 16 at 8 p.m. ET, he will reveal all the details at a special online event. You can reserve your spot right now… then read on below for more about crypto’s next big investment opportunity…

When we get in on the ground floor of a major investment trend, we have the chance to build generational wealth.

I first profiled bitcoin in 2015 when it was trading near $240. Keep in mind that bitcoin was seen as a risky asset at the time.

JPMorgan CEO Jamie Dimon even said, “If you’re stupid enough to buy it, you’ll pay the price for it one day.”

But I saw a decentralized, permissionless asset supported by a radical new technology. I knew it would change our entire monetary system as we know it.

I’m sure we know what happened next… 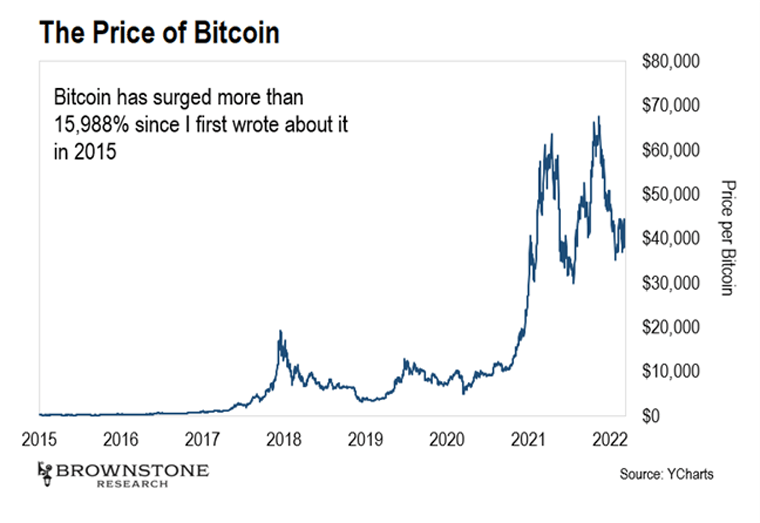 Bitcoin and other digital assets are now regarded as legitimate investments. There are now several bitcoin exchange-traded funds (ETFs). And the asset is held on the balance sheets of major companies like Tesla, MicroStrategy, and Square (now called “Block”).

We’ve also seen an incredible proliferation of accounts opening up crypto trading to retail investors in the U.S. and around the world. And Coinbase – the world’s largest crypto exchange – went public last year.

Of course, few of us could imagine buying a single bitcoin at $40,000 today. Early investors who grabbed it at $240 were able to build their stake before the big run-up.

Bitcoin’s exponential climb higher was a once-in-a-generation opportunity. Yet many of us missed out on it.

That said, we can still find big opportunities amid the current crypto pullback…

In November 2021, bitcoin traded for close to $70,000… Now it’s down almost 40% from its highest point late last year. Ethereum also hit its lowest level since August 2021 with the crypto pullback early this year.

And it’s the same story with many other cryptos. But there’s some nuance here…

We’ve seen marked volatility across the broader market as investors worry about inflation, rising interest rates, and the recent geopolitical events between Russia and the Ukraine.

All of these things are stoking the volatility we’re seeing. And one of the important factors relating to this volatility is the Federal Reserve’s next move regarding interest rates.

Whenever the Fed raises rates, it effectively makes money more costly. The higher rates ripple into the lending and credit markets. For example, growth stocks, which often depend on debt to fund their growth, suddenly see their margins eaten away.

As a result, when money isn’t as “cheap,” riskier assets tend to sell off. And because many investors view digital assets as riskier investments, rising rates impact their performance.

Yet… this is a short-term effect.

As long as the Federal Reserve doesn’t aggressively hike rates several times in 2022, we’re in for another great year with cryptocurrencies. And I just don’t see the Fed doing that with the mid-term elections coming up, especially with the Russia-Ukraine conflict giving it cover to not raise rates.

There will probably be a modest 25 basis point increase this month. I doubt we’ll see much else this year.

If we do, it would only be another 25 basis points. That’s really nothing. Interest rates would still be well below 1%. It’s pretty much the same as free money.

Not only is the market overreacting to the thought of higher rates… but it’s losing sight of the long-term growth coming.

We just need to consider the massive capital flows entering the crypto markets this year. That’s our best indication of the underlying health of the digital asset space:

Mark my words… this down market for cryptos won’t last.

And contrary to the fear in the markets, digital assets are still great for investors to maintain exposure to right now…

I believe cryptos like bitcoin will run higher this year. I’ve even predicted that bitcoin could hit $100,000.

Yet investors won’t find returns in the thousands of percent there… The biggest gains will no longer be in bitcoin.

We need to look elsewhere to truly build generational wealth…

So where is the opportunity for early investors to stake their claim in the next bitcoin or ether?

There’s a pattern in the crypto markets… a 60-day window that can bring investors as much as six figures.

And I’ve been developing a system that can track these windows… and help us make the best trades. It’s so powerful, I’ve even submitted this technology for a patent…

And on March 16 at 8 p.m. ET, I’m unveiling the details about this project. We’re calling the event Jeff Brown’s Secret Project Perceptron.

I want to help readers take advantage of the massive opportunities for crypto investors this year with short-term trades.

So if you’re interested in profiting from crypto, then please sign up to attend this event. I’ll even be giving away a free trade to anyone who tunes in.