Sure, you can make money from mainstream ideas, too.

But if you’re after bigger gains…

You’ve got to take a risk or two.

Right now is the perfect time to do that. And one investing expert has the ideal type of play for the chance to make multi-digit percentage gains.

First, if this is your first time reading the Dispatch, welcome. If you’ve been here before, welcome back.

We do this by showcasing ideas from our in-house investing experts, Dave Forest and Nick Giambruno… And from the founder of our business, Doug Casey.

Today, we’ll look at another way to profit as the market rebounds from the September lows.

What It Means to Be a Contrarian Investor

First up, if you’re new to Casey Research, a quick explanation on what it means to be a “contrarian” investor.

That’s not being a contrarian. (Or it’s not your editor’s definition of a contrarian, anyway.)

Most likely, it means that you’re buying while others aren’t interested in the idea – or haven’t discovered it yet…

The kind of thing that everyone ignores for years… before jumping into it after it takes off.

That’s why we use the Casey “10 x 10” Approach with our contrarian ideas. We look for a diverse range of assets… and then allocate a small amount to each.

We do this because we know that not all contrarian ideas will pay off. In fact, we know most won’t pay off. But those that do can pay off in a big way.

An Attempt to Bring Down “Big Oil”

As regular readers know, Dave is an investing expert with more than two decades of experience in the mining and petroleum industries.

There’s no one we trust more to uncover the best under-the-radar commodities trends – other than perhaps Doug Casey himself.

And not only is Dave’s latest idea contrarian, but it’s also certain to put a few noses out of joint, too.

As Dave wrote in the September issue of his premium Strategic Trader service (paid-up subscribers can catch up here):

You’ve probably heard about ESG [Environment, Social, and Governance] investing. ESG investors see fossil fuels – like oil, gas, and coal – as “dirty” industries. Never mind that without them, our way of life would cease to exist. Everything we do needs energy. And oil and gas are still some of the cheapest and most efficient ways to get it.

Despite this, ESG activism is on the rise. Earlier this year, activist ESG investment group Engine No. 1 shocked the world. It waged a fight to gain seats on oil giant ExxonMobil’s board. It won three out of 12.

What Engine No. 1 wants is to force companies like ExxonMobil to eventually move away from the oil business. It’s all about clean energy and how to transform an oil giant into something completely different. They want to force ExxonMobil to do less of what it’s best at.

On the surface, it seems that way. But the reality is likely different. As Dave went on to note:

This may seem like bad news for [Dave’s recommended stock]. But if there’s anything we know, it’s that when the oil price trends upwards, it always leads to a higher rig count. Which is good for companies like [this stock].

The higher the price of oil, the more rigs in the field to get that oil.

At the end of the day, no matter what good intentions ESG investors like [asset manager] BlackRock and Engine No. 1 may have, they’re going to end up forcing investment into the one thing they want to stop: oil.

As the oil price rises, we wouldn’t be surprised to see money flow into the sector. In the end, profit wins.

We love this idea. And we figure Dave is spot-on with the analysis.

Anytime anyone – whether it’s the government or a regulator – tries to limit the supply of something, it pushes prices higher. Think about the “War on Drugs,” Prohibition, and others.

And that’s good news for the oil sector.

Because as Dave says, the more groups try to limit the supply of oil… the more it will push the oil price higher… which will lead to increased drilling and production… and that will mean more revenue and more profits for companies and shareholders.

The only question left is: How do you take advantage of it?

The Single Best Way to Play This Trend

This is where Dave has used the power of one of his favorite investment types – warrants.

Warrants are perfect for contrarian plays like this. When making contrarian bets, it’s best if you can spread your capital across a wide range of investments and ideas.

Warrants let you do that because you can invest a smaller amount in an idea… yet you still get exposure to the full price move of the underlying stock.

To give you an example, we can look at the performance of one of Dave’s recent winning trades.

In December last year, Dave recommended investors buy warrants in a 5G-related company called Radius Global. The stock was trading for around $11. Today, it trades around $18.

You can see how it has played out on the chart below: 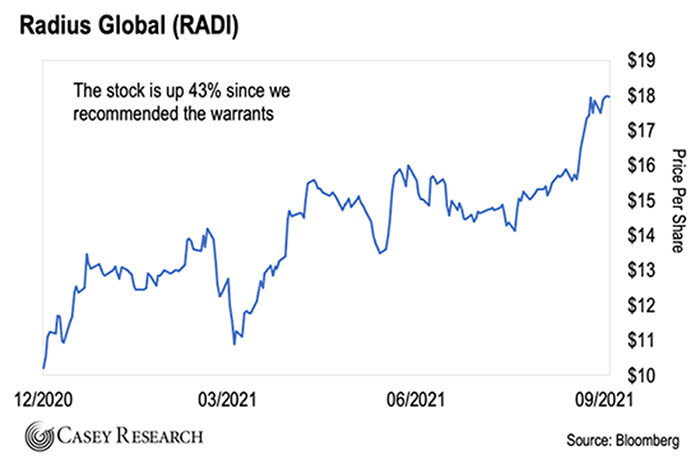 That’s a nice return in less than a year – a 43% gain. But those who invested in Radius’ warrants had the chance to make five times that return.

When Dave recommended the warrant, it was trading for around 70 cents. Today, it trades for over $2. See the chart below: 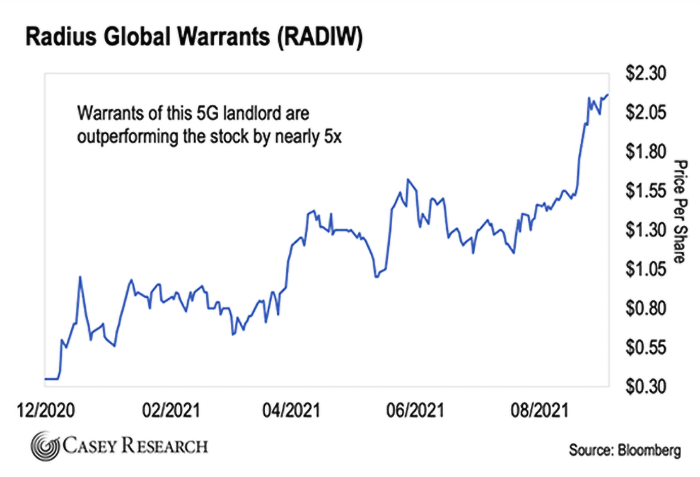 So over the same timeframe, while the stock made investors a 43% return, those who bought the warrant made a 207% return.

It’s why Dave recently told his subscribers to take some money off the table with this trade – enough to cover their initial investment.

It means that now, the rest is effectively “house money.” There’s no risk. Even if the warrant goes to zero, Dave’s readers already had the chance to cash out their initial investment.

This is a great way to play contrarian ideas. And while this example is for a 5G-related company, Dave has open warrants positions to take advantage of the big trend he sees in oil, too.

Already, one of those plays is up 140%. So the idea is already playing out. But he has at least three other plays set to benefit from the same trend. And Dave says big gains are in store there, too.

It’s worth checking out. Remember, whenever governments and pressure groups try to manipulate a market, it always results in unintended consequences.

Today, pressure groups are trying their hardest to destroy the fossil fuel industries. The results of their actions could in fact lead to some of the best profit opportunities in the oil sector that we’ve seen in years.