Something odd is happening in Europe this week.

Sunflowers became the hottest item on the market.

Prices for sunflower oil shot up by over 30% in recent weeks. It’s so bad that British supermarkets now limit the amount of oil you can buy.

It’s not just sunflower oil, either. Across the board, cooking oils exploded in price.

Good old-fashioned inflation is part of the story. Prices for hard assets exploded the last six months after all the COVID money printing around the world.

The War Is Limiting Supply of Oil and Fertilizer

Few investors realize, but both Russia and Ukraine are powerhouses in producing real goods. That includes cooking oils. The two countries together produce as much as 78% of the world’s sunflower oil.

Most of Europe relies on Russian or Ukrainian exports of edible oils. The situation got worse in recent years. New rules on pesticides in the U.K. mean farmers planted fewer oil crops.

The result? Supply is now pinched by the war, and there isn’t much buyers can do.

Supermarket owners say they’re bracing for a hoarding of oils. It’s a crazy situation, one that few saw coming.

But it’s totally logical when you look at the numbers. It’s no secret that Russia and the Ukraine are huge commodities producers.

Just look at a basic good like fertilizer. For potash fertilizer, Russia is the world’s second-largest supplier. Here are the latest numbers from the U.S. Geological Survey. 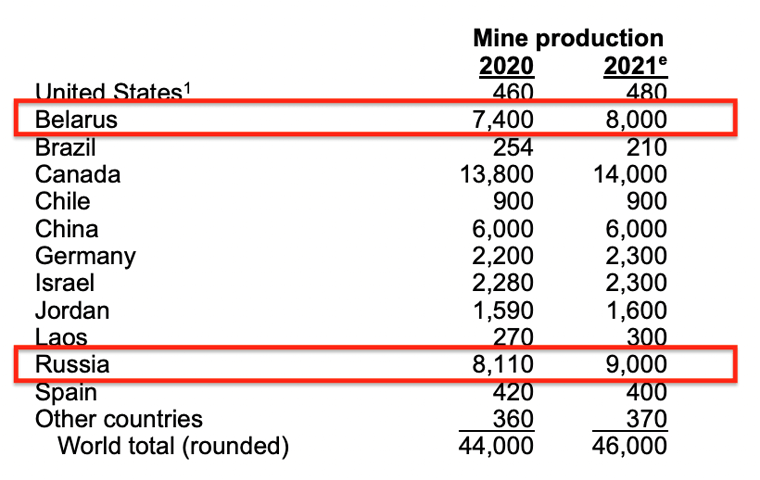 Even worse, the world’s number-three potash fertilizer maker is Belarus. That nation firmly aligned with Russia in recent years. All of this supply is now at risk for Western buyers.

It doesn’t stop there.

The List of Basic Goods in Danger Goes On…

Russia is also one of the world’s biggest suppliers of nickel. It’s no coincidence that electric vehicle (EV) companies like Tesla – who need nickel for every vehicle – went on a buying spree for nickel projects around the world since the Ukraine war started.

They’re all worried about Russian supply drying up. That could cause massive spikes in prices for basic goods. We’ve already seen nickel prices spike 200% in a single day, just after the start of the war.

The Ukraine is a huge exporter of wheat and corn. Before the war, it shipped out 5 million tons of these grains every month. Now, exports are running at just 500,000 tons.

That means 90% of Ukraine’s corn and wheat supply is vaporized. We haven’t heard much about it in the mainstream media yet. But it’s going to be a doozy when supplies run short.

I’ve also talked about Ukraine’s exports of neon gas. That obscure commodity is key in etching chips for electronics. There simply aren’t many other nations that can step in to fill the supply gap.

Copper, palladium, vanadium, silicon… the list of basic goods threatened by the war goes on and on. Those metals power established tech like diesel engines. They’re also critical to cutting-edge industries like EVs and solar power.

Protect Yourself From This Shortage

This is worrisome for our basic quality of life. It’s also concerning for investors… disruptions in these basic goods could implode some of the biggest sectors on the planet.

We’re already seeing that in the automotive business. Nearly every carmaker on the planet delayed shipments lately due to chip shortages, tied back to the Ukraine neon shortage.

That’s a huge loss of profits. It’s only a matter of time till the lack of sales trickles through to financial results for the big auto firms. When the disappointing numbers arrive, we could see a massive selloff.

That’s why I believe every investor should protect themselves… right now. And there’s a simple way to do it.

Invest in the very things threatened by the war.

Investing in nickel, copper, fertilizer, steel, natural gas, and other basic goods is a must. These investments provide a natural hedge against disaster. If the war rages on, these commodities will rise in value, keeping us above the floodwaters.

They’ll also protect wealth if the wider stock market tumbles from war and inflation concerns. At the end of major bull markets, commodities often outperform everything else.

To get ready, I’ve prepared a briefing on everything you need to know to get ahead.

I urge you to have a read and get all the information you can. With a few simple moves, you may come out of this crisis with less stress – and more wealth.