From a ball bouncing up off the floor to an earthquake triggering a tsunami, Newton's third law of motion tells us a lot about how the world works. Most of us can recite the abridged version of the law by heart: Every action has an equal and opposite reaction.

The general principle behind the law also applies to governmental action. When a government taxes wealthy people at an unreasonably high rate (action), wealthy people try to take their money and leave (opposite reaction).

The law also plays out in the market. When the federal government initiated the Troubled Asset Relief Program and began driving interest rates down, interest rates on top-quality CDs and bonds dropped as well, billions of dollars flowed out of fixed-income investments and into the stock market, and bond funds and dividend-paying stocks experienced huge gains.

Casey Research Chief Economist Bud Conrad illustrated this exact action-reaction in the August 2013 issue of The Casey Report, where he compared the dividend yields of stocks with the rate of the 10-year Treasury. 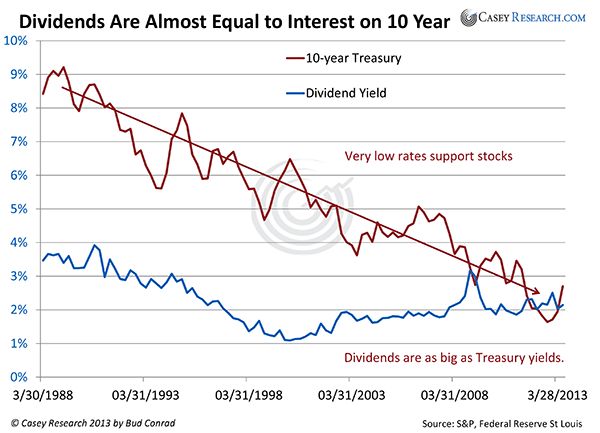 By the end of 2008, the dividend yield on stocks was almost identical to the yield on the 10-year Treasury. While Treasuries are generally considered safe, investors don't want to tie up their money for a decade in an investment yielding less than the inflation rate. Instead, they buy stocks with equivalent dividend yields and the potential to appreciate. And what better place to start than with utility stocks?

Utility stocks are considered safe, face virtually no competition, and pay good dividends. Investors poured money into them over the last five years, and their stock prices surged. The same happened with other large, safe, dividend-paying companies. Frankly, conservative investors had few other places to turn.

Just recently, however, the rates on the 10-year Treasury have bounced off the floor and are moving up—as you can see on the right side of Bud's graph. And according to Bernanke, the Fed may taper the stimulus soon. Bernanke's hinting at a “possible-maybe-kinda-sorta” action made the market react: the stock market took a quick tumble; bonds tumbled; and then the Fed quickly told everyone, “We didn't really mean it.”

Nevertheless, this reaction demonstrates what the market may do when the Fed really does taper the stimulus. With that in mind, our research team took a look at those safe utility stocks to see how they performed from May 2013 to early July 2013: Utility stocks are considered safe in part because of their historically low beta. As a quick refresher, a beta of 1 means a stock historically tracks the market. If the S&P goes up or down 10%, the stock will move 10%. A beta of 0.5 means the stock is less volatile and should only move 5% under the same circumstances.

The red line in the chart above shows the actual performance of the exchange-traded fund Utilities Select Sector SPDR Fund (XLU), which holds a large basket of utility stocks. XLU has a beta of 0.5. The blue line tracks the S&P 500, and the green line shows what XLU should have done according to its historical beta. The difference is no big deal, but it should have followed right along.

Bernanke made his remarks during the week of June 19. Note XLU's coinciding sharp downturn followed by a drop in the S&P 500. After that drop, the Fed made their damage-control statements, the market settled down, and the S&P headed back up.

Also, Treasury rates started to rise on May 1, just as XLU began to drop. We believe that investors have poured so much money into utility stocks that they are now interest-rate sensitive and are trading like bonds.

Newton's third law is at it again. I pity the poor soul who just retired and put a good chunk of his 401(k) in utility stocks on May 1, thinking he would have nothing to worry about.

While we never know for sure what the Fed will do, this is a signal. If interest rates are going up, that impacts how we should invest. Normally when this happens, many billions of dollars flow back in to fixed-income investments, and shrewd investors do two things. First, they identify which investments are the most and the least likely to suffer from the outflow of money. Second, they rethink their bond holdings.

Bonds have had a nice run since the Fed put the brakes on interest rates, but it's time to move on. Anything other than bonds with a very short duration will take a huge hit. Sell them, take the cash, and look for opportunities to profit. Interest rates are likely to rise soon, and we want to protect ourselves… and profit from our foresight.

The day is finally here. Our free webinar, America's Broken Promise: Strategies for a Retirement Worth Living, premieres today at 2 p.m. Eastern. We still have a few spaces available, so jump on the opportunity and sign up if you have not done so already. Oh, and one last thing… a little birdie told me that there are special perks for folks who subscribe to Money Forever after the webinar. I'd say it's well worth clicking here to find out more.

On the Lighter Side

My granddaughter Corrinne turned 30 earlier this week. Happy belated birthday, Corrinne! It's an absolute joy to see a grandchild become a responsible adult. I sure am spoiled, though. The littlest guy is four, so I have 26 years to go with him. I'll cherish every moment.

Our friend Toots shared a little bit of humor this week. I had forgotten that the late Bob Hope lived to be 100. Here are a few of his musings: