It was innocent at first. With a price of $3.30 per barrel at the time of his first trade, Shah dove in, buying an initial five contracts. He added 21 more as the price moved lower. In total, he scooped up $2,400 worth of oil futures in 40 minutes.

Finally, when the price flashed one penny, he went all in, snapping up another 212 contracts. Feeling confident, he shut off his screens and went about his day.

The problem was the price of oil kept slipping. It went to minus $1, then minus $10, eventually settling at negative $37.63.

When Shah realized what happened, he started panicking. He didn’t think the price of oil could go negative. He froze with fear.

Finally, at midnight, he got a call from his broker. What started as $77,000 in his account ended with Shah $9 million in debt. It was devastating.

Shah thought he was getting the deal of a lifetime. Instead, he traded his account into oblivion.

Luckily for Shah, his broker made the decision to refund any amount lost below a price of $0. So while he didn’t end up owing $9 million, it still ended badly for him.

Shah isn’t the only one to play day trader in his spare time. Countless other novices are turning to trading during life under lockdown.

And that should be a warning sign for true investors…

What’s Really Behind This Rebound

Complete novices like Shah are diving into the markets without any prior experience. Many say the historic selloff in March and zero-fee trades drove them to it.

Discount brokers E-Trade, TD Ameritrade, and Schwab all saw record signups in the first three months of the year. Schwab opened a record 609,000 new accounts, almost half of them in March alone.

E-Trade signed up another 531,000 accounts, while TD Ameritrade brought in 608,000 more. Ameritrade even reported net new assets of $45 billion. About 60% of those assets came from retail clients.

Many people are asking where all this money is coming from. It’s simple. According to data analytics firm Yodlee, individuals that received stimulus money look to be putting that money into the stock market.

Just take a look at the chart below. It shows the number of stock positions at Robinhood, a popular trading app. 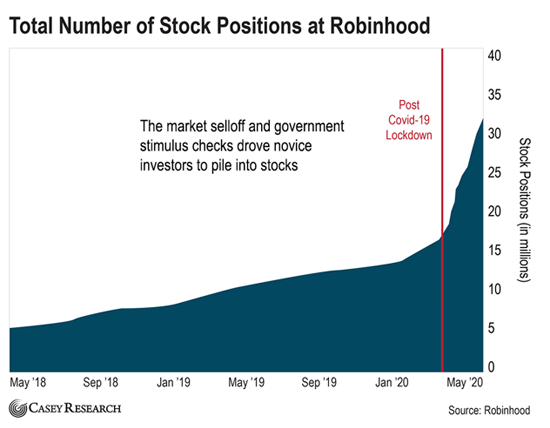 That move post-lockdown tells us a story. It’s one of the main drivers of the current rebound in stocks.

The Greatest Social Experiment in History

Today, the market is detached from reality thanks to all those novice retail investors.

At a P/E of 21 for the S&P 500, the novice investors believe in the recovery narrative and that fundamentals don’t matter. To them, it’s nothing more than a game.

However, the data is saying something different. When the economy is working, companies typically reward shareholders by returning capital to them. This can come in the form of dividends, stock buybacks, or both.

In fact, one of the biggest drivers of the 11-year bull market was stock buybacks:

Since 2012, companies bought back over $4.5 trillion of their own stock. According to Goldman Sachs, corporations were the biggest buyers of stocks over that period. Without them, demand for stocks would have been much lower.

Corporate executives used a mix of corporate profits and cheap debt for buybacks. That’s all but over. Taking on more and more debt to buy back stock seemed like a great idea. Until everything collapsed.

So far this year, about $200 billion worth of buybacks are on hold. That’s about 25% of the total from last year. That may just be a start.

However, companies today aren’t just staying away from buying back stock. They’re also slashing their dividends. Disney. Boeing. Ford… the list goes on.

So far this year, 83 companies have suspended their dividends and another 142 have cut dividends, according to The Wall Street Journal. That’s the highest number since 2009. All these companies are preparing for a 100-year storm. They know they need to stockpile as much cash as possible to survive.

That’s also a major blow to investors looking for stable returns. According to The New York Times, since 1926, dividends accounted for 40% of the total return of the S&P 500 Index. Over the last 30 years, nearly half of stock returns come from reinvesting dividends, according to data from Bloomberg.

We’re in the middle of the greatest social experiment in history. It’s having a devastating effect on the economy, but investors are shrugging it off like nothing’s wrong. Maybe they’re right. Maybe things get back to normal.

However, in order for those expectations to play out, everything needs to be perfect.

That means no job losses. Consumer spending comes roaring back. No second wave of the virus. No more lockdowns, and a vaccine that hits the market by the end of the year.

A Heavy Dose of Reality

While retail investors are piling into stocks with reckless abandon, major investors are not. Hedge funds and corporate investors like Berkshire Hathaway are selling or staying out of the market altogether.

If you ask retail investors why they’re buying today, many of them say they’re bullish because they think everyone is bearish.

At Casey Research, we’re contrarian investors. But when the majority says they’re being contrarian, it’s not contrarian.

Over the next few months, investors will have to come to terms with reality. When jobs don’t come back, consumer spending doesn’t fully recover and a potential vaccine is still out of reach, economic and fundamental realities will start to creep in.

That will surprise investors. Especially novices like Shah. Don’t let it surprise you.

Bear markets have a way of sucking the life out of investors. They pull people back in, making them think they’re missing out.

But many of these new traders have never been through a real bear market. They believe that stocks can only go higher. In the end, they may learn an important and expensive lesson.

As far as what smart investors should do now, we can see what these new investors are buying, which means we know what to stay away from.

Robintrack is a website dedicated to tracking holdings across Robinhood accounts. According to the site, the top five most widely held stocks on Robinhood as we write are: Ford, General Electric, Disney, American Airlines, and Delta Airlines.

Nearly every one of those companies relies on a booming economy to thrive.

For example, think back to the September 11, 2001 attack. Airlines took a crushing blow. It took them six years to return to profitability. It took eight years to recover to pre-attack fares.

Back then, it was fear of a hijacking. Today, it’s fear of an invisible biological terror. This event may be far worse. It may take much longer than six years for people to be comfortable flying again.

So watch out for those companies and similar ones in the same sector. While they may be strong firms, now’s not the time to jump back in with the crowd.

Editor’s note: While most investors today are scooping up shares of blue-chip stocks, if you want to profit in today’s market, you have to dig for the megatrends that are being overlooked by the mainstream – like the coming 5G wireless revolution.

As part of the team at Strategic Investor, John’s discovered a hidden trend that will unlock enormous profits for investors who get in now. It all has to do with the 5G wireless revolution – which can’t happen without a piece of technology called the “Master Key.”

This trend is still flying under every investor’s radar. But that won’t last much longer. Go here to find out more about the life-changing gains you can make from this technology.