John’s been involved in finance for over a decade, including as an equity analyst and a portfolio manager. And he’s worked with E.B. for years, helping him spot the lucrative trends that have given his readers gains of 100%… 173%… and even 837%.

Today, John turns his attention to one of the biggest topics in the news today: the coronavirus outbreak in China. With the panic surrounding the virus growing every day, investors are on edge. But as John will show you below, we’ve seen this before… and there’s more to the story…

China’s coronavirus has the world markets in panic mode.

While the market started to recover some of its losses today, plenty of investors are still spooked… and there could be more volatility on the way in the short term.

It’s understandable if you’re concerned how these events could affect your portfolio. But it’s also important to assess the situation calmly – without giving in to the group hysteria.

As I’ll show you today, this isn’t the first time a virus has sent markets reeling. But there’s more going on here than what the mainstream media is telling you…

The coronavirus, also known as the “Wuhan virus,” has killed more than 360 people. Another 17,000 people are infected, including 11 confirmed cases in the U.S. And last week, the World Health Organization (WHO) even declared the outbreak a global health emergency.

The virus might have originated in a food market in Wuhan, a central Chinese city with around 11 million people. China has put Wuhan and more than a dozen other cities on lockdown, meaning over 50 million people are essentially on house arrest.

Many airlines suspended flights to mainland China. Russia closed its border. This type of isolation grinds an economy nearly to a halt. That spooks financial markets.

But instead of looking at the next fact to panic over, let’s look back at SARS (severe acute respiratory syndrome). It too was a respiratory virus that sent markets reeling.

In 2002 and 2003, the flu-like virus SARS, and a similar condition MERS (Middle East respiratory syndrome), killed about 1,600 people combined. It took governments and health officials close to a year to get the viruses under control.

When the first SARS outbreak was reported, the S&P 500 lost 12% over the following four months. However, by the time the disease was under control, it had rallied back about 25%. You can see this in the chart below. 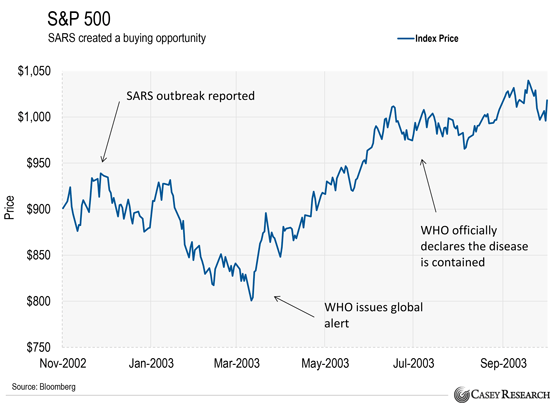 This is similar to what’s happening right now with the Wuhan virus. These episodes tend to create short-term pandemonium. And while they may be worth watching, it doesn’t justify giving in to full-on panic.

Keep in mind that while the virus has killed more than 360 people, the regular flu has claimed many more this year. In the U.S. alone, an estimated 8,200 people have died from the flu this season, including 54 children, according to the Centers for Disease Control.

Of course, we hope officials can contain the spread of the virus and prevent it from taking more lives. But it’s also important to be aware of how this event can affect your holdings.

If the 2% mortality rate holds, expect to see investors come back in full force. In the short term, we could see more market volatility as this plays out. But that shouldn’t scare you out of your positions.

Meanwhile, this most recent episode of panic highlights the benefits of owning gold.

During that 25% advance in gold, the financial press blamed it on Iran, the alleged trade war with China, drama on the U.S. political stage, and now the Wuhan virus. Gold surges on every fear-driven headline right now – and it still gets ignored.

My colleague E.B. Tucker has seen this before. Back in December 2018, he predicted that gold would reach $1,500 an ounce in 2019, even though most financial advisors were bearish on the metal. It reached that mark just eight months later, in August 2019.

Now, E.B. is convinced that gold would likely have to clear its all-time high of $1,900 an ounce in 2011 before the mainstream financial press catches on.

And the best time to latch onto a profitable trend is when no one is paying attention. So consider adding gold to your portfolio today if you haven’t already.

If you’re brand new to gold, you should start with buying physical gold that you can hold in your hand. You can start with common 1-ounce coins like the ones offered here by Gainesville Coins.

We’re still in the early stages for gold.

In fact, you’re arriving at the game in the middle of the first inning… which means there’s still time to get positioned.

Editor’s note: As John said above, gold is a good bet right now… but E.B. has found another opportunity that you can’t miss.

It has to do with “Omega Shares.” They’re not stocks, bonds, or ETFs… They’re an obscure corner of the market that most people don’t know about.

But thanks to these “Omega Shares,” his subscribers are sitting on multiple triple-digit gains in under a year… including an 837% gain.

Now, E.B. is bringing this opportunity to a wider audience.

This Wednesday, February 5 at 8 p.m. ET, he’ll tell you how he finds the best “Omega Shares” with the biggest potential. It’s an event you won’t want to miss… and spaces are limited.