The media hated them.

Big Business, numerous federal agencies, and politicians of all stripes hated them too.

Even Tiffany & Co., the famous jewelry company, vilified them in a full-page advertisement in The New York Times, calling them “unconscionable.”

The villains everyone loved to hate were the Hunt brothers. They were critics of the fiat money system and advocated for hard money based on commodities.

At the time, private ownership of most gold was illegal in the US. So the Hunt brothers turned to the next best thing: silver.

From the late 1970s to 1980, they stockpiled silver. And unlike other investors who settled their silver trades in cash, the Hunts took physical delivery. This often meant flying the silver to Switzerland for storage. 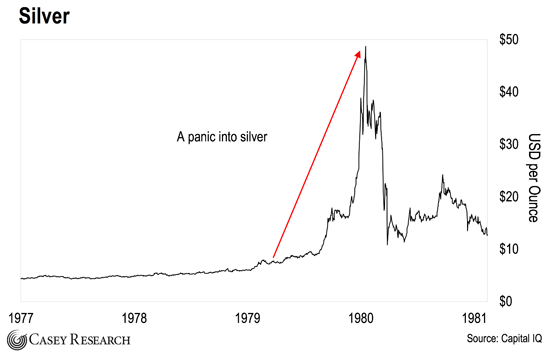 But were the Hunts really the bad guys everyone made them out to be?

They did nothing unethical. They just exchanged US dollars for silver from voluntary sellers. In fact, it was a response to the government’s unethical actions…

Longtime readers will recall President Nixon severed the US dollar’s last link to gold in 1971. Without the discipline of gold, there was nothing to stop the US government from printing as many dollars as it pleased. The dollar was now a purely fiat currency.

The Hunts bought silver because they figured the US government’s actions would lead to inflation. And they were right…

The ’70s saw the highest levels of inflation in living memory – even according to the government’s own crooked statistics. See for yourself: 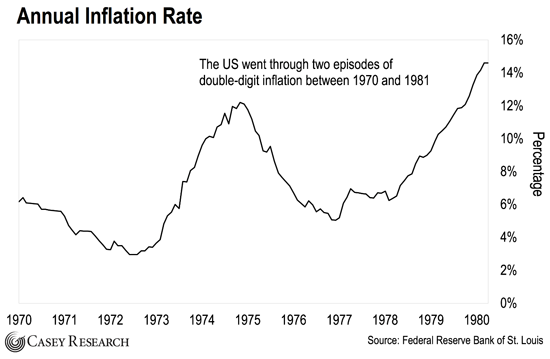 You see, the silver market is tiny. It’s roughly one-tenth the size of the gold market. So it’s prone to crisis-driven upside explosions as money floods into it during periods of high inflation. 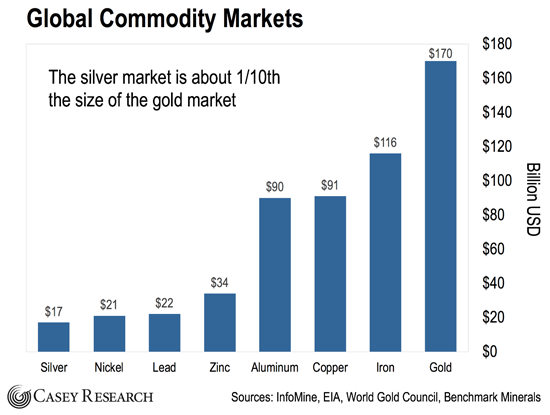 And today, the stage is set for an explosion in inflation. I expect it to kick off a crisis-driven mania into silver like what happened in 1980.

Adjusted for today’s prices, that means silver soaring above $160 an ounce… almost 10 times the current price.

The same kind of wrongheaded domestic and foreign policies that caused the panic into silver in the ’70s and early ’80s are not only present today, but stronger.

Let’s look at domestic ones first.

But runaway deficit spending on welfare and the Vietnam War caused the US government to print more dollars than it could back with gold at the promised price.

By the late ’60s, the number of dollars circulating had drastically increased relative to the amount of gold backing them. This encouraged foreign countries to exchange their dollars for gold, draining the US gold supply at an alarming rate.

To plug the drain, President Nixon severed the dollar’s last link to gold in 1971. Recall this was the event that caused the Hunt brothers to become concerned about the value of the dollar and make their first moves in the silver market.

Today, the financial wastefulness is much worse.

Analysts expect the deficit to hit $1.5 trillion in 2019. And that figure assumes there’s no economic recession.

If there’s even a mild recession, a $2 trillion deficit is a real possibility. (A recession would reduce tax revenue and drive the deficit higher.)

Either way, trillion-dollar deficits are the new normal. That means an avalanche of new government debt to finance them. This will make the federal debt grow faster and faster. Even the government predicts that within 10 years, it will hit nearly $35 trillion, up from $22 trillion today.

Who will buy all this paper? The only entity with the appetite will be the Federal Reserve.

And how does the Federal Reserve pay for the US government debt securities it buys? The only way it can: by creating new currency out of thin air.

This will debase the dollar and lead to runaway inflation.

Once the dollar starts to lose its value in earnest – which I expect could be sometime before the 2020 election – the next “Hunt brothers” will emerge.

As the dollar is debased, people will panic into precious metals… just like they did in the ’70s and ’80s, but likely on a much bigger scale today.

And much of that money will make its way into the tiny silver market. This will cause the price to spike. It’s a predictable pattern…

Bottom line, the stars are aligned for a silver price spike for the record books. And now is the perfect time to get in… 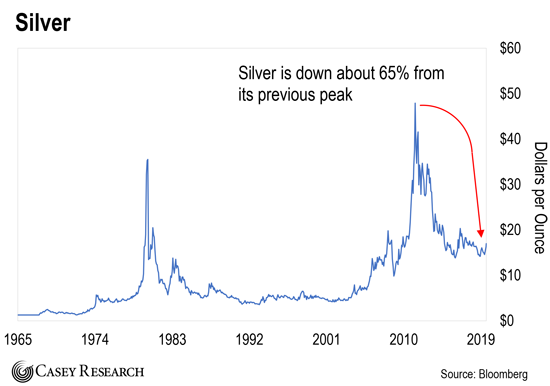 Silver is overdue for a bull market. And as silver prices head higher, select silver mining stocks could offer some of the best crisis investing returns in the months and years ahead.

Chris’ note: As Nick said, owning shares in silver mining companies is a great way to play the coming bull market. Even a small increase in the price of silver can cause shares in these companies to skyrocket.

He calls it the “victory metal.” It helped the US win World War II… and it’s still a crucial element in the military’s weapons today.

But this metal is on the verge of a supply crisis… and when that happens, demand will skyrocket. That means huge gains for investors who get in now.

You can find out more about this once-in-a-generation opportunity right here.