But due to recent COVID lockdowns, he’s stuck behind the Canadian border right now…

Luckily, his team still has boots on the ground all over the world.

One of Dave’s analysts recently visited a remote desert… to get a look at a $35 billion fortune. Silicon Valley is circling this location. And that spells big opportunity for us today.

I used to work a lot on remote oil rig sites. Often, I’d drive several hours into northern Canada to “sit rig” in the middle of nowhere.

There are lots of interesting things about these drilling operations. But one thing that always fascinated me was the “hotshot” business.

In Alberta, there were numerous hotshot companies. It sounds exciting and daring. But actually, it’s mind-numbingly simple.

A hotshot is a person and a truck. When we needed a part for the rig that we didn’t have at the site, we called them to deliver it.

It’s just like UPS. Except hotshots charge 10, or even a hundred, times the price of a normal delivery service.

When an oil rig’s turning, it costs the operator hundreds of thousands of dollars daily. You have a big crew of people, and a bunch of fixed costs.

Imagine then, the rig breaks. The culprit is a busted valve – without it, the rig can’t turn. Suddenly, hundreds of thousands of dollars are evaporating without any results, as things stand idle.

You want to get that replacement valve as fast as humanly possible. So hotshots are on call 24/7. You phone the fellow at 3 a.m., he grabs the part and jumps in his truck. It’s like express service on steroids.

We don’t think about it much, but the same thing happens with the global economy…

Billions of Dollars Hang in the Balance

Now imagine, suddenly your copper supply stops coming. Without that material, there’s no choice but to shut down. At that scale, the losses aren’t hundreds of thousands of dollars – it’s potentially hundreds of millions daily.

It might sound weird saying “emergency” in relation to mining. But it’s not. Billions of dollars of manufacturing depend on supply of mined material.

Many of those products are essential to health and safety. Authorities raised alarms last year over a shortage of the element helium. Helium’s mainly used as a component in medical devices like MRI machines. Without a supply of this raw material, lives could be lost.

Governments globally know this well. Japan – which has little domestic metal supply – is extremely aggressive in funding mineral exploration around the world.

Other countries like South Korea, China, India, and even Abu Dhabi pumped billions into mineral projects around the world. Their common goal is to ensure metal supply to avoid an emergency shutdown of their economies.

America, however, hasn’t followed suit. Over the last 50 years, the U.S. allowed its mining industry to wither.

For example, America used to be a top producer of rare earth metals. But today, the U.S. lags behind while other nations like China are surging. 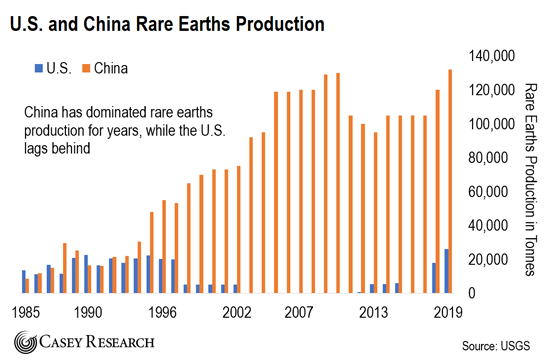 Lately, though, groups like the Department of Defense (DoD) and the Senate took notice of America’s mineral shortage. Rare earths, for example, are critical to the military. They’re used to make high-tech magnets that help missiles target and bombers fly.

Depending on China for the rare earths in these military applications seems ludicrous. That’s why the DoD recently unveiled a massive funding program for U.S. rare earths mining projects.

But this month, America took a much bigger step toward resurrecting mining. President Trump himself declared it an official state of emergency.

He started by saying that “a strong America cannot be dependent on imports from foreign adversaries for the critical minerals that are increasingly necessary to maintain our economic and military strength.”

Now, Trump’s been a backer of strategic minerals policy basically since he took office. One of his first moves was creating a list of 35 elements and minerals America needs to focus on.

But his latest order goes a major step further. Here’s what he wrote:

I therefore determine that our Nation’s undue reliance on critical minerals, in processed or unprocessed form, from foreign adversaries constitutes an unusual and extraordinary threat… to the national security, foreign policy, and economy of the United States. I hereby declare a national emergency to deal with that threat.

Triggering a state of emergency in mining is a big escalation. It requires some of the top government agencies to consult together – like Departments of Defense, Commerce, Treasury, and Interior.

And they have to do it fast. Within 30 days of the order, all of these agencies have to submit a report to the President on options for enhancing American mining.

This is very big news for U.S. exploration and development projects.

And actions like this from the government are catching the attention of the private sector.

Companies on the Ground Are Making Big Moves in Mining

Governments can be fickle. But businesses make decisions based on the bottom line.

Those investors don’t blow with the winds of politics. They also have massive pools of capital – and can deploy it quickly.

For example, Tesla, one of the world’s most prominent companies, made big moves in mining the past few weeks.

On September 15, Reuters broke the story that the company might invest in Giga Metals, a Canadian nickel mine.

That news rocketed Giga Metals’ share price over 300% in a couple of trading days. This is an impressive chart. 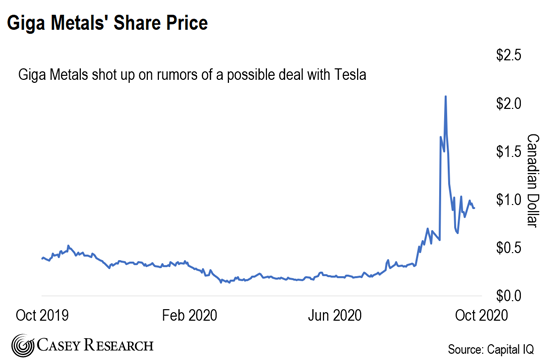 These developments show that people “on the ground” are worried about the supply of critical metals. And that’s where our opportunity lies…

Regular readers will know I’ve spent my 20-year career traveling the world… to scope out these types of developments firsthand.

Unfortunately, due to the pandemic, I’m stuck behind the Canadian border right now.

It’s sitting on a $35 billion fortune. And Big Tech is desperate to get their hands on it.

To see the shocking footage of what we uncovered… and how you can stake a claim on it today… just go right here.