That’s the federal minimum wage in the U.S…

And in California, you could pay more than that for a single gallon of gas.

Think about that. If you use one gallon of gas to drive to work at a minimum wage job… your first hour is paying for your transportation.

It’s also the first time in history that gas prices are above $4 per gallon in all 50 states.

Not to mention the other number you see at gas stations…

As I explained yesterday, diesel fuel prices are spiking faster than oil.

And rising prices aren’t unique to the U.S.…

In the Eurozone, inflation hit a record 8.1% in May amid surging energy and food costs. This is the highest annual level since the euro was created in 1999.

Worse, it looks like inflation is here to stay… just as I’ve been saying.

I was wrong about the path inflation would take. There have been unanticipated and large shocks to the economy that have boosted energy and food prices and supply bottlenecks that have affected our economy badly that at the time I didn’t fully understand.

We understood. That’s why I’ve been working on a project to keep you – Main Street investors – ahead of this wealth-busting trend.

It’s a way to harness “the Super Spike Window.” It’s a period where inflation runs wild – and creates massive wealth in a few types of stocks…

It was a tough time. Economic growth slowed and prices spiraled upward. There was growing social unrest, like we’ve seen in recent years.

But it wasn’t bad for everyone.

Investors in a few “weird” spots made an absolute killing. Here’s a chart of one of the key assets that benefited from the inflation surge. 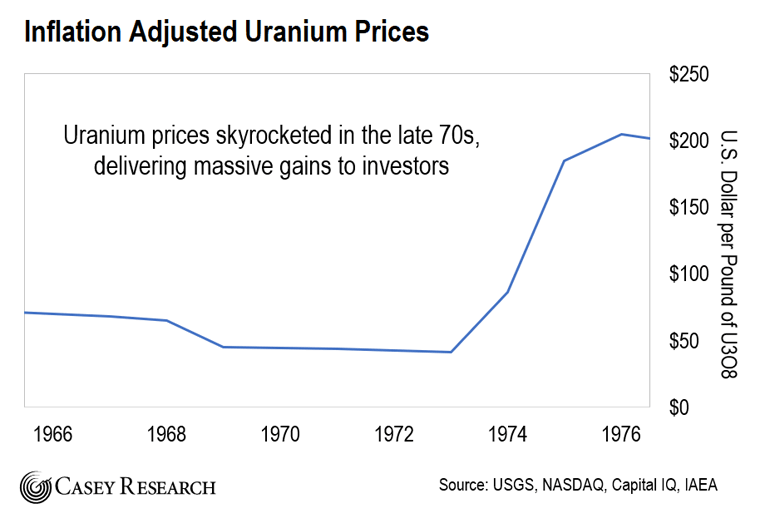 Uranium is a metal used in powering nuclear plants. In the late 1970s, it “super spiked” from an inflation-adjusted $50 per pound to over $200.

That spectacular run drove uranium stocks into a frenzy. It’s a small space – and most investors missed it. But the ones paying attention made fortunes.

And it wasn’t just uranium that soared during the 70s and 80s’ inflation scares.

Investors who caught these Super Spikes made some of the most exceptional gains of the last century. In some cases, like with uranium, the runs happened unbelievably fast… within a matter of months.

You’re probably wondering: how do the Super Spikes take place?

When buyers see prices for basic goods rise, they panic… worried they’ll run out of reserve.

And if an end user ran out of supply, it would be disastrous. They’d have to shut down massive facilities, causing huge losses.

So instead of incurring these massive costs, end users scramble to buy all the oil, silver, or uranium they can. And that supercharges the hike in prices.

With higher prices, investors start piling into the commodities… resulting in massive gains like the 2,600% I mentioned above.

The Next Super Spike Window

Tesla got worried because nickel supply is drying up. The nickel market is so tight, prices went up over 200% in a single day.

That’s a classic pattern for a Super Spike. And it’s not just nickel, either.

Uranium prices more than doubled over the last several months. Same with oil.

So get ready for the next phase of the Super Spike: investor money flooding into inflation-linked assets. They’re about to unleash a lot of money into safe-haven commodities.

The Sprott Physical Uranium Trust, for example, is a new investment firm that’s buying physical uranium. It’s got $3 billion to pour into this buying.

That could cause massive price spikes in the uranium market.

Like most investors, you might be worried about putting money into these Super Spikes. But you don’t have to trade physical metals to profit during inflation booms.

Instead, you can use stocks for commodities (like nickel, oil, and uranium)… which often do better than the hard assets themselves.

One good example is that since January, rising inflation has driven physical gold up about 11%. At the same time, the S&P/TSX Global Gold Index – a basket of leading gold stocks – has surged 36%.

Just imagine what stocks will do if physical gold prices rocket 1,820%. That’s exactly what they did in the 1970s Super Spike.

How to Harness Super Spikes

If inflation keeps spiraling (the way buyers are expecting), this Super Spike Window will burst wide open. That means massive profits, maybe in a very short period of time.

And in today’s environment, this could be the way to protect your wealth. It’s something all investors should at least consider.

Because this is such a huge deal… I’m working on a special broadcast next Wednesday, June 8 at 8 p.m. ET to lay out how you can access the Super Spike window… and make sure to stay ahead of inflation.

P.S. So you don’t miss anything leading up to this emergency broadcast, sign up for text alerts right here. I’ll send you a free gift – valued at $1,795 – just for signing up.

You have nothing to lose.