Justin’s note: As we’ve been covering in the Dispatch all this past year, the commodities sector is gearing up for a record-setting bull run. And our top commodities analyst David Forest is way ahead of the trend.

Recently, Dave took a trip out to Silicon Valley. There, he made a surprising discovery about how Silicon Valley insiders are waking up to the coming commodities bull… and shares the under-the-radar way that you can profit.

“Mining? You mean, like, digging stuff out of the ground? That’s so cool!” said the young fellow in the sports jacket and track pants.

The young fellow in front of me was not one of those people.

He was a tech investor – a member of the Silicon Valley inner circle that populates the San Francisco Bay Area, where I’d stopped on my way down to South America to look at copper projects.

But he was very interested in mining – pressing me with questions about finding and producing metals like nickel and lithium.

After talking awhile, I realized he knew quite a bit about these metals. In fact, he told me he’d been following these markets closely ever since he heard Tesla’s CEO Elon Musk talk about them as part of the company’s earnings conference call.

This wasn’t just academic curiosity. He wanted to know how he could get investment exposure to metals that firms like Tesla use in the batteries for their electric vehicles (EVs).

Up until recently, metals might as well have appeared from a Stargate or been created by nanobots in a laboratory, for all the average Silicon Valley professional knew or cared.

You see, EV batteries require a lot of specialty metals like lithium, nickel, and manganese.

And these metals aren’t easy to find.

Only four countries on Earth produce lithium in significant quantities: Australia, Chile, Argentina, and China. Manganese also has a skinny list of sources, which includes murkier locales like Gabon and South Africa.

So what happens when limited supply meets wildly rising demand for metals from the EV battery space? After all, the EV battery industry is projected to grow by 32% yearly for at least the next decade.

Turns out, faced with metals shortages, tech companies started taking matters into their own hands.

April 2018 saw the beginning of an abrupt pivot in sourcing strategy for tech firms. That’s when Japanese tech giant SoftBank Group – which manages a $100 billion technology fund – announced it was buying directly into mining.

SoftBank got into the game by investing $99 million into mining firm Nemaska Lithium, taking up to 9.9% control of the company. (To be clear, I don’t recommend buying Nemaska Lithium today… but it shows just how big the battery metals trend is becoming.)

More important than corporate ownership, SoftBank also has the right to buy 20% of the lithium supply coming out of Nemaska’s mine each year.

• These end users were going straight to the source…

And it’s not just SoftBank…

A few months later in June, Bloomberg reported that Apple was in talks to buy battery metals directly from miners. This shows that even industry giants are worried about access to scarce battery components.

Geopolitical intelligence platform Stratfor summed up tech’s new love affair with mining in a July article, saying that “makers and users of the world’s batteries are scrambling to secure the vital raw materials needed to produce the lithium-ion cells that will power electric vehicles around the globe.”

• That’s a huge development for the mining business…

A tech group like SoftBank single-handedly has access to capital equal to the amount that flowed into the entire global mining industry in 2017.

Add in Apple, Tesla, Panasonic, and other battery makers and users, and the amount of capital hunting for mining investments becomes absolutely staggering.

Not only do tech firms need metals – they need them from the right places on the planet.

This means countries that are legally and ethically acceptable, especially to politically correct peers in Silicon Valley.

This means a lot of attention is coming to battery metals mines and projects in places that are less dangerous, including the U.S., Canada, Australia, and Finland. Watch for more tech-backed deals coming down the pipe as Silicon Valley unfolds its plan to revolutionize mining.

I believe tech investors like SoftBank and others are going to focus on battery metals mining companies which are in the process of building new mines.

For a simple way to capitalize on this major trend, you can invest in the Global X Lithium & Battery Tech Fund (LIT). It invests in a broad basket of companies involved in lithium mining, lithium refining, and battery production.

We also have a number of plays that fit the bill in our International Speculator portfolio, and we’ll be searching for the very best investments in this space and covering all the details going forward.

P.S. I just released a brand-new video presentation that details one of the best money-making opportunities I’ve come across in my career. This isn’t something you’ll hear about from the mainstream media. But a radical new technology is about to take down the world leader of electric vehicles…

And flood a tiny $2 stock with a massive windfall starting December 1. Click here to learn more.

Today in the mailbag, feedback on Doug Casey’s most recent interview continues to roll in…

Doug, I’m surprised you missed the answer staring Trump in the face. Make identifying the supporter’s priority number one. Next, send two nice people from ICE to their offices and explain that if the caravan is not turned around by sunrise tomorrow, you and several dozen of your fellow officers will be returning. Then explain that under immigration laws of the U.S., they will be charged as an accessory and will thus face felony charges and arrested. Oh, and make sure you explain the part about human trafficking and the forfeiture penalties. Yes, your offices, your houses, your cars, your bank accounts, etc. By sunrise, you will not find one migrant, much less a “caravan.” Problem solved.

It was idiotic. Trump pumped up the fear of the caravan to sway the base. Immediately after the election, the coverage, the rhetoric, and the issue all disappeared, even on Fox. Wake up.

You’d better fill up your gas tank soon… And a few canisters along with it.

Because right now, there exists a plot to disrupt the global oil markets on an unprecedented scale. Some say gas prices could hike to $16 a gallon in the next few weeks…

That’s bad news for holiday travelers. But smart investors are preparing to make a fortune. Learn how you can be one of them. 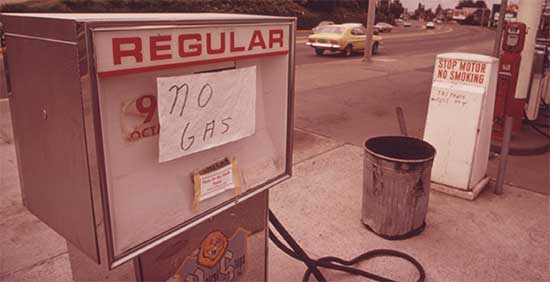