It was innocent at first. Frank and John started by conning travelers in fixed card games. Then they moved onto identity fraud. Finally, when they robbed a nearby post office, there was no turning back.

In 1864, Frank and John Reno started the Reno Gang. They were the first “Brotherhood of Outlaws” in the U.S. They went around terrorizing small towns in the Midwest for years.

On October 6, 1866, they made history. That day, the Reno Gang boarded an Ohio and Mississippi Railway train in Seymour, IN. It wasn’t the first train robbery in history, but it was the first robbery of a moving train.

The Reno Gang’s idea was to stop the train in a rural area. Once there, they could go about their business without much interference.

The plan worked. They made off with $16,000. More importantly, they started a trend. Other gangs took notice.

With a booming economy and expansion westward, trains typically carried large amounts of cash. The isolated train routes made trains easy targets. That’s why Butch Cassidy’s Wild Bunch specialized in robbing trains – because it was so easy.

But the railroad owners and their customers wouldn’t take the robberies lying down. They started installing massive safes and employed armed guards. The change made robbing trains much more dangerous.

Eventually, fate caught up with outlaws like the Reno Gang… so did vigilante justice. A mob lynched 10 of the gang’s members, including the Reno brothers.

Picking Up the Pieces of Civil Unrest

Today, we’re seeing a surge in civil unrest. Violent protests and riots in cities like Portland and Seattle are leaving a trail of destruction in their wake. Rioters are looting businesses and, in some cases, burning them to the ground. They’re causing billions of dollars in damage.

At the same time, elected officials in some of those communities are actively calling to disband their local law enforcement. That leaves the peaceful, law-abiding citizens and businesses left to pick up the pieces.

This could just be a start. What started in the name of social justice could accelerate with a spiraling cost of living.

So far, we’ve seen about $3 trillion in stimulus to combat the effects of the COVID lockdowns. But trillions more are on the way.

That could kill the lower and middle classes. Costs of everyday goods are already on the rise. Unlimited quantitative easing (QE) could add fuel to the fire when prices surge. That would make today’s violence look like a playground shoving match.

In the 1800s, individuals and local shops turned to private security forces for protection. They needed a way to fight back against violent gangs.

People today are no different. They still want protection for their property so they can make a living. That’s why I think more and more, they’ll turn to hiring private security firms.

As I said above, civil unrest is gaining in many cities across the country. Most people chalk it up to political division. But here at Casey Research, we don’t view things through the lens of popular opinion. We try to look at the big trends and find ways to invest around them.

That’s why I view the rioting and violence as something different. Social justice isn’t the cause of it. That’s just an excuse. What’s causing violence in the streets is the ever-growing wealth gap. And it’s only going to get worse.

Take a look at the following chart. It shows the balance sheet at the Federal Reserve. 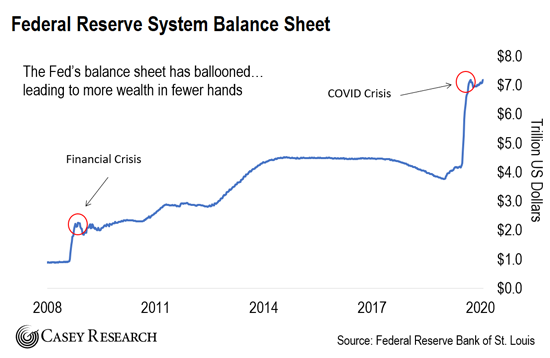 Notice two points in the timeline. The first was back in 2008, when the Fed added about $1.3 trillion to its balance sheet. At the time, that was a massive increase. But that pales in comparison to the $3 trillion increase so far this year.

This is nothing new for the Fed. It’s just an extension of a growing balance sheet over several decades. And it’s leading to more wealth in fewer hands.

A Widening Wealth Gap… And a Silent Tax 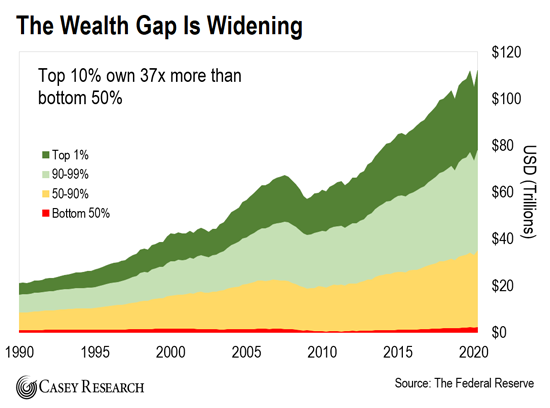 In fact, according to the Bloomberg Billionaires Index, the top 59 wealthiest Americans have more wealth than half the U.S. population.

Yet we still have promises of more stimulus to come. That will only continue to increase the wealth gap.

That spells doom for the middle and lower classes. What the Fed fails to see is that its policies are causing a silent tax on the majority. We’re already starting to see that in the form of cost inflation of everyday goods like food.

However, it’s not just an index telling us something’s not right.

How to Position Yourself to Profit

According to a report from The New York Times, an estimated 1.5 million New Yorkers can’t afford food today.

Next door in New Jersey, the Community FoodBank of New Jersey warned 1.2 million state residents will be food insecure by the end of the year.

Violently protesting in the name of social justice is one thing. But when people go hungry, there will be rivers of blood in the streets. We know this from places like the Middle East and Venezuela today.

In fact, the situation in Venezuela is so bad, rioters robbed a truck transporting corn at gunpoint.

It all comes down to money. Or the lack of it. When you need to use more and more of your paycheck to buy less and less food, that’s when we’ll see a true uprising.

Private security companies do well during times of economic hardship. More and more businesses will call on them to protect their goods. And not just for cash. I wouldn’t be surprised to see armored food convoys crossing the country.

That’s why I think now is a good time to get positioned in the private security sector.