“I’m from the government and I’m here to help.”

They’re the nine most terrifying words in the English language. At least that’s what former President Ronald Reagan joked about many times over his political career.

Getting a knock on your door or a call from the government can be scary. Your palms start sweating. Your heart races. Your mind starts thinking about that time you found a pile of cash on the ground, wondering if they know…

Luckily, most of you won’t ever get a call from a government agency like the FBI or the dreaded IRS. But you do bear the consequences of government policies that can kick you in the teeth.

Take the past few years as an example. COVID-related spending flooded the market with cash. Handing out checks directly to the population made people feel good.

And when people have extra cash, they tend to spend it.

The demand for goods and services went ballistic. Companies and suppliers – strained from the breakdown of supply chains – couldn’t keep up.

The result was a massive spike in inflation. 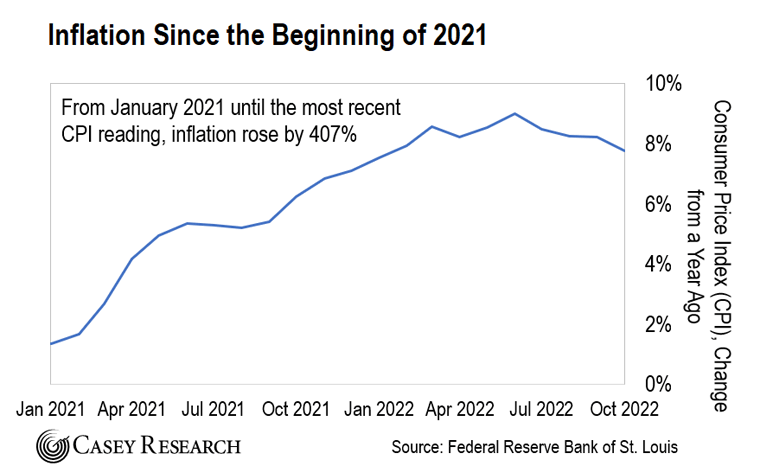 But it was easy to see this coming if you just knew where to look.

It’s All the Same

For years, I’ve told readers how it doesn’t matter who is running things. No matter which party is in charge, all politicians spend money like a drunken sailor at last call.

For instance, one thing I like to show is how the U.S. government debt load just about doubles under each two-term president. (Or every eight years.)

In two years with Biden, nothing is much different. The debt is up over 10%.

Combined with Trump, it’s up 53% in six years. Which is to say it won’t take much for it to double again over an eight-year period. 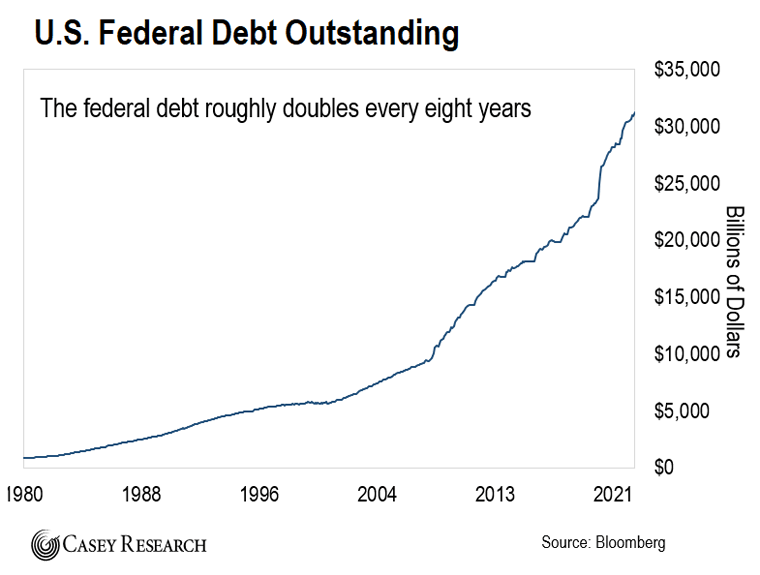 What enabled a lot of this spending to explode higher are two things: Nixon closing the gold window in 1971 and cheap money. By cheap money, I mean the U.S. Treasury borrowing at low rates for decades partially due to the policies of the Federal Reserve.

It’s that cheap money that helped enable one of the greatest bull markets of all time over the past decade. It’s also why companies with no business to speak of were able to go public with nothing more than hopes and dreams.

They hyped up their soon-to-be “game-changing” and “disruptive” products only for investors to realize it was nothing but fluff.

Now it’s all coming to a head. Inflation is still a problem. Business is slowing down everywhere you look. “Zombie” companies – firms that don’t produce enough profit to pay their debts – are failing.

And the situation is reminding some of the 1970s stagflation.

Which is why some people think Fed Chairman Jerome Powell continues to push for more interest rate hikes. He’s trying his best to be more like Paul Volcker – not Arthur Burns.

Only time will tell.

But it’s not just easy money that created the mess we’re in today. It’s bad government policy and waste that can make things worse.

Festivus for the Rest of Us

For fans of one of the greatest sitcoms, Seinfeld, you’re probably familiar with the made-up holiday Festivus. It comes around each year on December 21. And instead of a Christmas tree, you have a metal pole.

In real life, it also happens to be the day Kentucky Senator Rand Paul likes to release his Festivus Waste Report.

In the report, he highlights billions of dollars of wasteful spending funded by taxpayers. And all of this spending first passed through the halls of Congress in bills with a completely different headline.

For instance, in 2021, Paul highlighted things like a $465,000 grant to teach pigeons how to play slot machines. Or a $1.3 million study on how hearing bad news decreases happiness levels.

He even highlighted how the Social Security Administration overpaid beneficiaries in 2019 by $4.2 billion.

All of this taxpayer-funded spending adds up. So it’s no wonder why the federal debt tops $30 trillion today.

These policies carry consequences. It’s the consequences that no one thinks about initially. Like inflation. Or the stock market crashing.

But I’m not trying to point out all the negatives. There are always positives no matter the situation. You just need to know where to look.

It’s All in the Details

There’s a difference between calling government policy bad and knowing how to use it to your advantage as an investor.

There’s no better example than one of the best-performing assets of the past two years: oil.

Many investors look at the rise of oil and oil company stocks as an anomaly. For years, major groups and institutional funds promised to all but do away with the industry. They shunned investment in fossil fuels and looked to fund projects of alternatives like wind and solar.

Just that alone was enough to be bullish on oil since it’s still one of the most important commodities on Earth.

Then came 2021 and President Joe Biden.

From day one, he told us the playbook. In fact, his first executive order (EO) as Commander in Chief carried the title: “Protecting Public Health and the Environment and Restoring Science to Tackle the Climate Crisis.”

Sounds like a noble goal. After all, the environment is important to the long-term health of the human race.

But so is energy production. I would argue access to cheap energy has done more to lift people out of poverty than anything in human history.

Finding safe ways to transport that energy is also important. The cheaper you can do that, the better.

Which is why anyone paying attention at the time saw this as policy misstep number one. That’s because this EO wasn’t about “protecting public health.”

It was all about revoking the permit for the then-controversial Keystone XL Pipeline. It completely ignored the fact that pipelines are one of the cheapest ways to transport cheap energy sources like oil and natural gas.

When the price of energy rises, so does everything else. Cutting off cheap access to that energy is one way to see prices rise.

So while this one EO was the sound of the starting gun, it was only the first act in what we now know was the start of a bull market in oil.

And it all comes back to the details. The headline says one thing. The details say something else.

It’s why reading between the lines of policies like this EO is important. It’s part of the reason why we’ve led subscribers to gains of almost 13x in a little over two years in oil giant Occidental Petroleum.

But oil is just one case.

As many of you know by now, there’s a crisis at the southern U.S. border. Hundreds of thousands of migrants are crossing the border every month.

And it’s not just a problem for border towns. It’s also creating a problem at migrant facilities.

It’s why we recommended one little-known company with a solution: Target Hospitality. The company builds and operates housing communities. In the past, that was mainly for the oil and gas industry.

But now, it’s taking advantage of its expertise to help the government in a tough situation. It’s also why subscribers are sitting on gains of 18x in about 18 months as we write.

The point is, “I’m from the government and I’m here to help” may send shivers down your spine. But if you know how to read between the lines, you can turn what you see as a negative into a market-beating edge for your portfolio.

Markets today look different than the easy money times of the 2010s. It’s going to be much harder to navigate the markets in the years ahead.

However, not all is lost if you know where to look.

P.S. As I said above, the coming years may be some of the toughest you’ll face as an investor. We’re seeing the consequences of bad policy by both the government and our financial institutions.

Knowing how to navigate these choppy waters may be one of the most important steps you take this decade.

And there’s no better person at “reading between the lines” than my colleague Nomi Prins.

Regular readers know how much we value boots-on-the-ground research. It’s one of the best ways to learn how to position for the future or find hidden meaning in the markets.

Nomi uses a similar approach with her investment strategies. She’s constantly on the road meeting top-level executives and her contacts in the upper echelons of government.

So when it comes to knowing how to steer the ship, there are none better than Nomi.

And on Thursday, January 12 at 8 p.m. ET, she’s going to reveal a strategy she’s never recommended before. It’s a strategy that Wall Street pros use every day to profit off their insider knowledge of Washington… and it’s a tactic you can use to make up to seven times your money.

Best of all, Nomi is going to reveal the name of a winner and a loser during this event.

So if you want to learn more about how to find the next way to profit from government policy, go here to sign up.