The last three months have proven me right: Gold is the place to be during times of uncertainty.

Check out how bullion and gold mining stocks have crushed the Nasdaq and S&P 500 during the recent market correction:

I plan to keep a lot of exposure to gold, silver, and other metals.

After all, the Federal Reserve has unleashed a storm of new money this year. Since March 11, the U.S. monetary base (the total amount of money in circulation) has risen by $1.5 trillion.

Adding trillions of new dollars to the economy is inflationary… so it benefits commodities in general.

But there was another group of metals that did even better. And most investors don’t know about them. 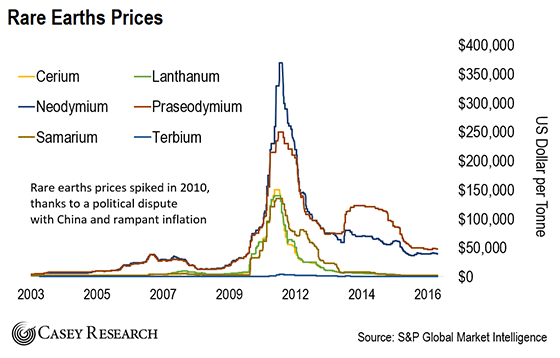 But it wasn’t just inflation that made these metals soar. At the time, China – the world’s top producer of rare earths – threatened to cut off supply after a territorial dispute with Japan. These dual catalysts of inflation and geopolitics sent rare earths skyrocketing.

And today, we’re seeing history repeat itself… but this time, we can take advantage…

Rare earths are metals with a license to kill. They’re used in some of the highest-tech weapons systems on the planet, including F-35 fighter jets, naval destroyers, nuclear submarines, and even night vision goggles.

Rare earths are literally a matter of national security. So you’d think America would have closely guarded its supply.

But in fact, the U.S. intentionally cut off its homegrown rare earths mines. Let me explain.

Rare earths typically form with other elements – most often the radioactive elements uranium and thorium, which can be used to manufacture nuclear fuel.

And in the 1970s and 1980s, world powers were concerned about rogue states developing nuclear weapons. Much of the Western world signed onto new conventions that restricted handling nuclear materials – including mining rock that had elevated levels of uranium or thorium.

The result: American mines producing rare earths as byproducts from iron ore and other materials suddenly had to shut down.

China, however, didn’t sign onto these rules. Its mines continued producing rare earths as cheap byproducts. Chinese leaders used the world’s nuclear “time out” on mining to grab a stranglehold on the rare earths business. 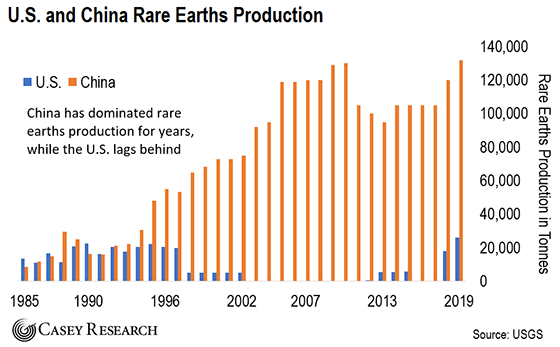 In the 1980s, the two nations were running neck-and-neck. But starting in the early 1990s, China passed the U.S. as the world’s largest rare earths producer. Since then, China’s production exploded. America’s output shriveled to near nothing.

Today, there are no U.S. makers of rare earths alloys or separation facilities to process rare earth ore. And the only rare earths mine in America is part-owned by a Chinese company. So America’s most advanced military technology is completely dependent on China.

But recently, the Pentagon decided to do something about it.

The Plan to Save America’s Rare Earths Supply

In December, military officials announced they’re getting into rare earths.

To find out more, I spoke privately with rare earths experts in the defense space. These professionals have testified directly to White House committees and the Department of Defense on securing supply. Some of them are even involved in writing bills that will head to Congress.

They told me that military officials are looking at sites for mining rare earths, as well as facilities where rare earths could be separated and upgraded into usable metals.

Remember, America is low on working rare earths mines right now – and there are no domestic operational facilities for processing and separating rare earths or creating the alloys that go into high-tech applications.

The Army’s initial announcement caused a spike in rare earths stocks. Since the correction, some of these stocks have fallen. But I believe they’ll climb higher once more details on the Army’s plans emerge.

And I believe that any funding announcements will have a huge effect on companies with domestic rare earths mines.

The Army is studying all options for domestic projects. But a few sites appear to be clear leaders in the race for big military funding.

We have what I believe to be one of the frontrunners for this funding in our International Speculator portfolio. In fact, this stock doubled shortly after I initially recommended it last year, giving my subscribers a big gain in just a few months.

And it could soar again depending on what the military decides to do next. I talked about this in my latest issue, which subscribers can access here.

In the meantime, you can take a look at the VanEck Vectors Rare Earth/Strategic Metals ETF (REMX). Each company in this index must gain at least 50% of its revenue from rare earths. So it’s a solid way to secure exposure to these metals.

P.S. There’s another exciting way to play this trend that involves a $1,400 5G phone… and a $2.7 trillion secret you’ll never hear in the mainstream press. Click here for all the details… as well as an opportunity for potential 60x gains over a matter of months.