A crisis is unfolding in America.

As you know, millions of Americans have been decimated by the economic damage of the coronavirus.

To stave off total collapse, the federal government has been forced to take desperate action.

Interest rates have plummeted… evictions paused… and Congress even went so far as depositing checks directly into American bank accounts.

Yet… look around. Americans are still piling into food lines. Millions are still jobless. The country still sits on the edge, following riots and protests… the siege on the Capitol… and growing political division.

And as bad as this is, it could get much worse…

A Spike in Civil Unrest

Over the summer, we saw a surge in civil unrest. Violent protests and riots in cities like Portland and Seattle left a trail of destruction in their wake, causing billions of dollars in damage.

Most people chalk the unrest up to political division and social justice. But here at Casey Research, we don’t view things through the lens of popular opinion.

That’s why I view the rioting and violence as something different.

Social injustice isn’t what’s causing violence in the streets. That’s just an excuse. I see it as the ever-growing wealth gap. And it’s only going to get worse.

But fortunately, at Casey Research, we look for the big picture trends that will come out of this surge in violence… and ways to protect (and grow) our wealth in the face of crisis.

And below, I’ll share how you can protect yourself – and your wealth – from civil unrest… And profit.

The Wealth Gap Is Widening 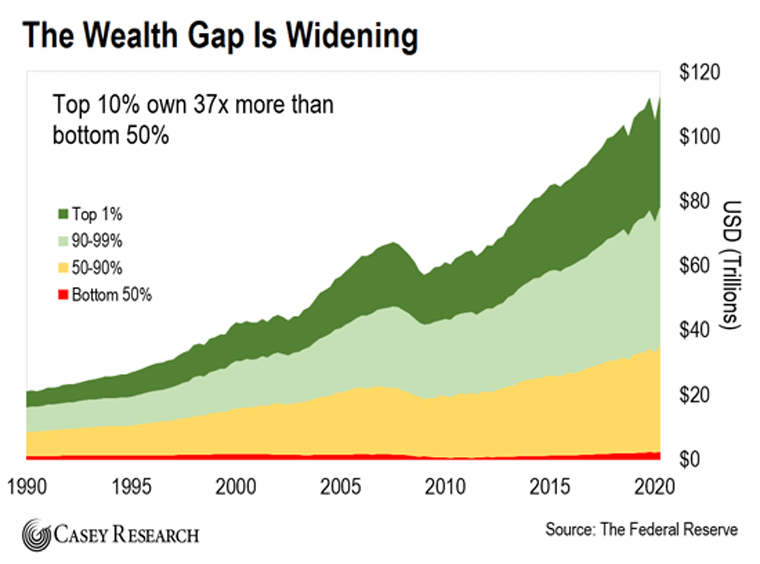 In fact, according to the Bloomberg Billionaires Index, the top 59 wealthiest Americans have more wealth than half the U.S. population.

The Fed is blind to the fact that its policies have that effect. We still have promises of more stimulus to come. That will only continue to increase the wealth gap.

That spells doom for the middle and lower classes. The Fed fails to see that its policies are causing a silent tax on the majority… as the cost of everyday goods like food continues to rise.

However, it’s not just an index telling us something’s not right…

According to a report from The New York Times, an estimated 1.5 million New Yorkers can’t afford food.

Violently protesting in the name of social justice is one thing. But when people go hungry, there will be rivers of blood in the streets. We know this from places like the Middle East and Venezuela.

In fact, the situation in Venezuela is so bad, rioters robbed a truck transporting corn at gunpoint.

It all comes down to money. Or the lack of it.

And this all comes as elected officials in communities across the U.S. are actively calling to disband their local law enforcement. That leaves the peaceful, law-abiding citizens and businesses left to pick up the pieces.

Los Angeles police Chief Michael Moore said, “We have a pandemic of crime right now… These cuts couldn’t come at a worse time. My ability to put added resources right now is hampered.”

As people use more and more of their paychecks to buy less and less food… and the “defund the police” movement picks up steam… that’s when we’ll see a true uprising – and more violence.

In fact, regular readers know our founder, Doug Casey, sees a breakup of the U.S. as inevitable.

But as this crisis plays out, there is a way for investors to keep themselves shielded from the worst effects. In fact, if you act quickly… you can come out of this storm safe, secure…. And ahead in your investment account.

I’ll give you all the details on my top two picks to ride this wave of civil unrest in my urgent briefing right here.